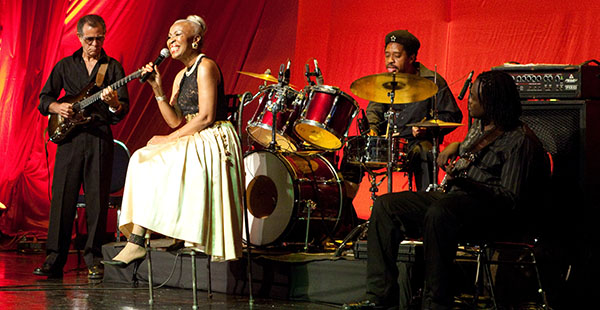 TORONTO, Ontario – Following on the heels of the successful Simply Myrna Revue in Jamaica for the last three years, the banquet hall of the Hilton Double Tree Hotel By The Airport will be transformed into a swanky night club scene for the show’s debut in Toronto.

Jazz icon, Myrna Hague, will again delight audiences with her on-stage versatility and wide repertoire of songs, along with her special guest, the incomparable Ernie Smith, one of Jamaica’s prolific songwriters and recording artists.

Smith, known for his powerful and unique baritone vocals, has received many accolades for his contribution to the entertainment industry. Among them are: the 1972, Yamaha Music Festival Award in Japan for Life Is Just For Living, a song originally written for a Red Stripe commercial; and as a songwriter for Tinga Stewart’s Play De Music, which won the 1974 Festival Song Contest.

In 1973, he also received a well-deserved honour from the Jamaican Government: the Badge of Honour for Meritorious Service in the Field of Music. Among Smith’s many hits from the 60s and 70s are: Bend Down, Duppy or Gunman, Ride On Sammy, One Dream, and Pitta Patta.

Promising an equally entertaining show as the one in Jamaica, the producers of the show say, that Hague and Smith will be backed by the Toronto group, the Jason Wilson Band, with special guest, renowned drummer, Desi Jones, from Jamaica.

Toronto’s own, the award-winning Heritage Singers, will bring its colourful and elegant theatrical presentations of Caribbean folk songs and dance to add to the evening’s musical extravaganza. Disco music for dancing will be provided by DJ Eugene @ Psychosoul.ca

Tickets for the Simply Myrna Concert, which is being held on Sunday, August 4, under the auspices of the Jamaica Consul General for Toronto, Mr. Seth George Ramocan, are $45 in advance and $50 at the door. Starting with pre-show cocktails at 7:00 PM, the concert will commence at 8:00 p.m.