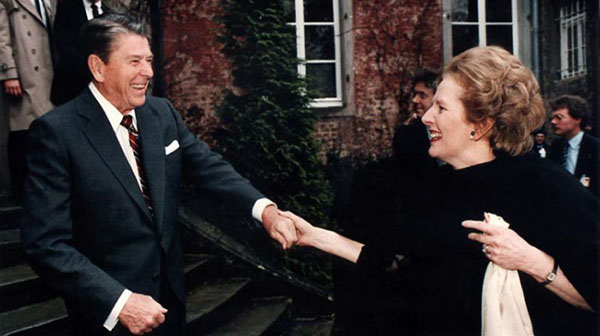 Britain Was Against Invading Grenada In 1983

By Nelson A. King

LONDON, England CMC – Britain had been against United States plans to invade Grenada in 1983, according to documents released Thursday by the National Archives, here.

The documents indicate that then Prime Minister, Margaret Thatcher, and United States president, Ronald Reagan, were at odds over the plans to invade the Caribbean island after its then left wing leader, Maurice Bishop and several of his ministers were executed by sections of the People’s Revolutionary Government (PRG) headed by then deputy leader, Bernard Coard.

Coard and several others, including his wife, Phyllis, were sentenced to lengthy jails terms but were all released a few years ago under new sentencing procedures.

Soon after his release from prison, Coard appeared on a television program making a direct appeal to the President Barack Obama to bring closure to the period that began in 1979 when Bishop and Coard and members of the then New Jewel Movement (NJM) overthrew the then Eric Gairy government in the Caribbean’s first successful coup.

The documents regarding “Operation Urgent Fury” in 1983 show Thatcher’s deep concern about Reagan’s decision to invade Grenada in the wake of Bishop’s assassination.

His death in October 1983 resulted in a United States-led invasion of the island and the body of the former prime minister has never been recovered despite pleas from his family and successive governments.

In her memoirs, published by the Margaret Thatcher Foundation, Thatcher wrote on October 25, 1983 that she was “deeply disturbed” by the US plans.

“At 7.15 in the evening of Monday, 24th October, I received a message from President Reagan while I was hosting a reception at Downing Street. The President wrote that he was giving serious consideration to the OECS (Organization of American States) request for military action.

“He asked for my thoughts and advice. I was strongly against intervention and asked that a draft reply be prepared at once on lines which I laid down,” she wrote.

“I then had to go to a farewell dinner given by Princess Alexandra and her husband, Angus Ogilvy, for the outgoing American Ambassador, J.J. Louis, Jr. I said to him: “Do you know what is happening about Grenada? Something is going on. He knew nothing about it,” Thatcher said.

She writes that she received a telephone call during the dinner to return immediately to No.10 Downing Street, and that by the time she arrived late in the evening, a second message had arrived from Reagan in which he stated that he had decided to “respond positively to the request for military action”.

Thatcher, who died in April this year, wrote that she immediately called a meeting with top Defense personnel, “and we prepared my reply to the President’s two messages, which was sent at 12.30am”.

The late British leader says “there was no difficulty in agreeing (to) a common line,” adding that her message stated: “This action will be seen as intervention by a Western country in the internal affairs of a small independent nation, however unattractive its regime.

“I ask you to consider this in the context of our wider East/West relations and of the fact that we will be having in the next few days to present to our Parliament and people the sighting of Cruise missiles in this country.

“I must ask you to think most carefully about these points. I cannot conceal that I am deeply disturbed by your latest communication.

“You asked for my advice. I have set it out and hope that even at this late stage you will take it into account before events are irrevocable,” she added.

According to the memoirs, Thatcher says she followed up 20 minutes later by telephoning Reagan on the hotline.

“I told him that I did not wish to speak at any length over the telephone, but I did want him to consider very carefully the reply which I had just sent. He undertook to do so but said “we are already at zero”.

Thatcher wrote that early the following morning she received a further message in which Reagan said that he had weighed “very carefully the considerations that I had raised but believed them to be outweighed by other factors.

“In fact, the US military operation to invade Grenada began early that morning, after some fierce fighting the leaders of the regime were taken prisoner,” she wrote.

Citing fears of Cuban and Soviet influence and under the guise of rescuing American students at St. George’s University School of Medicine, Washington invaded Grenada, a former British colony, after Bishop was assassinated on October 19, 1983.

The British government files are being made public under rules that allow the release of documents after 30 years.

On the release of the files, the Margaret Thatcher Foundation noted that Grenada, which became independent of Britain in 1974 “and after only five years of unstable democracy, removed the elected Prime Minister (Sir Eric Matthew Gairy) through a coup d’état, while he was visiting the United Nations in New York, lecturing his peers on UFOs (unidentified flying objects), among other things.

“The new Marxist government did not fall into the lovably eccentric category,” the foundation said.

“Its leader, Maurice Bishop, looked to Cuba for guidance and material support and surrounded himself with a thuggish crowd of young militants who duly removed him by a second coup, on 14th October 1983.

“Supporters managed to free him from house arrest, but he and his chief associates were swiftly recaptured and machine gunned to death on the 19th,” the foundation noted.