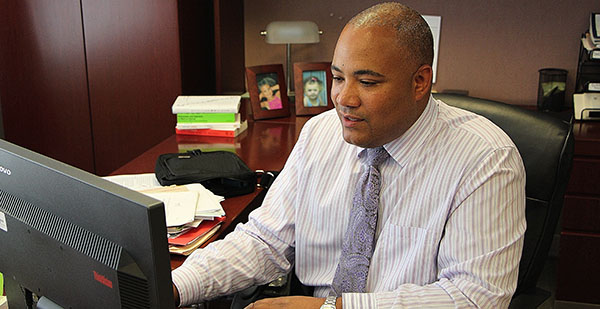 TORONTO, Ontario — With approximately 30 percent of the Ontario population identifying as non-native Canadians, it is imperative that the provincial government develop and sustain programs and initiatives geared toward the continued integration of an ever-growing demographic.

It is refreshing then, to learn that the immigrant experience is not lost on the Honourable Michael Coteau, Ontario’s newest Minister of Citizenship and Immigration, who was appointed by Premier Kathleen Wynn in February of this year.

With a British mother and Grenadian father, Coteau, a first-generation Canadian, is intimately familiar with some of the challenges faced by those who would make Canada home.

As Member of Provincial Parliament (MPP) for Don Valley East since October 2011, the minister takes a hands-on approach to representation. Visibly present in the community, his aim is to make sure that constituents have not only a voice, but also an ear, in the legislature.

It is clear, when speaking with this personable man, that his commitment to quality-of-life is paramount. This quality affects both his professional and personal lives.

Coteau and his wife, Lori, are parents to two daughters, Maren and Myla; he is quick to point out that the two jobs of husband and father are just as important as all his other responsibilities.

What though of the man and the ministry? Pride News Magazine sat down for an exclusive, one-on-one conversation with the minister to find out.

While serving as school board trustee, the Carlton University graduate held a fulltime position as CEO and Executive Director of the not-for-profit organization, Alpha Plus, a national literacy organization, mandated to support adult education through the use of technology. Coteau says these experiences have prepared him for his current positions.

Still considered a rookie in many circles, Coteau says the transition to politics was easy for him. “I worked within a board environment; I spoke the same language as the MPP, the stakeholders and the community groups,” he says.

“The big difference was being in the legislature and working on policy,” the MPP continued.

He believes that the issues faced pre-politics are equally as important as his current obligations. “The work I was doing before and the work I’m doing now affects the lives of people.”

He continues, “The job is a huge responsibility. You have to put the time and energy into understanding the issues, because they can affect a lot of people.”

An integral part of the job is “Getting into the community and continuing to try and extract all those ideas and thoughts, so you can make the best decision that is reflective of your community,” says Coteau.

That manner of thinking is reflected in the way the minister views the trust placed upon him as the head of Ontario’s Ministry of Citizenship and Immigration. Statements throughout our interview indicate that with Coteau’s ear to the ground and his mind full of memories, the migrant mandate is safe.

He shares that, “Coming from an immigrant family, there are challenges that come with newcomer settlement. The one thing that hasn’t changed from the time my family came, to now, is that being in Ontario means that you’re working within a society where we protect each other through different values and legislation.”

Coteau points out that one of the key responsibilities of his job is, “to make sure that it shouldn’t matter where you come from, or what colour your skin is, or what God you pray to, or how much money you have in your bank account, the opportunities need to be accessible to everyone.”

That mandate is coupled with a major initiative of the ministry – the immigration strategy. Minister Coteau reports that the three objectives of the strategy are to, “Attract the best and brightest internationally to Ontario; to make sure that when they [immigrants] arrive, they are set up for success, through programs and services that we can offer; and to leverage the diversity that exists through immigration.”

Coteau’s ministry claims it recognizes that, “Immigration is not a one-way ticket. Newcomers to Ontario arrive with vital ties and connections to their former homelands that can be leveraged to produce economic growth and prosperity for Ontario.”

What is equally as important is the economic growth and prosperity for countries of origin. “We try to attract the best, but there’s responsibility in that as well,” says Coteau. “You can’t just yank the best and brightest from developing regions and not look at ways to help support those developing regions,” he continued.

With half of all new immigrants to Canada making Ontario their home, it is the most multicultural province in the country. Considered a leader in science and the arts and the Canadian economic hub, Ontario is particularly appealing to professionals and artists alike. The population of 12 million people, from 200 countries, speak as many as 130 languages.

Coteau says one of the big issues he hears from the community is the complaint that immigrants are often told that they do not have the experience needed for the Canadian marketplace; or they have too much experience; or they don’t have the right credentials.

He says one of the most notable ways that his government has responded is through the Ontario Bridge Training programs. Coteau relates that the programs “are setup to fast-track foreign-trained professionals into the Ontario economy.”

The Citizen and Immigration ministry says the programs “help skilled newcomers get their license or certificate in their profession or trade, so that they can find employment, commensurate with their skills and experience in Ontario.”

“We’ve invested over the last several years, a quarter of a billion dollars into those programs,” the minister says. He reveals, that some programs offer mentoring opportunities with established professionals to help with the certification or registration process in a particular field.

Minister Coteau adds, he would like to “encourage anyone who is a foreign trained professional, who doesn’t know about these programs, to contact the ministry.”

The tall, handsome Coteau says, his ministry is tackling the issue of appropriate and efficient certification since, when newcomers are successful in Ontario, the province is successful as a whole. This is part of leveraging the international and global experience to benefit Ontario, he adds.

A conscientious Coteau remarks that, “The immigrant experience is challenging in any country, even in a great country like Canada and a beautiful province like Ontario. My job is to make sure that those challenges are diminished, as much as possible, to allow people to accelerate quickly.”

This is the attitude of a man who enjoys a relationship with his community and is eager to take issues of relevance to Queen’s Park. Coteau is proud of his track record and is confident that he has the tools required to help steer the Ministry of Citizenship and Immigration, responsibly, into the future, while adequately representing his Don Valley East riding.