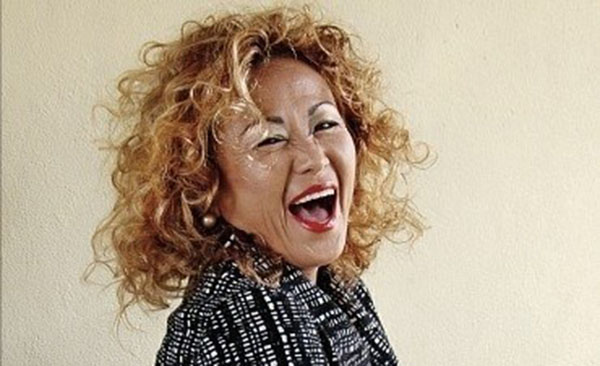 Terri Salmon Stars In Me Get Mi Landed, 2

TORONTO, Ontario – While Jamaican icons, Honourable Louise Bennett Coverly and Leonie Forbes, have essentially set the stage in Jamaican theatre, Terri Salmon is one who is working assiduously to keep the standards high.

Salmon is an award winning actress, who has appeared in a number of local and regional productions, alongside some of the best known and loved Jamaican actors. Her acting career has, fittingly, brought her several accolades and awards. These include the Actor Boy Award for Best Supporting Actress for her role in Karl Hart’s Dem Good Ole Days in 2001. She won the award again in 2009 for her role in Basil Dawkins’ For Better or Worse.

She started out as a dancer at Holy Trinity School with Joy Gordon, whom she credits as the first person to discover her artistic talent. During that time, she was successful in the Jamaica Cultural Development Commissions’ Festival of The Performing Arts, earning gold and silver medals. Her stellar performances and ensuing success prompted a scholarship from the late Joyce Campbell to her dance company — Jamaica Institute of Dance.

From there, Salmon was invited to join the LTM Pantomime as a dancer by Barbara Gloudon. A few years later, Gloudon decided to have a pantomime workshop assisted by the late Rex Nettleford. This exposed Salmon to all aspects of theatre.

This exposure further fuelled her desire to become an actress and opened her up to the realization that she wanted to spend the rest of her life in the theatre.

Since that time Salmon has done at least 12 Pantomimes before being invited by Basil Dawkins to ‘commercial theatre’ with the play Couples. Among Salmon’s acting credits are I’ve Got Your Man, Dutty Wine (UK), Big Yaad, Front Room, Jamaica To Rahtid, Dem Good Ole Days, Kiss Mi Neck, Concubine, Devon Haughton’s Mi Get Mi Landed, among many others in Jamaica.

Salmon credits her success on stage to her ability to “pull the audience”. Furthermore, her intrinsic nature “allows me to lift the script from the page and make the character my own” she says.

Having been in so many pantomime productions and commercial theatre, Salmon says there is just one challenge left for her now, and that’s a one-woman show. “I would love to do a one- woman show, for that, to me, is the ultimate. She was however quick to note: “You have to have comedic timing, which is the hardest to play in an actor’s life.”

She is now a co-host of the popular Jamaican talk show — The Naked Truth —. This dynamic program is aired on CVM television on Sundays at 7PM.

The Naked Truth features four beautiful women discussing and opining their views on various aspects of Jamaican life. They have varying life experiences which augment their credibility and treasured opinions.

“We at CVM have always wanted to do introduce this talk-show format to Jamaica was finding the right mix of women who can deliberate on various topics and engage the audience,” said Shamena Khan, a director at CVM TV.

Salmon’s dramatic and emphatic personality, coupled with her determination, tenacity and discipline, will be highlighted in Devon Haughton’s Me Get Mi Landed ll. The story picks up from a terrific and successful Me Get Mi Landed, which was staged in major cities of Ontario, Canada in 2009.

Me Get Mi Landed ll portrays what happens, four years later, when Ruth used her life savings to start a nursing home, and in comes Pu Pam Pam a long time family friend in need of a job.

We then see Tatti (Terri Salmon) trying to return to Canada but loses her immigrant (landed) status at the airport. Coco — a Christian minded landed immigrant — the housekeeper at the nursing home needs money to save her dying daughter. Barbabas weaves his conniving ways to destroy Ruth.

All questions are answered in anticlimactic, heart-wrenching, comedic, and dramatic fashions. See it for yourself.