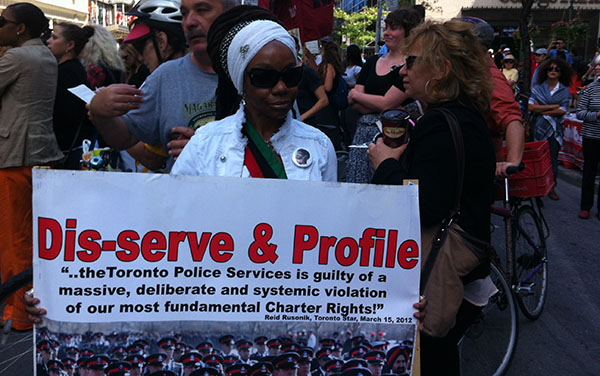 Black Groups Add Their Voice To The Outcry Against Shootings

TORONTO, Ontario — Three prominent organizations in the Black and Caribbean communities in Toronto have added their voices to the outcry against the recent spate of shootings in the city and they want to be included in discussions about solutions.

The Jamaican Canadian Association (JCA), Black Business and Professional Association (BBPA) and Ontario Black History Society (OBHS) have issued press releases regarding the July 16 shooting at a community barbecue in Scarborough which resulted in the killing of 14 year old Shyanne Charles and 23 year old Joshua Yasay and the injury of 23 people.

The JCA, along with other community leaders and organizations, had requested to be included in Monday’s meeting with Ontario Premier Dalton McGuinty, Toronto Mayor Rob Ford and Toronto Police Chief Bill Blair to formulate a long-term action plan.

“It is our hope that this plan will build on past successes and include full implementation of the recommendations outlined in the 2008 Roots of Youth Violence report initiated by the provincial government and developed in consultation with a wide cross-section of stakeholders in Ontario,” said the JCA.

At the June 23 meeting, Premier Dalton McGuinty rejected the mayor’s demand for an immediate funding boost for Toronto policing. The premier promised that the funding would not be slashed in the future.  Ford wanted McGuinty to provide an extra $5 million to $10 million to hire additional officers for the Toronto Anti-Violence Intervention Strategy (TAVIS), in the wake of the July 16 shooting. The premier met with the mayor and police chief Bill Blair for more than an hour in his Queen’s Park office, and promised that his government would provide the current $5 million per year for TAVIS on a newly “permanent” basis. He also pledged to make $7.5 million in Provincial Anti-Violence Intervention Strategy funding permanent.  Mayor Ford will meet with Prime Minister Stephen Harper on Tuesday at a police station in Toronto to discuss concerns around the spate of shootings in the city.

At a press conference last week, Margaret Parsons, executive director of the African Canadian Legal Clinic, said black community leaders had not been invited to this week’s meeting, which she said was unacceptable. “We don’t want to be left out when solutions are crafted. We should be, we want to be and we expect to be at the table,” she said.

The JCA said it views with shock and much sadness the carnage wrought by the unnecessary and brutal shooting in Scarborough on July 16 and yet again Wednesday night in the Lawrence area with another young man a victim of violence.

The organization expressed its sincere condolences to family and friends affected by these shocking incidents, and hopes for a speedy arrest and prosecution of the perpetrators.

In addition, JCA said it would be working closely with the responsible public officials, community organizations and civil society to implement a long-term solution to the continuing problem of gun violence and proliferation of firearms in the Greater Toronto Area.

For almost fifty years, the JCA has been advocating and mobilizing for improved outcomes for youth and families in the Greater Toronto Area. It said that based on its long and successful history serving affected communities, it is uniquely equipped to be a part of the solution and has a vested interest in ensuring that the communities it represents are included in the process.

Meanwhile, the Ontario Black History Society said it is both shocked and alarmed at the recent violence affecting the city. “We particularly offer our thoughts and prayers to the grief stricken families and friends of the victims, 14 year old Shyanne Charles and 23 year old Joshua Yasay and to the residents of this Danzig Avenue, Scarborough enclave, including a member of the OBHS staff/volunteer cadre,” said the OBHS in a press release.

The OBHS said it was created “to provide that missing piece in our society that most impacts the African-Canadian community – the missing expression and understanding of our past contributions with their connecting current heritage and accomplishments.”

It said that in addition to the OBHS Leaders of Tomorrow program, OBHS school presentations (recently reduced by budget cuts), as well as talks in youth detention centres, jails and ‘high-risk communities’, the need continues because the size and nature of the African-Canadian community has shifted and grown as have the current socio-economic challenges.

Rosemary Sadlier, president, says the OBHS stands ready to join the discussion with other stakeholders and government officials to determine a workable plan of action to address this unfortunate trend.

The Black Business and Professional Association also expressed alarm at the killing of Charles and Yasay as well as Clayton Wright, 42, and Daniel Davis, 27, who were gunned down in different parts of the city days after.

“We can only imagine the grief and sadness that this situation has brought to our community, not only to those who are the innocent victims but as well as to the relatives and friends of those who committed the crime,” said the BBPA.

The BBPA further said, “It is quite unfortunate that we often wait for a crisis to strike before we implement sustainable and community solution-based measures and programs to prevent this situation in the first place.”

Pauline Christian, president, said the BBPA is prepared to be a contributor in the dialogue and strategic planning with other community organizations, decision makers and stakeholders to address the spate of violence in our city. “Violence experienced anywhere affects people everywhere,” she said.