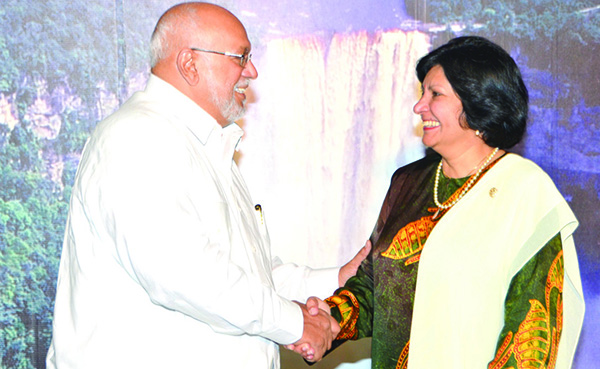 GEORGETOWN, Guyana CMC – The relationship between the Governments of Guyana and Malaysia was further strengthened when the new Malaysian High Commissioner to Guyana, Dato Sudha Devi Vasudevan, presented her letters of credence to President Donald Ramotar on Friday.

With priorities focused on diversifying collaboration in areas such as tourism, Information Communication Technology (ICT), education and construction, the existing relationship between Guyana and Malaysia has been characterised by shared common positions on political, economic and social issues at various international forums .

Bilaterally, Guyana has opened the door to Malaysian investors, and while the level of trade relations between the two has been relatively low, the Malaysian Government believes that the prospects for expansion are positive.

President Ramotar told the Malaysian High Commissioner that he is willing to explore cooperation in various areas given the opportunity which South/South cooperation provides.

He said Malaysia’s commitment to intensify the two countries’ relations through the Malaysian Technical Cooperation Programme, and the conclusion of trade and economic agreements which would provide the opportunity for the private sector of the two countries to explore means through which they can make a contribution to economic development.

“I am convinced that Guyana and Malaysia can actively explore several areas of cooperation. It is therefore my sincere hope that during the time you will serve as High Commissioner that our relations would be significantly enhanced,” Ramotar said.