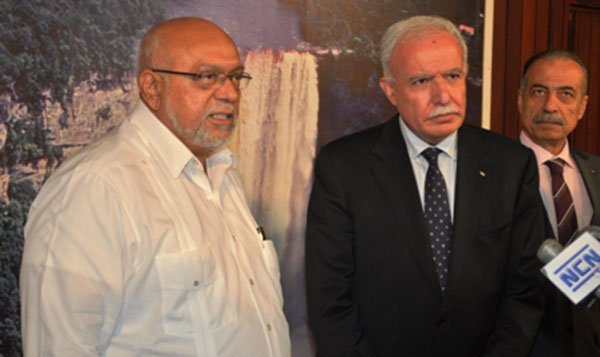 GEORGETOWN, Guyana, CMC – Guyana has reiterated the need for a peaceful settlement of the Israeli-Palestinian conflict as a prerequisite for lasting peace on the Middle East.

“The Palestinian people deserve the same rights as people everywhere: to live in dignity, security, freedom and independence, at peace with all their neighbours, and with the right to move freely within their homeland,” President Donald Ramotar said as he met with the Minister of Foreign Affairs in the Middle Eastern country,  Riad Al Malki.

Palestine’s bid for Non-Member State Observer Status in the United Nations was backed by the Guyana and approved in a historic UN session last November when 138 countries voted in favour of the resolution.

“My main purpose of this visit is to extend our thanks and appreciation as Palestine, the Palestinian State, the leadership and the Palestinian people to Guyana, the President the people and the Government for their strong committed position in support of justice around the world, but also justice in Palestine,” Al Malki said.

A government statement issued after the talks said that “the development of relations between Guyana and Palestine featured prominently during the Foreign Minister’s discourse with President Ramotar with hopes of those relations materialising in the near future”.

The government statement said that Guyana’s Ambassador to Kuwait will also be appointed while a Palestinian Ambassador within the Caribbean and Latin American region will be assigned to Guyana.

Guyana became the first Caribbean Community (CARICOM) member state to establish diplomatic relations with the Palestinian National Authority and is a party to the UN Committee on the Exercise of the Inalienable Rights of the Palestinian People.

It gave recognition to the State of Palestine based on its 1967 borders and supports the nation’s aspirations to full membership of the United Nations.