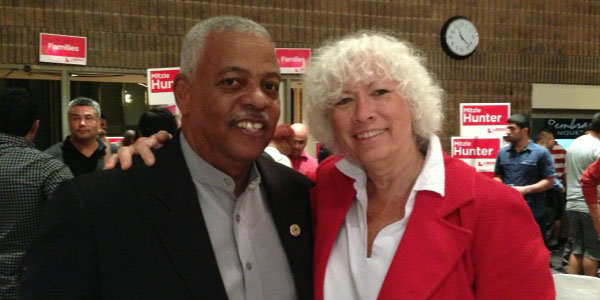 Diana Burke, a Jamaican Canadian and information security technology expert, has ramped up her campaign to become the candidate for the Liberal Party of Canada in the federal riding of Toronto-Centre.

On September 15, the three candidates – Burke, Chrystia Freeland, a journalist and author and Todd Ross, a community organizer – seeking to represent the Liberal Party will make presentations at a nomination meeting to be held at the Toronto Reference Library.

Burke recently held a meet-and-greet event at the Vic Public House, a restaurant in the gay village on September 3. A couple days later she held a similar event in the northern part of the riding at the Quail and Firkin, a restaurant on Yonge Street.

“Many of you have asked how you can help between now and the 15th. The
campaign will require many resources and your continued help and
support is greatly appreciated,” said Burke in an email to her campaign supporters.

The riding is large and includes communities such as Rosedale (one of Canada’s wealthiest enclaves), Regent Park (Canada’s first and largest social housing development), St. Jamestown (a largely immigrant area and the most densely populated neighbourhood in Canada), Cabbagetown, Church and Wellesley (Canada’s largest gay community), the eastern portion of the University of Toronto, and part of the city’s financial district (the northern portion of Bay Street).

A by-election is expected in the fall and follows the resignation of Bob Rae, former Member of Parliament for the area and former interim Leader of the Liberal Party of Canada, in July.

The candidates for the federal NDP are Jennifer Hoilett, a broadcast journalist, and well-known author and journalist, Linda McQuaig. Travis McCrea, leader of the Pirate Party of Canada, is also seeking to represent the riding. The Conservatives have not yet named their candidate to run in the riding.

Burke immigrated to Canada from Jamaica over 40 years ago and was hired by the Royal Bank of Canada straight out of high school.

Burke said she was able to increase her education, through lots of hard work, and took some risks and opportunities to excel and become a senior executive of RBC with some global responsibilities.

She was able to sponsor some of her family and her parents to come to Canada.

She has lived in Toronto-Centre for over twenty-five years and has done a lot of community work in the riding.

“I think its time for me to give back to Canada and to give back to this community. And, I believe I have the expertise and the business and technology knowledge that would be very beneficial in government,” she said.

Burke is the second Jamaican to seek representation of this riding. In 2008, Don Meredith, now senator, sought the candidacy of the Progressive Conservatives for the area but lost to Rae, the Liberal Party candidate.

She follows in the footsteps of Jamaicans, Rosemary Brown and Lincoln Alexander. Brown became the first Black woman to run for the leadership of a Canadian federal party, the New Democratic Party, in 1975. In 1968, Alexander won the riding of Hamilton West for the Progressive Conservative Party of Canada becoming Canada’s first Black Member of Parliament.

Burke noted that the riding is very diverse with many cultures and ethnicities, and has the largest gay community in Canada, which is exemplary to the world to demonstrate that Pride means being able to be who you are.

The technology expert says she can relate to the issues that new immigrants are facing: social issues and the challenges to relocate to Canada and have their credentials recognized.

She thinks that the open, fair and welcoming Canada that she came to is under siege by the Harper government, noting that with the policies today she would not have been able to come to this country with a high school education or sponsor her parents.

A visionary technology pioneer, as a senior executive of Royal Bank Financial Group worldwide, she foresaw the advent of a cashless society and played a leadership role in building the complex, fast and secure networks that have become commonplace.

In a world increasingly operating through cyber-networks and threatened by cyber-terrorism, these knowledge and skill sets have become invaluable.

Burke is a hard-working and charismatic person whose ability to attract and manage large numbers of volunteers and employees is well established—both in business and in community endeavours. Traits, which she said, transfer well to electoral politics.

Her many community and charitable commitments are diverse. One of her favourite projects has resulted in early childhood computer learning through “Tech‘ de Bus,” a school bus equipped with computers, an electrical generator and a satellite dish which moves among the remote mountain villages of Jamaica. She has served as the president of the Project for the Advancement of Childhood Education (P.A.C.E Canada), an organization that adopts early childhood institutions in Jamaica and Canada.

She was also on the organizing committee for the celebration of 50th anniversary of Jamaica’s Independence in Toronto last year. She said that part of what was done with the celebrations was to raise the profile and highlight the contributions that many Jamaicans make to this community and to Canada.

In 2007, she was part of the Festival Management Committee to reinvigorate Caribana, the Caribbean summer festival in Toronto.

She was the president of the International Women’s Forum – Toronto Chapter, a global organization of outstanding women leaders.

Burke said when she was at RBC, she was one of few women in the very male-dominated technology department but that did not deter her from working hard to be successful and being a role model for other women in technology.

She wants to encourage more women to take up the challenge of becoming representatives in government and to bring back respect to the role of politicians.

Burke understands the nature and scale of the challenge of electoral politics and is ready and willing to undertake whatever is required to succeed.