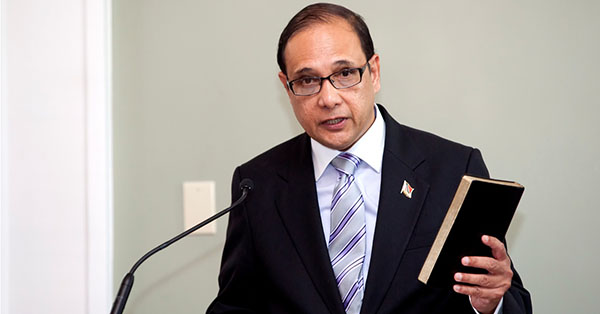 PORT OF SPAIN, Trinidad CMC – On Monday, Finance Minister Larry Howai presented a TT$61.3 billion (One TT dollar = US$0.16 cents) budget to Parliament, outlining new tax measures and a host of incentives to further spur an economy that he said, is expected to grow by 1.6 per cent this year.

During a two-hour presentation, Howai, presenting the fourth fiscal package of the coalition People’s Partnership government since it came to office in 2010, said illustratively, the gross domestic product (GDP) will expand by 2.5 per cent in 2014.

Howai said unlike the past when the oil rich twin island republic depended heavily on its energy sector to spur economic growth “the non-energy GDP has been expanding at a moderate pace for sometime”.

He told legislators that the government’s expenditure is calibrated on the basis of revenue projections which are predicated on oil and gas price assumptions of US$80.00 per barrel and US$2.75 per mmBtu respectively.

“We have also made provision in the estimates for clearing a number of long outstanding balances,” he said, noting that the Kamla Persad Bissessar administration is projecting that total revenue will be TT$55.04 billion, with oil revenue accounting for TT$23.37 billion and non-oil sector bringing in an estimated TT$32.66 billion.

In addition, Howai, a former banker, said that the total expenditure net of capital repayments and sinking fund contributions have been pegged at TT$61.3 billion.

He said the government is projecting that in the next fiscal year, a deficit of TT$6.3 billion or 3.6 per cent of GDP, down from the 4.6 per cent in the fiscal year 2013 budget.

“I have ensured that our expenditure profile not only reflects fiscal prudence but also maintains the public socio-economic agenda of this administration. In addition, to promote increased employment and investment, I have increased our capital programme by over TT$500 million in this fiscal year, bringing the total amount to TT$8 billion or 4.5 per cent of GDP, the largest in our nation’s history.”

Outlining his tax proposals, Howai said that in order to encourage small and medium-sized enterprises to raise capital through the Trinidad and Tobago Stock Exchange, he would from October 1 this year amend the Corporation Tax Act by redefining the qualifying capital base for these incentives by excluding retained earnings and reserves and, in terms of the new issued capital raised, the 30 per cent to be owned by 25 unrelated shareholders will be 30 per cent of the new capital issued.

He said the government also intends establishing a Motor Vehicle Accident Fund from January 1 next year, using the funds from the six per cent tax on insurance premiums.

He said the government would introduce a number of new incentives from January 1 next year aimed at stimulating further exploration and development-related investments in the energy sector.

“The credit is only available for use in the financial year in which the expense is incurred and any unused tax credits cannot be carried forward or backward for offset from the tax liabilities of any other financial year.
“To ensure continuity of these activities and increase new investments, I propose that the unused tax credits be allowed to be carried forward for one year,” he added.

Howai said that capital allowances that provide a mechanism that de-risks and allows for earlier recovery of investments would be simplified for those operating in the upstream energy sector.

He said with regards to the promotion of alternative fuels, the government intends to replace the existing incentives of tax credit of 25 per cent and wear and tear allowance for fleet operators with a simple tax allowance of 100 per cent percent on the cost of converting motor vehicles of either individuals or companies to use CNG up to a maximum expenditure of TT$40,000 per vehicle.

He said he also intends to waive the existing 20 per cent custom duties payable on compact fluorescent lamps as the government moves to improve energy efficiency.

He said in a bid to discourage the illegal export of subsidized fuel , anyone convicted under the indictable offences under the Customs Act and the Excise (General Provisions) Act will now have to pay fines up to TT$500,000. In addition to the goods being forfeited, the vessel involved shall also be forfeited.

“ I propose also to amend Section 6 of the Petroleum Act to provide an increase in the fines for the illegal export of subsidized fuel from $30,000 and $1,500 per day for a continuing offence to $500,000 and $50,000 per day,” he said noting that the measure goes into effect from January next year.

The government is also clamping down on illegal quarrying by increasing the fines in some cases from TT$300,000 to TT$700,000 and that anyone who purchases any mineral from an illegal operator, the fine on summary conviction will be increased from TT$100,000 to TT$500,000;
He said in cases where someone breaches the Act or the Regulations and where no punishment is specified, the fine will be increased from TT$50,000 to TT$200,000.

The government is also increasing the customs duty with respect to the importation of new and foreign used cars over 2,499 cc.

“ I propose to increase customs duty by 25 per cent with effect from October 1 2013 on new and foreign used cars over 2,499 cc excluding T-vehicles and vehicles registered for use as maxi-taxis,” he said, adding that fines would also be imposed to protect the environment.

The government also intends to increase the license fee in respect of betting levy board operations from TT$100,000 to TT$200,000 payable by all betting offices which negotiate bets at fixed odds from January 1 next year.

The biggest slice of the budget has gone to Education and Training (TT$$9.820 billion) followed by the Ministry of National Security (TT$6.497 billion).

Howai said that the budget underscores the coalition government’s efforts to keep “our economy shielded from the hurricane-like winds emanating from the 2008-2009 global financial crisis.

“We have taken bold action. We are moving towards a return to balanced budgets; while keeping our debt burden within sustainable levels. We have put jobs at the core of our agenda and we have protected the vulnerable. We have rolled-out productivity-enhancing infrastructure to catalyze growth and development,” said Howai.