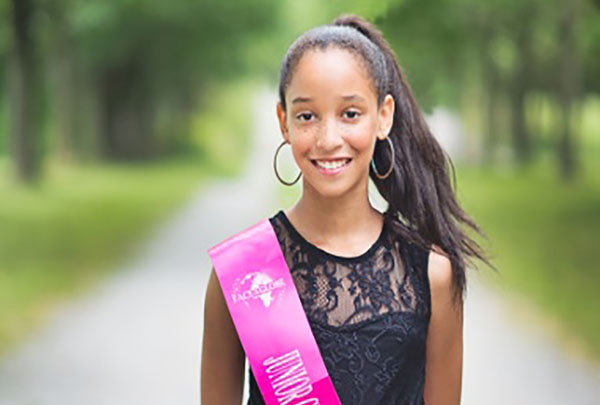 Ajax, ON – Ajax resident, Simone Shanks, has been selected by the Face of the Globe organization to represent Canada in their annual beauty pageant being held in London, England and Disneyland Paris this Fall.

Twelve-year-old Simone will compete with girls from around the world for the title of Miss Junior Face of the Globe International 2013. The pageant will be held October 20, 2013 to October 27, 2013 with the first stage of the competition taking place in London, England and the Grand Finals being held in Euro-Disney in Paris, France. Finalists will be judged not just on looks, but also their personalities, and awards such as Miss Talent, Miss Publicity and Miss Charity.

Simone is no stranger to competing and being in the limelight. She is a two-time triathlon participant and competitive cheerleader with Dynasty Cheer Academy in Scarborough. She has won awards for her dance routines, cheerleading and most recently appearing in a music video for Radio Personality and Singer Meredith Shaw. Simone is most looking forward to meeting contestants her age from all over the world, and sees the trip to Paris as the perfect opportunity to use her French language since she has been in the French Immersion school system (attending Cadarackque Public School) since she was in Grade one.

Simone believes that bringing home the title of Miss Junior Face of the Globe International 2013 will be a great honour and would allow her to use her increased visibility and influence to work with charitable organizations to make a difference in the lives of kids who are less fortunate.

Simone credits her accomplishments to having been blessed with a supportive family who encourages her to pursue her dreams and achieve her goals. Her mother, Trinidadian born Hazel Shanks is her number one supporter and will be her travel companion to the United Kingdom and France for the competition. Hazel and her husband, Gord Shanks, are proud of Simone’s accomplishments for her young age. “This whole experience is surreal”, said Hazel Shanks, “my husband and I are proud parents indeed and we’re truly grateful for the outpouring of support from family, friends and well-wishers.”

Simone is a very outgoing, friendly, confident girl who has a passion for life and new adventures. “I’m really excited about my trip and honored to be representing Canada in this competition,” said Simone Shanks, “I will do my best to make my country proud.”

You can show your support for Simone by visiting her online fundraising page at www.gofundme.com/simoneshanks where you can make a donation or contact Hazel or Gord Shanks at 416-560-4725 for more information.