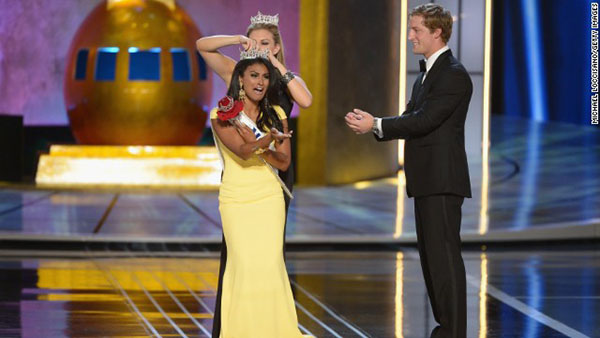 According to CNN, Nina Davuluri is the second consecutive New York beauty queen to take the Miss America title, but she’s the first Indian-American to wear the national crown.

Davuluri’s platform was “Celebrating Diversity Through Cultural Competency.” For the talent portion of the competition, she performed classic Indian dances fused with Bollywood moves.

She has studied the Kuchipudi and Bharatanatyam styles of dance, and in preparation for the Miss America contest, she worked with famed Bollywood choreographer, Nakul Dev Mahajan.

Although this was a time of joy for the Miss America winner, within minutes of winning the title, Davuluri was the target of racist social media comments.

“If you’re #Miss America you should have to be American,” said one on Twitter.

“WHEN WILL A WHITE WOMAN WIN #MISSAMERICA? Ever??!!” asked another.

Davuluri, however, brushed aside the negative comments. “I have to rise above that,” she said. “I always viewed myself as first and foremost American.”

The 24-year-old Fayetteville, New York, native was on the dean’s list and earned the Michigan Merit Award and National Honor Society nods while studying at the University of Michigan, where she graduated with a degree in brain behavior and cognitive science.

Her father, who emigrated from India 30 years ago, is a gynecologist, and Davuluri said she’d like to become a physician one day as well.

“During her year as Miss America she will serve as spokesperson for STEM (science, technology, engineering and mathematics) this year as she travels to Washington, D.C., to work with the Department of Education,” according to a Miss America statement.