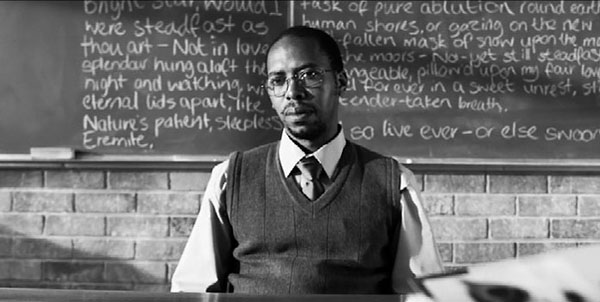 South Africa now has a burgeoning film industry, programmer, Rasha Salti, told the audience before the screening of the film “Of Good Report” at the Toronto International Film Festival last week. But it has a strict code of content. “Of Good Report,” the second feature film by director Jahmil Qubeka, presents a jarring challenge to that code. It as an homage to film noir and an exploration of evil that is definitely not for all tastes.

Parker Sithole (Mothusi Magano) is hired as a high-school teacher in an impoverished rural township. Before his first day at work, he has a romantic encounter with a girl he meets in a bar, only to discover the next morning that the girl, Nolitha (Petronella Tshuma), is one of his students. Sithole doesn’t end the affair; he pursues it, with tragic results.

Shot in black and white, the film provides a stark glimpse of life in rural South Africa. And through Qubeka’s lens, it is not a pretty sight. These characters, despite efforts to maintain their dignity, live in a bleak world of dust and austerity. It is this desolate realm that serves as a backdrop to Qubeka’s disturbing tale.

There is no doubt that Qubeka is a skilled storyteller as he moves the story in and out of flashbacks without confusing the viewer.

In Qubeka’s hands, seemingly unrelated details weave themselves into the story revealing their significance much later. Some elements, such as a leaky roof, a barking dog and a severely injured man stumbling through the desert, are not fully understood until the dark full-circle ending.

It is not surprising that this film was banned (it was subsequently unbanned) by South Africa’s socially conservative authorities. Apart from the sexual taboo of the main storyline, many scenes are difficult to watch, even for seasoned veterans of cinema’s more macabre films. And yet, as is often the case in the films of Alfred Hitchcock, much of the real horror in “Of Good Report” takes place off camera. It is because we know what is going on that we want to look away.

And that is why “Of Good Report” is difficult to watch but, in many ways, commendable. That is the paradox of a flawed work by a young director of obvious talent.