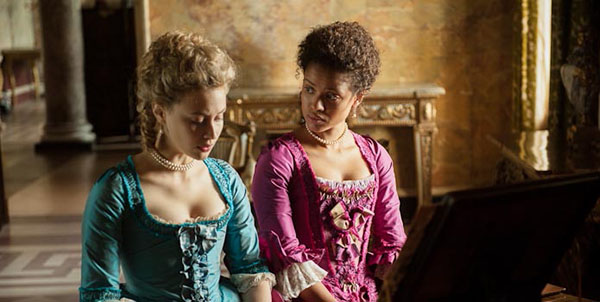 When Belle’s mother dies, her father, who has to return to sea, takes the little girl to England to be raised by his aristocratic family, as custom of the time dictates. The admiral’s uncle, Lord Mansfield (Tom Wilkinson), is the lord chief justice of England and Wales, and the patriarch of the family. Lord Mansfield is also raising another niece, Elizabeth (Sarah Gadon), whose mother has died and father has remarried. Elizabeth is about the same age as Dido and the two girls grow up together raised as ladies, both stylishly dressed in the fashion of the day, their hair similarly coiffed.

Dido is treated kindly and as one of the family but she is also an embarrassment because she is biracial. So, when company comes to dinner, Dido is not allowed to dine with the family and can join the company only after dinner. All this makes her ask: “How may I be too high in rank to dine with the servants but too low to dine with my own family?”

Such are the social rules that must be followed in late 18th-century England, when slavery has not yet been abolished.

The dilemma intensifies when the girls are young women. Elizabeth, with no stigma or racial barriers, is as free as anyone to choose a husband. But how is Dido to marry?

This romantic period piece is on par with any of the recent adaptations of Jane Austen novels, but is remarkable because it is a true story that portrays an aspect of social history rarely explored.

Amma Asante, who wrote and directed “Belle,” began her career as an actor. She has written for television and made her directorial debut with the film, “A Way of Life” (2004).