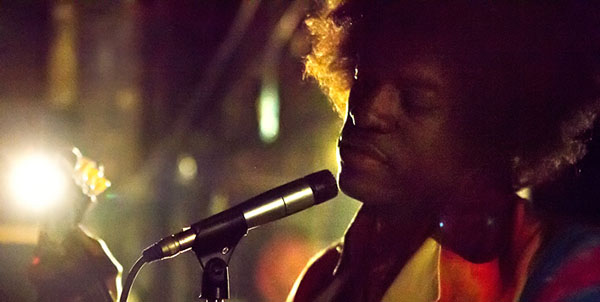 “All Is By My Side,” which premiered at the Toronto International Film Festival (TIFF) earlier this month, focuses on a year in the life of Jimi Hendrix just before he became a rock guitar icon. The film, directed by John Ridley (who also wrote the screenplay of the film “12 Years a Slave”), centres on Hendrix during the year he spent in London as he stood on the cusp of international fame, and the two women in his life who helped to shape his career.

Hendrix (played by André Benjamin, a.k.a. hip-hop artist André 3,000) is Curtis Knight and the Squires’ guitarist when Linda Keith (played by Imogen Poots), the girlfriend of Rolling Stones guitarist Keith Richards, sees Hendrix performing in New York. She is so impressed by the unknown guitarist’s talent that she recommends him to the Stones’ manager, who comes out to see Hendrix play but remains unimpressed. Keith, however, doesn’t give up. She gives Hendrix one of Richards’ guitars as a gift, and introduces him to Chas Chandler, former bassist of the Animals. Chandler, who shares Keith’s enthusiasm, becomes Hendrix’s manager. Chandler persuades Hendrix to move to London to pursue a recording career.

Hendrix embraces life in London, where he assembles a band with the help of Chandler. He meets the other woman in his life during this time: Kathy Etchingham (played by Hayley Atwell), a groupie who eventually becomes Hendrix’s girlfriend.

Ridley has said that Benjamin spent six months preparing for the role, and it shows. He delivers an understated yet moving performance as the enigmatic guitar hero. Benjamin’s facial resemblance to Hendrix is uncanny, and he manages to play the often sullen artist convincingly. Benjamin’s other film credits include “Idlewild,” “Smokin’ Aces” and “The Great Gatsby.”

One notable characteristic of this film is the absence of actual Hendrix music. That is because the filmmakers reportedly failed to obtain licensing from the Hendrix estate, which would agree to license the music only if it had a say in the production. The film gets around this omission by showing Hendrix playing blues jams and covers, and most scenes and performances take place before he made any significant recordings. But this film is not a greatest-hits music video; it is a character study and, thanks to a fine script and some excellent acting, it succeeds.