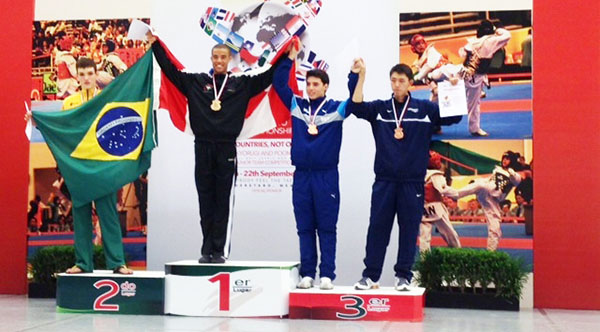 Adam Tomlinson has achieved a gold medal win for Canada at the September 20-22, 2013 Jr. Pan Am Games in Queretaro, Mexico. He competed in the Light Heavy Weight Jr. A Sparring Division.  The intensiveness of his training at A.T. Martial Arts following his Canadian Championship in January this year paid off. Due to the high altitude in Queretaro, Mexico he needed to focus his training on preparing for the thinner mountain air.

This competition was the biggest delegation Taekwondo Canada had ever sent to an event. The team cheers and loud chants and stomping from the different countries were so supportive and spirited it was like being at a world soccer match.

This was a huge accomplishment for Adam as he competed against the best opponents from Argentina, USA and Brazil.  He dominated and controlled the fights consistently beating Argentina 13 to 5, USA 22 to 9, and a nail biting match with Brazil 15 to 14.  He overcame his opponents using his speed and power even when they tried to bend the rules to their advantage.

Adam has been training to prepare himself for this type of adversity at A.T. Martial Arts in Whitby, Ontario for the past 13 years consistently. His coach and father Master Anthony Tomlinson has helped to prepare him mentally and physically for these high level tournaments. Adam has achieved this by maintaining courtesy, integrity perseverance, self control and indomitable spirit which are the tenets of taekwondo.

Adam will continue to strive for higher goals at the 2015 Pan Am games in Ontario, Canada and ultimately the 2016 Olympic Games in Brazil. He plans to study law in University after graduating high school this year.