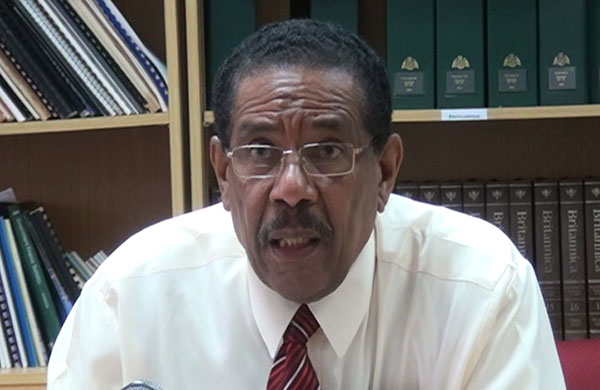 ROSEAU, Dominica CMC – President-elect Charles Savarin has defended his election even as Opposition Leader Hector John said he would snub the head of state and boycott all functions officiated by him.

Savarin, 70, who is expected to be sworn in to office later this week, was elected by the Dominica parliament by a 19-0 margin after opposition legislators boycotted the event on Monday.

But the former trade unionist, teacher and diplomat, told the Caribbean Media Corporation (CMC) that his election, contrary to the arguments put forward by the opposition was in keeping with the provisions outlined in the Dominica Constitution.

He regarded his election to the largely ceremonial post as a continuation of his public service.

“Anybody who is called upon to serve in the Office of President must consider it an honour conferred upon him. I have always been a public servant. My entire working life has been one of public service and therefore being asked to consider to serve as President of Dominica is merely an continuation of a life of public service,” Savarin told CMC.

Savarin, who resigned as national security minister last week in order to be elected to the post, was the Roosevelt Skerrit’s third nominee for the post to replace President Eluid Williams, who was elected last year to complete the term of office of then President Nicholas Liverpool, who resigned because of ill-health.

Savarin, who received the country’s highest award – the Dominica Award of Honor – told CMC that the Constitution allows for the head of state to be elected from among elected members of parliament.

“So that the framers of the constitution anticipated such a provision and made the provisions in the Constitution. I do not see that in any way preventing the proper discharge of the function of a president.

“The fact of the matter is that the Constitution provides specific responsibilities on the President including consulting with the Leader of the Opposition in the discharge of certain functions.

Savarin dismissed suggestion that through his election, he had politicised the position of head of state, telling CMC “I can’t see how you could talk about politicising the role when the Constitution makes provision for … a sitting Member of Parliament who becomes president… all it provides is if the sitting member of elected she shall resign his seat.”

He said the President must always function within the limitations and confines of the Constitution.

“We are a constitutional democracy, the executive power is in the Cabinet. The President has a role to play, but the decision making in terms of economics, social and other functions are effectively that of the prime minister and the cabinet..

“The President does not come with a manifesto and he does not present, for instance, a budget speech and, if in fact,   he makes a speech   which indicated what he wished to see (then) that must be consistent with the government‘s own vision as to what they want to achieve,” the veteran politician added.

“You will certainly not see me or hear me on a political platform of any colour,” he said.

Meanwhile, John, speaking at a UWP rally here, said, he would not recognise Savarin as the head of state. He described Savarin as “Skerrit’s president”.

He told supporters that the Savarin’s election was not within the bounds of the Constitution.

“The President of Dominica should be somebody bringing the country together, somebody respecting the Constitution, somebody of high integrity, some body of love, compassion and good character.”