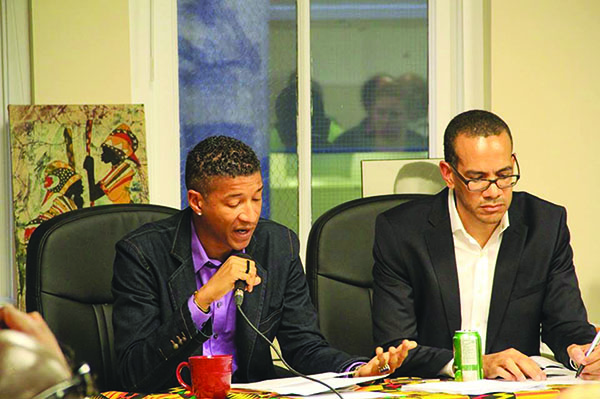 The Black Coalition for AIDS Prevention (Black CAP) says Black, African and Caribbean people account for almost one-third of all new HIV infections in Ontario while in the early 90s they made up only one-tenth of all new infections.

With the mantra, “Because All Black People’s Lives are Important,” Black CAP said its goals “to reduce new HIV infections and provide care and support to Black people living with HIV are driven by the importance of Black bodies, Black health and Black strength.”

It said not everyone in society shares this vision and as a result it is working harder than ever to reduce the impact of HIV in the community.

Despite challenges of funding and the impact of changes to Canada’s immigration policy and a Supreme Court decision, the Black Coalition for AIDS Prevention (Black CAP) says it is doing more than it as ever done to reduce the impact of HIV in the community.

Founded in 1989, the organization seeks to reduce the spread of HIV infection within Toronto’s black communities and to enhance the quality of life of people living with or affected by HIV/AIDS.

Speaking at Black CAP’s annual general meeting on September 25 in Toronto, Shannon Thomas Ryan, executive director, and Akim Ade Larcher, board chair, said the organization continues to operate in a challenging funding environment as governments look to reduce budgets and question their commitment to non-profit organizations.

In 2012, there was a significant reduction in funding from Citizenship and Immigration Canada resulting in the elimination of a half-time position focused on providing settlement supports to LGBT newcomers from Africa and the Caribbean.

However Black CAP was able to secure a new funding commitment from the government of Ontario and the Newcomer Settlement Program.

The City of Toronto has maintained, and in some instances increased it’s funding, of the organization despite its funding reductions in other city-funded programs.

“As we plan our work for the coming year we also note the significant challenges that our clients and community will deal with. The most pressing of these challenges are the recent changes to immigration policy and a new Supreme Court ruling on the criminalization of HIV non-disclosure,” the report stated.

“Our  clients  have  especially  complex  refugee  claims  and  within  the  new  timeframes  for  claims  it  is  especially  challenging  for  our  clients  to  gather  the  information they  need  to  mount  a  successful  claim,” he said.

The organization has launched a new refugee settlement program specifically aimed at people living with HIV/AIDS (PHA) and LGBT refugee claimants. The program aims to address the immigration policy changes and is meant to support clients to make successful refugee claims.

Changes to Canada’s asylum system came into effect on December 15, 2012.

“Under the Balanced Refugee Reform Act and the Protecting Canada’s Immigration System Act, all eligible asylum claimants will still get a fair oral hearing before the independent Immigration and Refugee Board of Canada,” the website of CIC states.

The executive director said the changes to the law related to the criminalization of HIV non-disclosure are also especially troubling.

“Given that a significant number of charges in these cases are made against Black men it is highly likely that we will see more arrests made. The new law also creates a real challenge for women who often cannot decide if their partner wears a condom or not,” Ryan said.

On October 5, 2012, the Supreme Court of Canada decided that people living with HIV have a legal duty, under the criminal law, to disclose their HIV-positive status to sexual partners before having sex that poses a “realistic possibility” of HIV transmission. Not disclosing in such circumstances means a person could be convicted of aggravated sexual assault.

The Canadian HIV/AIDS Legal Network said there is no guaranteed way to avoid being accused of HIV non-disclosure. “People may lie or make mistakes about whether disclosure took place and/or whether a condom was used. But there are things you can do that may reduce the risk of criminal prosecutions or conviction for HIV non-disclosure,” it said.

It recommends telling sexual partners that you are HIV-positive before sex, and try to get proof that you told them about your status (e.g., disclose your status in front of a witness before having sex, such as a counsellor or doctor, who can document that disclosure took place, or sign a joint document).

To increase its visibility, Black CAP’s harm reduction team has worked in several neighbourhoods, including downtown west, Rexdale and southern Scarborough. This also included the expanded work of the prevention team in prisons, in collaboration with PASAN.

PASAN is a community-based network of prisoners, ex-prisoners, organizations, activists and individuals working together to provide advocacy, education, and support to prisoners and ex-prisoners in Ontario on HIV/AIDS, hepatitis c virus (HCV) and other harm reduction issues. Black CAP had increased its work in prisons outside of Toronto over the last year.

On a different but related matter, the CHIR Social Research Centre in HIV Prevention and the African and Caribbean Council on HIV/AIDS in Ontario (ACCHO) presented a public lecture on September 26 in Toronto entitled, “Managing Risk and Dealing with Diversity: The needs and experiences of Black African people in HIV sero-discordant relationships,” by Dr. Adam Bourne. Dr. Bourne is a Research Fellow with the Sigma Research group at the London School of Hygiene and Tropical Medicine in the UK.

In a project funded by the African Health Policy Network, researchers interviewed 60 Black African people from across England who had current or recent experience in a sero-discordant relationship. The sample included 44 people with diagnosed HIV and 16 whose most recent HIV test result was negative.