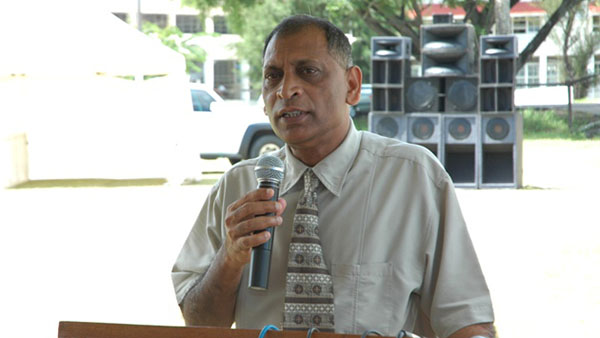 The MDGs are the world’s time-bound and quantified targets for addressing extreme poverty while promoting gender equality, education, and environmental sustainability by 2015. Goal number 8 speaks of developing a global partnership for development.

Ramsammy, speaking at the Joint Technical Opening of Caribbean Week of Agriculture (CWA) on Sunday, said that two Caribbean Community (CARICOM) countries — Guyana and St. Vincent and the Grenadines — have been recognized by the Food and Agricultural Organization for attaining Goal 1: halving both the number and percentage of undernourished residents

He said there was also much talk about Goals 4, 5, and 6 aimed at reducing child mortality; improving maternal health; and combating HIV/AIDS, malaria and other diseases.

“There is one MDG that we don’t talk about much,” Ramsammy said, adding that a survey of people attending the CWA activity might find that more than 70 per cent of them don’t know the purpose of Goal 8.

“I don’t mean to say that in any negative way, but it is the truth. The truth is that MDG 8 is not talked about.

“MDG 8 is a failure of the developed countries. They didn’t keep their obligation. MDG 8 was to make sure that technology and innovation are shared in an equitable manner around the world. But the truth is that we don’t have access to the technology that could transfer our technology around the world,” Ramsammy said.

“MDG 8 has been a colossal failure and we must stand up and speak. I will continue to speak up for MDG 8. We must be ambassadors for our country and advocates, and speak up. That’s what CWA is about — passionately speaking about it.

“We must passionately speak about climate-smart agriculture, we must be diligent in placing all these issues … at the very, very heart of any people-centred developmental agenda,” Ramsammy further told participants of CWA, the region’s premier agriculture event.

CWA is being held under the theme “Linking the Caribbean for Regional Food and Nutrition Security and Rural Development” and ends on Saturday.

Meanwhile, the Project Development Specialist with the Belize-based Caribbean Community Climate Change Centre (CCCC), Keith Nichols, said mountainous countries in the region must pay attention to how farming practices contribute to landslides and other forms of soil loss during extreme weather events.

“Hurricane Tomas in 2010 was maybe one of the best experiences of how not to do things,” Nichols told the Caribbean Media Corporation (CMC) following his presentation on climate change and its impact on Caribbean agriculture at the CWA.

He said that to a large extent, the factors that contribute to soil loss during extreme weather events — such as storm and torrential rains — cannot be controlled.

“But in some cases, condition are exacerbated by our own practices,” Nichols said, noting that cultivation on steep hillsides can reduce the capacity of plants to hold the soil in place.

“So, it is a case where we do manage our lands improperly. We contribute to the kind of disasters that we see, the kind of slope failure and so on,” he said, noting much can be done to reduce the impact of extreme weather.

“A lot relates to how we use our slope lands in our respective countries.”

Nichols used the example of bananas — a major crop in St. Vincent and the Grenadines, Dominica and St. Lucia — and said the fruit should be grown on flat lands.

“We grow crops everywhere, including very, very steep hillside,” he said, adding that with any change from natural condition to one that is managed agriculture, systems must be put in place to manage slope failures.

Intercropping, he further said, is also an option.

“We don’t do it. We cut down the huge trees, we cut down everything in favour of bananas or pineapples or whatever it is and reduce the ability of the soil to remain in place,” he said.

“So, we will always end up with slope failures because of our conversion of the land from something that is stable, and just waiting for the proper event to cause it to slide down the slope.”

Michael Hailu, Director, Technical Centre for Agriculture and Rural Development (CTA) said Information and Communication Technologies (ICTs) could be the catalyst for changing the agricultural sector in the Caribbean.

Speaking on the topic “Strengthening ICTs in Agricultural Value Chains – Towards increased integration in ICTs for growth and productivity”, Hailu said the use of ICTs creates “huge opportunities for farming communities and young people”.

He encouraged innovation by calling on the region “to use innovative technologies to engage young people to agriculture and to address the challenges in the sector. This is an important element in strategy to safeguard the future of agriculture.

“It is important for the young people to get involved and develop solutions,” he said, recommitting the CTA to innovation in ICTs in the Caribbean.

He referred to developmental applications in the Caribbean for the scaling-up of ICTs capacity that will be shared with the African, Pacific and Caribbean (ACP) countries, adding “it is important to demonstrate and develop applications and share them with the ACP for the way toward a food secured nation.”