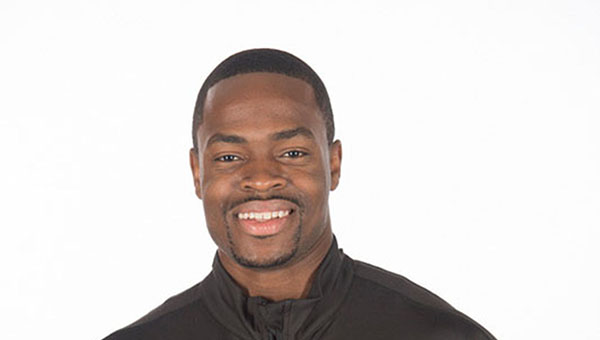 TORONTO, Ontario – Samyr Laine, a US-born triple jumper competing for Haiti, is looking forward to his third Pan Am Games when Ontario hosts the games in 2015.

Having competed at previous games held in Rio de Janeiro, Brazil and Guadalajara, Mexico, Laine says the international event here will be great, in light of the way in which the City of Toronto has galvanized around the T02015 movement.

Laine will be among the over six thousand athletes that will be in Toronto in July 10-26, 2015, to participate in the Pan American Games. The Parapan American Games will run from August 7-14.

Although born in Newburgh, New York, Laine studied in Boston, Texas, and Washington DC, where he now resides.

Both of his parents and many of his family are from Haiti and immigrated to the US in the 1970s, thus creating the opportunity for him to represent the Caribbean country at international events like the London Olympics and Pan Am Games.

“I made a decision to represent Haiti. A lot of that was just knowing the difference that I could make as an athlete for Haiti. In London, there were only five of us. I was the only Olympic finalist. In the Moscow World Championship, I was the only person there representing Haiti,” he said, noting that he has started a foundation to help Haitian youth with their sports experiences.

He likes doing similar work and public speaking to kids in the US but says the difference he can make in Haiti and the impact is a little more tangible.

The Jump for Haiti Foundation just finished its website, has its board of directors in place and is ready to launch some programs to give kids some training, development and exposure to sports.

Laine said while many Caribbean countries have a long history of sending children to the US to study and compete athletically, Haiti does not because the infrastructure, as far as youth sports is concerned, is not built up to the point where the country can do that.

Born on July 17, 1984, Laine is a member of the Pan American Sports Organization Athletes Commission – the only representative of an English-speaking or French-speaking Caribbean country – and was in Toronto from October 8-11 for the PASO General Assembly held at the Westin Harbour Castle Hotel.

He was elected by the rest of the athletes in Guadalajara, Mexico, to represent them at the general assembly and elsewhere.

“It’s good to know that an organization like PASO takes into account the thoughts of their athletes. We, as a commission, try to listen to the athletes and their needs, and of course most of us being athletes, we would like to think that we know what most of those needs are,” he said, while on a visit to the CIBC Pan Am/Parapan Am Athletes’ Village in the West Don Lands now under construction which will be home for 10,000 athletes, coaches and team officials.

He graduated from Harvard in 2006 where he studied government with a minor in French, and then went to graduate schools at the University of Texas at Austin for sport management and Georgetown University Law Centre where he graduated in 2010.

“I never like to end an experience unless I know I’ve gotten to the end as far as everything I could invest into it and everything I could get out of it,” he said about his choice to pursue triple jumping and not practice law yet. He thinks he is still growing in the sport and that there is more that he can accomplish.

At some point, he says, he will return to the legal/business side of things in terms of his career pursuits.

He started triple jumping about eleven years ago in his last year of high school and first represented Haiti at the Pan American Games in Rio de Janeiro, Brazil in 2007.

Since then he has represented Haiti at the 2011 Pan Am Games in Guadalajara, Mexico; five World Championships, the London Olympics where he advanced to the finals, and everything in between, including the CAC Games.

Laine was impressed with becoming a finalist in his first trip to the Olympics and has plans to score a medal at the Olympics in Rio de Janeiro, Brazil.

Meanwhile, Michael Fennell, an honorary member of the executive committee of the Pan American Sports Organization (PASO) and president of the Jamaica Olympic Association, says the Pan Am Games is extremely important to the Caribbean region.

“It’s the Olympics of the Americas. It is going to have even greater significance in Toronto because it is the first English-speaking for a very long time. Toronto has great significance to us in Jamaica and Toronto to the Pan American Games will be just like London was to the Olympic Games for us in Jamaica and the Caribbean as a whole,” he said.

Fennell said the Pan Am Games is a rehearsal for the Olympic Games in Rio, Brazil in 2016 and those who want to qualify or want to practice in a multi-sport environment will have no better place to go to prepare their skills for doing well on the world stage when it comes to Rio in 2016.

He said an added benefit would be the number of Jamaican nationals living here to cheer, witness and support the Jamaican athletes at the Pan Am Games in 2015.

Reporting on the technical coordination of the 2015 Pan Am/Parapan Am Games to the general assembly on October 10, Fennell said there is an advanced level of organization of that program.

He said the venues are well advanced in their preparation and that government support is interested in the legacy component for the community.

Through a multi-party agreement (MPA), the federal government has committed up to $500 million to support sport infrastructure projects, legacy initiatives, and essential federal services associated with staging the Games.

The provincial government has also provided $500 million, noting that the Games will be a key economic driver in the Greater Golden Horseshoe region over the next few years.

On the matter of transportation, Fennell noted as a matter of concern that there would be extensive travel distance from the main village to some of the sports venues.

Overall, Fennel said the technical coordination committee felt satisfied with the progress that has been made to date by TO205, the Toronto 2015 Pan Am/Parapan Am Games Organizing Committee.

Ian Troop, CEO of TO2015, said the economic legacy of the games will be 15,000 jobs; the sports infrastructure will be 10 new builds and 15 renovations; and the social legacy will be 20,000 volunteers who are considered the face of the game or the game-makers.

Troop said the venues are on or under budget and that construction started in 2012 and venues will be ready in 2014. He said they are designed to serve the communities in which they are situated in the decades after the games.

The $700 million athletes’ village is 55% complete in the West Don Lands community. It will be a sustainable, mixed-use neighbourhood that will provide 10,000 athletes, coaches and team officials with a safe and supportive environment during the Games.

After the Games, the community will include a new YMCA, the first ever residence of George Brown College, 808 units of market housing, up to 100 of which will be reserved for affordable housing; and 253 units of affordable rental housing, representing 24 percent of the total residential units being built in time for the Games.

The aquatics centre at the University of Toronto Scarborough will be finished in July 2014 and the Markham Centre will host the water polo, badminton and table tennis competitions.

The velodrome in Milton will be finished in September 2014; the soccer stadium in Hamilton will be completed on June 30, 2014; the athletics stadium at York University is under construction; and the Welland Flatwater Centre for canoeing and kayaking was completed in July 2013 and a recent sport event held there.

The Etobicoke Olympium will be renovated and used as a training site for aquatics disciplines including swimming, water polo, diving and synchronized swimming.

There will be an equestrian park in Caledon and a ballpark in Ajax.

The Pan Am Games will feature an estimated 6,000 athletes from 41 countries and territories competing in 36 sports, including women’s baseball and golf for the first time, in venues located in 15 municipalities in southern Ontario.

There will also be canoe/kayak – slalom, which will make its debut and men’s softball will return for the first time since 2003.

Among the 15 Parapan Am sports will be wheelchair rugby, which will be making its debut.

Together with the Parapan Games which has 1,600 para-athletes, they will be the largest international multi-sport Games ever held in Canada.

There will also be an arts and culture celebration showcasing the unique diversity found throughout the Greater Golden Horseshoe region.

Canada previously hosted the Pan Am Games in 1967 and 1999 in Winnipeg, Ontario.

At the last day of the general assembly, PASO delegates chose Lima, Peru as the host city of the 2019 Pan Am/Parapan Am Games. Other competing cities were: La Punta, Argentina; Santiago, Chile; and Ciudad Bolivar, Venezuela.