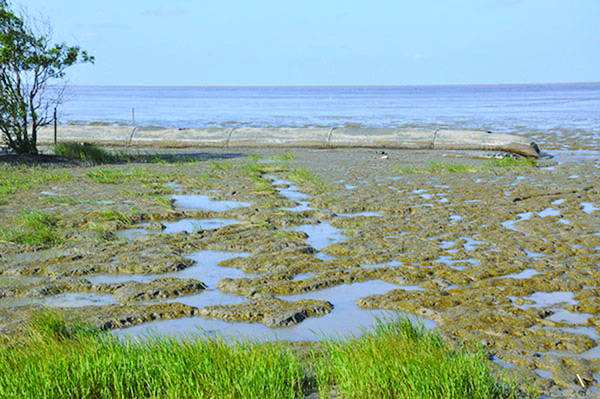 VICTORIA, Guyana (IPS) – Theola Fortune can recall how residents of Victoria would ridicule her and others every time they went into the east coast village to warn residents about the importance of mangroves and the need to protect them.

“They would accuse us of breeding mosquitoes in the community,” Fortune said. Yet scientists say that mangrove trees, which grow mainly in tropical and subtropical regions, can shield cities and towns from rising seas and storm surges by creating a natural barrier where the ocean meets the land.

Approximately 90 percent of Guyana’s population lives on a narrow coastline strip a half to one metre below sea level. That coastal belt is protected by seawall barriers that have existed since the Dutch occupation of the country. In recent times, however, severe storms have toppled these defences, resulting in significant flooding, a danger scientists predict may become more frequent.

After huge waves breached the seawalls on more than one occasion this year alone, Fortune said, “residents are finally beginning to realize that mangroves could help to protect their community” from destruction, in addition to saving lives.

Fortune, Avnel Wood and Kene Moseley are among the women who, as part of the Guyana Mangrove Restoration Project (GMRP), are combining commercial activity with spreading the word on the importance of protecting coastal mangroves.

“We sell tamarind balls, honey, coconut biscuits, sugar cane juice and other products,” Wood told IPS, adding that with the project, “many single mothers in the community are now able to provide for their families.”

Wood does not doubt what is causing the unusually high waves and frequent topping of the seawalls. “This is a product of climate change,” she told IPS. “There is nothing in that [coastal] area to break the energy of the waves because there are no mangroves at that part of the seawall.”

Scientists say that mangroves also play an important role in combating climate change because they store ten times more carbon than any other tree in Guyana’s forests.

In 2011 the GMRP, which is funded by a partnership between the European Union and government of Guyana, established the Mangrove Reserve Women’s Producers Group to promote alternative livelihoods in communities along the coast.

Guyana showed its commitment as well, she said, by making available 100 million Guyana dollars in 2010, a move which “in itself was a good demonstration that…we are not going to wait until the EU funds are released.”

Fortune told IPS that her mother is among a group of about 35 women who are now beekeepers, thanks to the project. They can sell honey from the bees for 100 Guyana dollars (50 U.S. cents) an ounce.

The beekeepers build their hives in the black mangrove forest, Wood said. “The mangroves have a lot of flowers, and so they get a lot of honey at a faster rate.”

The GMRP also provides climate change and mangrove education to local children and youth, while visitors from other parts of the country and from outside Guyana are taken on horse-drawn carts for educational tours.

In 2011, only 22,632 hectares of mangroves remained in Guyana. Since then, more than a half million mangrove seedlings have been planted throughout the country as efforts intensify to protect the Guyana shoreline from coastal degradation.

Still, more work needs to be done, Leslie Ramsammy, Guyana’s agriculture minister, told IPS. “We have to do a much better job in educating our people about the mangrove,” he said.

“While some of us seem to now know that mangroves are an important part of our defence against an encroaching sea, against rising sea water, not every citizen sees mangroves as a good thing or as a necessary thing.”

For those who did and do consider mangroves important, it has taken several attempt to figure out how to help protect them.

Initially, “we did mangrove planting in the area, but because the elevation of the mud was not up to the required level, erosion took place. All of the mangrove trees we planted were destroyed,” Wood told IPS.

So the technicians went back to the drawing board and came up with the idea of constructing geotextile tubes to help natural regeneration. A biodegradable tube filled with sand and water is used to form a barrier so that at high tide, muddy water can enter the area and sediment left behind can help build the soil up to a necessary level.

“Spartina grass is then planted in the area,” Wood explained. “We have found that the mangrove seeds would get caught in the grass and would later germinate.” Because of the tubes and the grass, she said, “in this area, we are fortunate to have regeneration” of the mangroves.