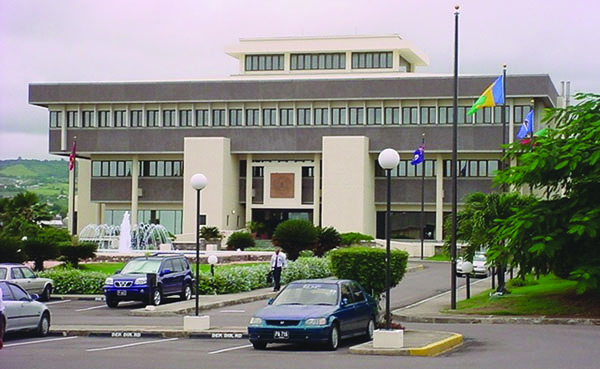 BASSETERRE, St. Kitts CMC – Economic conditions within the Organization of Eastern Caribbean States (OECS) are expected to remain relatively subdued over the next few months even as preliminary data suggest that economic activity in the sub-region expanded at a modest pace during the period January to June 2013.

The St. Kitts-based Eastern Caribbean Central Bank (ECCB) in the just released April to June 2013 Economic and Financial Review, noted that the major sectors such as construction, hotels and restaurants, agriculture, livestock and forestry recorded an increase in output.

But it noted that output in the wholesale and retail trade and financial intermediation sectors contracted. The ECCB said the expansion of economic activity was reflective of the general improved performance across the Eastern Caribbean Currency Union (ECCU) member countries with the exception of Anguilla, which recorded negative economic growth during the first half of 2013.

Construction activity, which is one of the major drivers of economic activity in the sub-region, is estimated to have increased at a measured pace during the first six months of 2013 in contrast to contraction in the corresponding period of 2012.

“The pick-up in construction sector activity was especially robust in the public sector as the performance in the private sector was somewhat restrained,” the ECCB said, noting that public sector construction was robust in Grenada, Montserrat, St. Lucia and St Vincent and the Grenadines while Dominica and Anguilla were the only countries to record a reduction in capital outlays.

The ECCB said in the private sector construction activity continues to be negatively impacted by persistent fragilities in the global financial system following the global economic and financial crisis. Private investment flows, especially in the tourism industry have declined, leading to a fall-off in private non-residential construction activity.

“Grenada and St. Kitts and Nevis are the only countries with noticeable activity in private non-residential construction as a number of tourism related projects are taking place. In Grenada activity in the sector was fuelled by the expansion of the Sandals LaSource Grenada Resort and Spa and the National Insurance Scheme commercial complex. In St. Kitts and Nevis work continues on the Golden Rock Commercial complex and the Kittitian Hill resort.”

The ECCB said that private sector residential activity appeared to have increased marginally across the OECS, as evidenced by a 0.7 percent increase in commercial bank lending for home construction and renovation.

“The expansion in this particular type of credit was however, concentrated in two territories; Antigua and Barbuda (1.8 percent) and St. Lucia (1.2 percent), with more modest increases in Anguilla and St. Kitts and Nevis of 0.5 percent and 0.1 percent respectively. All other territories recorded declines.”

The ECCB said that developments in the tourism industry were less than favourable for the first six months of 2013.

Central Government capital expenditure rose by EC$68.4 million (One EC dollar =US$0.37 cents) to EC$432.9 million in contrast to an EC$75.4 million reduction in the corresponding period of 2012.

The ECCB, which serves as a central bank for Antigua and Barbuda, Dominica, St. Lucia, Grenada, St. Vincent and the Grenadines, St. Kitts-Nevis and Montserrat,  said prices were largely unchanged across the ECCU as most of the member countries either showed a deceleration in the pace of inflation, or registered a decline in prices.

It said the merchandise trade deficit is estimated to have narrowed, on account of a decrease in import payments.

“The consolidated accounts of the central governments resulted in a smaller overall fiscal deficit relative to that in the corresponding period of 2012, partly as a result of an increase in revenue collections. “

But the ECCB said notwithstanding the smaller combined overall deficit position of the central governments, the outstanding debt of the public sector increased, while in the banking sector, monetary liabilities and net foreign assets increased, while domestic credit decreased.

Commercial bank liquidity expanded, and the spread between the weighted average interest rates on loans and deposits narrowed, the ECCB said.

It said that domestic economic conditions are expected to remain relatively subdued over the latter half of the year, in line with the seasonal performance of the tourism sector, although public sector infrastructural projects are expected to support gains in construction output.

“The opportunities for employment gains remain constrained, pending a broader based economic recovery, but targeted improvements are poised to be realized in several islands benefitting from new foreign investment activities. Price conditions should stay relatively mild, with domestic fuel and energy costs fluctuating, in tandem with movements in global oil prices.

“Therefore, real economic activity is expected to increase at a moderate pace in 2013,” the ECCB said, noting however that the outlook “is contingent on developments in the global economy, in particular the recent Federal government shutdown in the United States given the dependence of the ECCU economies on international trade with that country and Europe”.

The ECCB said that while the economic recovery in the US appears to be established elsewhere the outlook is less certain.

“Against this backdrop, demand in these countries for goods and services exported by ECCU member countries is expected to remain subdued. In addition, investment flows, as well as remittances are likely to be constrained.”

The ECCB said that output in the tourism industry is likely to be below 2012 levels, notwithstanding the increased spending on marketing by some member countries and the securing of additional airlift.

“This forecast is predicated on the developments for the first half of 2013 which recorded lackluster growth, in which stay-over arrivals slowed and activity in the cruise sector contracted. Developments are unlikely to be reversed for the rest of the year.

The ECCB said the aggregate fiscal position was expected to deteriorate for 2013 despite the increase in current revenue.

It said while current revenue collections have risen, it is the non-tax receipts that have buoyed the overall performance as tax revenues have been flat. Central Government capital expenditure is expected to continue increasing as member countries increase outlays to enhance the physical infrastructure after declines in public sector investment in 2012.

Current expenditure is also expected to increase as member governments purchase goods and services in tandem with the increase in capital outlays.

“Against this backdrop the overall deficit is expected to increase as total expenditure is likely to exceed total revenue collections including grants,” the ECCB said, noting that in banking sector, monetary liabilities and liquidity are expected to increase as savings deposits grow associated with the spinoff effects of increased foreign investment in the region.

“This impact could be mitigated somewhat by sustained weakness in domestic demand, the challenging employment situation and the elevated loan arrears situation, which has prompted more stringent underwriting standards by financial institutions.”

“Developments in relation to the net foreign assets of the banking system will be influenced by the extent to which inflows of foreign direct investments, official flows and travel receipts are impacted given the dimming forecast for major trading partner countries.”

But the ECCB said downside risks to the economic outlook are less acute than before as the global economy has shown signs of growth albeit at a slow and uneven pace.

“In general, risks to the outlook are balanced with the Currency Union poised to record positive economic growth. The major downside risks to the economic outlook include the persistent threat of storm damage, and rising geo-political tensions in the Middle-East. The heightening geo-political tensions in particular could contribute to the escalation in global energy prices and conversely dampen economic prospects for the ECCU,” the ECCB noted.