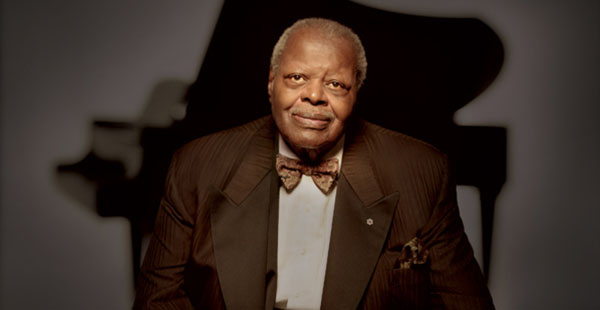 Hosted by York University music professor and Oscar Peterson Chair in Jazz Performance, Ron Westray, the event is an opportunity to celebrate the young musicians who have received the prestigious $40,000 entrance scholarship, launched in York’s Department of Music in 2009.

The scholarship recipients who will be celebrated at the gala are: guitarist Eric Miller (2010), drummer Sarah Thawer (2011) and drummer Kairon Haynes (2012). This year’s recipient will be announced at the gala.

From teaching them in class, watching them perform and occasionally even sharing a stage with them — Haynes has accompanied Westray in outreach performances and clinics at local high schools — Westray is full of praise for the young musicians.

“I’m very proud of the skills and accomplishments of the Oscar Peterson Scholarship recipients,” said Westray. “All three are talented performers with great attitudes. Eric is at the top of my jazz theory class, which focuses on musical mathematical concepts as complicated as algebra or calculus. Sarah is a real go-getter and multi-instrumentalist, who performs in virtually every ensemble open to her in our program. And Kairon is a very busy performer on campus, but even more so, outside of York within the gospel community, where he developed his skills from a very young age.”

The Marcus Roberts Trio, an American jazz institution, featuring Marcus Roberts on piano with Rodney Jordan on bass and Jason Marsalis on drums, will headline the entertainment at the gala.

Roberts, a dedicated educator as well as an internationally acclaimed performer, will feature Oscar Peterson’s “Canadiana Suite” in his set list as a tribute to the late, great pianist and to support the student outreach initiatives that continue the legacy of the legendary Canadian jazz artist at York.

Roberts’ live performances in solo, small ensemble and orchestral settings, his original compositions and arrangements, and his extensive discography reflect his tremendous versatility as an artist. He played with the Wynton Marsalis Band from 1985 to 1991 and has led his own trio since 1990.

His career highlights include his first prize win at the Thelonious Monk International Jazz Competition in 1987, collaborations with symphony conductors Seiji Ozawa and Charles Dutoit, his artist residency at the 2002 Olympic Winter Games in Salt Lake City, and his induction into the Jacksonville Jazz Hall of Fame in 2003. He is a professor at Florida State University School of Music and serves as associate artistic director of jazz education for the Savannah Music Festival.

“Marcus was my first band leader and my mentor. My colleagues and I are thrilled to host him at York, and I’m looking forward to introducing our Oscar Peterson Entrance Scholarship winners to him.”

Supported by a $1-million endowment from the Government of Ontario, the Oscar Peterson entrance scholarship provides $10,000 per year for up to four years, providing the recipient maintains high academic standing.

To be eligible, candidates must demonstrate exceptional musical ability, especially in the field of jazz performance, and must be facing social, economic or personal barriers that could inhibit their ability to pursue a university degree. Applicants must be Ontario residents and hold Canadian citizenship, permanent residency or protected person status.

“York University is providing this great opportunity,” said Westray. “If you, or a young musician you know, have a passion for jazz performance and are eligible for this award and prepared to give it a go, I want to hear that audition.”

Applications for the next Oscar Peterson Entrance Scholarship are due April 4, 2014. Potential candidates can find detailed information on York’s future students scholarship website.

Admission to the Oscar Peterson Scholarship Gala, which will be held at York University on Friday, November 8 at 7:30pm, is: $25 for adults and students and seniors $15. Tickets can be purchased from the Box Office, by calling 416.736.5888 or online at www.finearts.yorku.ca/perform/box-office.