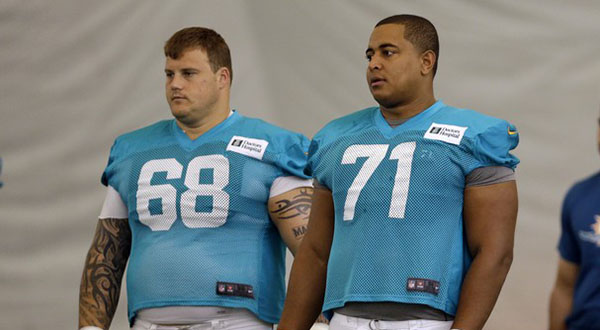 By Gregg Rosenthal
Around The League Editor

The NFL started its investigation Monday into the situation surrounding Miami Dolphins offensive tackle Jonathan Martin. With guard Richie Incognito suspended indefinitely by the team, new details emerged about the veteran guard’s involvement in Martin’s absence from the Dolphins.

NFL Media’s Albert Breer reported Monday that Martin shared texts and voice mails with his parents on Saturday, and turned them over Sunday to the Dolphins and the league, according to sources close to Martin and involved in the investigation. The evidence implicates Incognito and, to a lesser extent, Dolphins center Mike Pouncey. Breer reported that Incognito used a racial slur and threatened violence in one of the voice mails. The NFL and the Dolphins have heard the voice mail.

The transcript was among the evidence given to the NFL and NFL Players Association.

Martin, who is expected to be placed on the non-football injury list this week, notified the Dolphins on Sunday about alleged player misconduct. Incognito was suspended later in the day for conduct detrimental to the team.

“We received notification today from Jonathan’s representation about allegations of player misconduct,” the Dolphins said in a statement Sunday. “We are taking these allegations very seriously and plan to review the matter further. We have also reached out to the NFL and asked them to conduct an objective and thorough review. As an organization, we are committed to a culture of team-first accountability and respect for one another.”

A Dolphins source, who was addressing Incognito as a player, told NFL Media Insider Ian Rapoport last week that the team wasn’t planning to bring back the 30-year-old — who’s due to earn $4 million in 2013 — after this season.