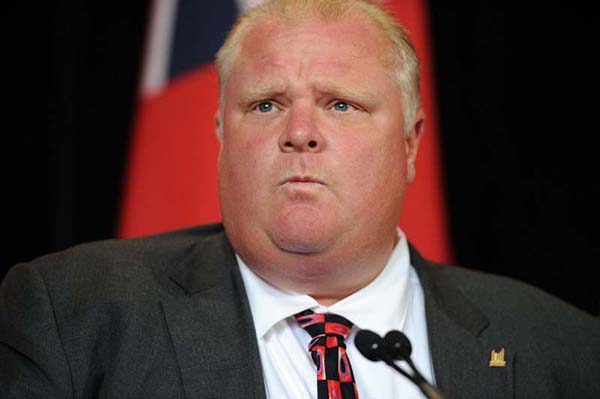 Calls Grow For Toronto Mayor Ford To Step Aside

TORONTO, Ontario – Toronto city councillor, Michael Thompson, has added his voice to the chorus of councilors calling on Mayor Rob Ford to step aside or step down to deal with his personal issues of drug and alcohol use.

On November 1, 2013 Thompson, a member of Ford’s executive committee, wrote a letter to the mayor telling him that he is concerned that long term his situation could have consequences for Toronto and folks looking at doing business in Toronto.

“I had also stated to him that I felt that in the best interest of the city, given what’s taking place with him personally, he needed to explain to Torontonians what was going on, what had transpired, and in failing to do so I would think that it was sufficient for him to simply step down from the position,” Councillor Thompson said.

He said that if the mayor failed to do that then obviously that would mean that there is something that he has to hide.

“I’m not pronouncing him guilty or anything but there’s just too many things that are coming forward that continues to create a situation around the mayor which is, in my view, is untenable.”

City Councillor Denzil Minnan-Wong, another executive committee member, has announced that he will amend his own motion that if the mayor does not step down on his own, that council petition the province to have him removed.

Other councilors are asking for the mayor to step aside including his brother, Doug Ford, who told him to seek a bit of counseling and take a couple weeks off.

The letter from Thompson was written before Mayor Rob Ford’s admission on November 5 that he has smoked crack cocaine.

The mayor’s denial of smoking crack cocaine or of the existence of a video showing him doing so started on May 16 after the U.S. gossip website, Gawker, published a story about the video.

The Toronto Star posted its story a day after, claiming that its reporters had also viewed the video.

Mayor Ford’s denial continued until Police Chief Bill Blair held a press conference on October 31 in which he said the police have a digital video file that it recovered which depicts images that are consistent with those that have previously been reported in the press.

This happened on the same day of the release of a stack of court documents detailing an extensive police surveillance of the mayor and his friend, Alexander Lisi. Lisi is accused of trying to extort alleged gang members who were shopping around the video.

On his radio show on November 3, Mayor Ford apologized to his family, taxpayers and the Toronto city council for his drunken behavior while at a public event.

Two days later, he admitted to smoking crack cocaine a year ago while in a drunken stupor. He also announced that he would not resign but would continue the work that he was elected to do in 2010.

Another video released by the Toronto Star this week showed the mayor inebriated and swearing.

The radio show that the mayor did with his brother on Sundays 1-3p.m. was cancelled by Newstalk 1010 on Friday – a decision which was mutually made.

Despite the saga unfolding at City Hall, Councillor Thompson said that it is more of a distraction and is not negatively affecting his work as a councillor.

He said the situation is causing the wrong type of impression that the council wants to convey about the city with respect to the mayor.

However, he thinks it is something that people understand, that it is an isolated situation and not something declaring that Toronto is a place to come for crack cocaine or drugs.

“That’s not what we’re trying to promote. People understand that. But nonetheless, I think that we have to take advantage of this news that’s getting out there about our city in order to promote what is good about the city and to promote who we are, to let people know about all the great things about our city and that it is the place to want to invest in and so on. That’s my job to promote the city as a place to invest in and so on,” he said in a telephone interview, shortly after receiving a call from New York about the situation at City Hall.

The councillor is also the chair of the economic development and culture committee of Toronto city council.

Councillor Thompson said his letter also conveyed to the mayor that he had heard from people in Europe, Asia and Africa about the situation related to the mayor.

There were a thousand delegates from around the world and across the country in Toronto for the International Economic Forum of the Americas, October 29 to 31.

On October 31 when Police Chief Bill Blair held the press conference about the video, delegates got a wind of it and asked Thompson, who was the keynote speaker at the conference the day before, about it.

He said that in the letter he told the mayor that this was creating the wrong kind of attention for the city.

Councillor Thompson has no idea when things will return to normality at City Hall with less media intensity but said, “it all depends on what happens with the mayor, it all depends on whether or not there is additional information, the need for the media to have more conversation, and so and so forth.”

He said it also depends on the longer that the mayor stays in place, whether or not he will actually take some time off to go and do whatever he needs to do to get well or just simply leave all together, and if things come out more about any revelations about the mayor’s activities, the media will always be around.

“If the mayor moves forward then there’s less need for that to occur with the media,” he said.

Some residents of the city are also calling on the mayor to take some time off to deal with his personal matters.

“I think that he should take some time off. As a youth worker, I find that its not good mentorship for youth, especially for those young people who went to City Hall [on Take Our Kids to Work Day, Nov. 6],” said Masani Montague, a resident of Toronto.

Montague told her 13-year-old daughter that if anyone admitted to doing what the mayor confessed they would be arrested right away and therefore the system is not fair.

Makeda Silvera, another resident, said she feels a lot of empathy for Mayor Ford.

“He’s obviously ill. I mean he’s in a lot of trouble and I think really that underneath he’s really in a lot of pain. On that level, I feel a lot of empathy around the whole situation. But at the same time I’m really also concerned the racist and the homophobic remarks, that he allegedly made on the video, that the media do not seem to be dealing with those two issues, “ she said.

She said the story about the mayor’s use of crack cocaine is very important because he is a politician who really needs to set standards for citizens and young people.

Silvera is hoping that on some radio or television programs people will start discussing the aspect of the alleged racist and homophobic comments made by the mayor on the video.

She said she listened to a radio show recently and was quite shocked in hearing many Black and Caribbean callers suggesting that the mayor be given a chance because “he is so great and he has done a lot for our community,” while quoting the Bible about forgiveness. She said nothing was mentioned about his racist and homophobic comments.

“I think what I’m most fazed about is the reaction in the way that public discourse has happened around this. I mean we know that ever since this story came out his [the mayor’s] public ratings have actually gone up. And, ironically as a Black man, crack has been a weapon used by institutions to keep Black men in poverty, keep Black men in violence and keep Black men on the streets,” said Rodney Diverlus, president of the United Black Students at Ryerson.

He said that ironically, the same tool that’s used against Black people is “actually used now as the PR tool to give a rich White man with immense amount of privilege more popularity.”