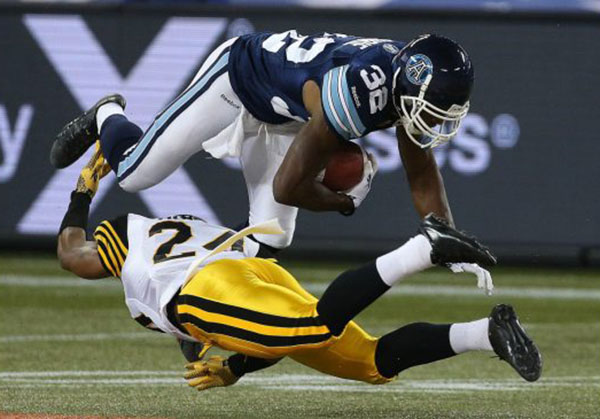 This clearly wasn’t the ending to the season the Argos receiver had envisioned.

“Will be very hard (to walk out of the locker-room),” an emotional Owens said, fighting back tears. “I’m still in my gear. I want another quarter. I’m not ready for the off-season, man.”

The 2012 Grey Cup champions dropped a 36-24 decision to the rival Hamilton Tiger-Cats, a game that started so well for the home team before a crowd of 35,418 at Rogers Centre.

Eleven-year veteran, Ricky Ray, was virtually unstoppable in leading the Argonauts to a 24-17 half-time lead, before the Ticats turned the tide in the second half.

On Toronto’s final drive, Ray threw two high pass incompletions to Owens, and the Argos turned the ball over on downs.

“It’s tough, it sucks, it breaks my heart. It breaks my heart,” Owens said. “We believed that we were built for those moments, when the game’s on the line, we play at our best. I thought we were going to get it done. We came up just that short.”

Marc Beswick ran in for a Ticats touchdown on the game’s final play when Owens’ desperation lateral on his kick return was intercepted.

“We had one more chance, I thought I was going to take it to the house to be honest with you when I broke up the middle, you just can’t end the game getting tackled, in that situation, you just can’t,” the fourth-year Argo said. “I just threw it backwards and hopefully somebody was behind me who could have caught it . . . I dunno, it was just one of those plays.”

Spencer Watt, with two, and Zach Collaros had the touchdowns for Toronto. Swayze Waters had a field goal and three converts.

The loss spoiled what started out as a spectacular game for Ray, who was 17-of-20 passing for 279 yards and two TDs at halftime. However, the Argos star finished 22-for-32 and 329 yards.

Ray’s biggest play was a 59-completion to Andre Durie that put Toronto at the Hamilton one-yard line at 8:05 of the second quarter. Collaros finished the drive, scoring on a one-yard run to put the Argos ahead 21-10 – seemingly headed for victory.

“They made some good adjustments, started bringing a little more pressure, just got me out of my rhythm,” Ray said on Hamilton’s second half. “I just didn’t play well enough in the second half. They did a great job, well deserving.”

Ray shouldered the blame for the Argos’ fruitless final drive.

“Got off to a good start there, a completion, getting some good field position, and I just didn’t make the throws,” he said. “We had some chances there to make some plays and keep the drive going and have a chance to win, and just wasn’t able to do it tonight.”

Argos linebacker Marcus Ball said Hamilton’s offence did a good job of controlling the ball in the second half.

“It seems like we were on the field forever,” he said. “(The Ticats) did little things, and penalties extended drives.

“When you’re going against (Ticats coach Kent) Austin and (quarterback Henry) Burris, they are so disciplined, they make few mistakes and make you pay for yours. Burris is a great quarterback, but I think his legs killed us today.”

Burris finished 27-of-40 passing for 371 yards and two TDs but the 38-year-old also showed his legs still have life, rushing five times for 51 yards.