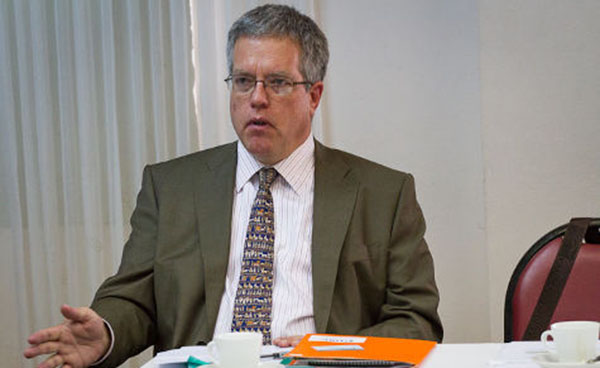 Canada’s high commissioner to Jamaica, Robert Ready, says the contribution that Jamaicans have made to Canada is extraordinary.

Referencing the book, Jamaicans in Canada: When Ackee Meets Codfish, Ready said he was glad to have purchased some of the last copies, which he has used as presentations to honoured guests at the high commission.

He said Canada has been very active in Jamaica before independence in providing development support, technical cooperation and economic development initiatives that have become important contributors to Jamaica’s development.

The high commissioner was the guest speaker at the P.A.C.E. (Canada) Adopt-a-School Brunch held at the Hilton Suites Conference Centre in Markham, Ontario on November 17.

“Both our countries have been enriched by each other over the years,” said Ready.

He said the high commission’s efforts include working with the government there but it also seeks to leverage initiatives involving Canadians, including members of the Jamaican diaspora, to maximize advantage for all concerned.

“From a Canadian perspective in Jamaica, we’re focused on three broad priorities: building economic opportunity and increasing mutual prosperity, supporting efforts aimed at increasing security and justice, and continuing to foster people to people ties with emphasis on health and education.”

The high commissioner took up his duties in Jamaica in October 2012 and was summoned back to Canada shortly after to participate in the official visit to Canada of Prime Minister Portia Simpson Miller.

He said the visit, although cut short by Hurricane Sandy, left him with some indelible impressions such as that the leadership on both sides understand the importance of the bilateral relationship.

He noted that the Jamaican leadership is well connected to Canada through its own Canadian experiences and through the Jamaican diaspora that is here.

The Canadian leadership, he said, demonstrated quite clearly that they recognize the positive contribution Jamaicans have had and continue to have in Canada.

In addition to the leadership relationship, Ready said there is a great deal of rhythm of ministerial and other visits that take place over the course of any given year.

Ready said that in his former role, he was the chief air negotiator for Canada and had the opportunity to negotiate an open skies agreement with Jamaica.

“I think we are starting to see the results of that new agreement this year. Close to 400,000 Canadian visitors are going to Jamaica. Canada is of course second only to the United States in this regard,” he said.

He said the high commission also helps Canadian firms that are interested in doing business in Jamaica, focusing particularly on renewable energy – wind and solar.

It is also helping with the Jamaican priority of developing a Logistics Hub as an economic project.

Recently, Ready participated in an announcement that set up a partnership between Excelsior College in Kingston and Niagara College and Memorial University here to help in preparing the labour force of Jamaica for the logistics hub.

With regard to Canada’s support for the security and justice aspects of Jamaica, Ready said one of the first announcements he made after Hurricane Sandy was the presentation of polygraph equipment and vehicles as well as the opening of a testing and training facility at the Jamaica Constabulary Force in Twickenham Park, St. Catherine.

He said this project has allowed the JCF to secure training for polygraph examiners at the Canadian Police College here and to begin to use polygraph procedures in integrity screening of officers and recruits.

A year or so ago, Jamaica and Canada concluded arrangements to establish an operational support hub for the Canadian forces in Kingston to allow Canada to have a staging area in the Caribbean in the event of future disasters such as the Haiti earthquake.

Canada pledged $20 million to help with the reform of Jamaica’s justice system. There was also a $27 million funding commitment that was announced over this past year for citizens’ security and justice.

The details of this program are still being worked out. It was a direct response by Canada to a request by the Jamaican government in the context of the finalization of the agreement with the International Monetary Fund.

Regarding the people to people ties, Ready said there is a wide variety of activity, some of it involving governments but in many cases, involving only organizations or individual Canadians who see a need and want to contribute to addressing it.

In the healthcare sector, there is Sick Kids Hospital and the Paediatric Oncology Unit which will roll out a program Caribbean-wide but is of significant benefit to Jamaica to improve outcomes for Jamaican and Caribbean youth.

Sunnybrook Hospital is active with the Ministry of Health in providing technical assistance and trying to procure much needed equipment for Jamaicans.

Ontario’s lieutenant-governor, David Onley, is trying to renovate and get a project started at the Sir John Golding Rehabilitation Centre in St. Andrew.

On the education side, Ready said there are some small scale ones involving the high commission funding the Salvation Army School for the Blind and funding some basic schools with much needed computers or software to allow for innovative education, particularly in the case of the school for the blind.

He participated in a Food For The Poor project, which included the painting of a basic school in Accompong, St. Elizabeth.

His said his visits to basic schools like these really touched him and reminded him of some of the photos and stories of his father who was an educator in Canada.

He also received a visit from a group of early childhood Canadian professionals to engage with their colleagues in Kingston for several weeks.

Canada has an annual education fair that it runs in Jamaica. Three weeks ago, 1700 students attended the fair, which featured 28 Canadian colleges.

In her remarks, Mary Anne Chambers, president of P.A.C.E. (Canada), who has six months left in her four-year term, said that she would move on with very fond memories of tremendous demonstrations of human kindness.

Listing some of the achievements, she said more than 100 schools have been able to acquire playground equipment so that children can develop physical fitness, critical life skills and positive attitudes towards each other as they play together.

One hundred early childhood practitioners have been given the opportunity to receive formal training and certification so that the children that they are teaching every day can be better prepared for success rather than falling short in literacy and numeracy assessments when they go on to primary school.

More than CDN $400,000 in sponsorship donations have been provided to adopted basic schools and early childhood institutions in Jamaica and childcare centres in Canada.

Schools have used these funds to provide nutritional meals for the children, in many cases their main meal for the day, to purchase stoves and refrigerators, learning resources, chairs and tables, to pay utility bills and the fees to reconnect their electricity when their service has been disconnected because they have not been able to pay their bills, to repair roofs and to install fencing so that the children can be safe

Thanks to the Dr. Ralph Masi Family Health Fund, there is creative, state of the art learning resources for the provision of parenting education programs and early childhood curriculum workshops delivered through early childhood resource centres in Jamaica’s 14 parishes are serving 125,000 children from birth to age 5, 9,000 early childhood practitioners and 5,200 parents each year.

The fund also provided 45,000 workbooks that have been produced and delivered to basic schools and early childhood institutions.

A year ago, P.A.C.E. (Canada) recognized two organizations for their outstanding generosity, the Carpenters’ District Council of Ontario and the Royal Bank of Canada, by presenting them with its inaugural Community Builder Awards.

The CDN $50,000 donated by the Carpenters became seed money for the creation of a very special Centre, an Early Childhood Centre and Practicing School at Sam Sharpe Teachers’ College just outside Montego Bay, which will also serve as a Centre for Special Needs Assessment and Intervention so that children who live in the north west part of the island will no longer have to travel for up to 4 hours to seek attention in Kingston.

“Construction of the centre is scheduled to commence next month with the opening anticipated for early 2014. The $50,000 seed that the Carpenters sowed has now grown to more than CDN $108,000, thanks to the generosity of other organizations, yourselves and other individuals like yourselves who believe that children deserve to have a bright future, enough to help to convince Jamaica’s Ministry of Education to approve and contribute to the establishment of the Centre,” said Chambers.

She also announced that University of Toronto Scarborough students who are of Jamaican descent would launch a campaign on the campus for P.A.C.E. (Canada) soon.

A $1000 donation will also be made to the Africentric Alternative School.

The award was created to honour individuals and organizations that have demonstrated outstanding social awareness, inspiring community spirit and a commitment to empowerment through education.

Sheila Sealy Monteith, Jamaica’s high commissioner to Canada, said she spent an entire day with the education system in western Jamaica – from basic to primary to all age – in June on Diaspora Day.

“When we invest in early childhood education, we equip our schools appropriately. P.A.C.E. (Canada) is doing the right thing,” she said.

Dr. Mavis Burke, founder of the organization, advised that in order for P.A.C.E. (Canada) to grow it would have to take into account the young people here as well.

Velma Morgan, the newest sponsor of a basic school, was presented with a commendation for sponsoring Alley Infant School in Clarendon, in honour of her father, Barrington Morgan, who attended that school.

He died a couple years ago and his ashes were recently spread in a river in his hometown in Clarendon.