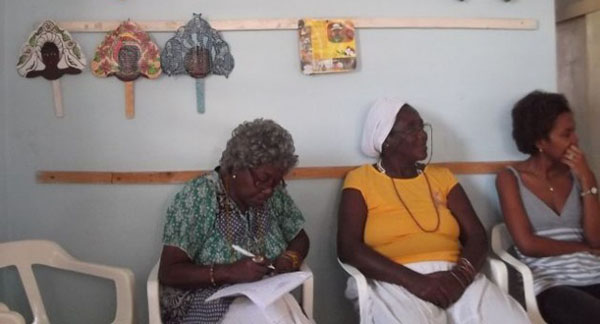 HAVANA, Cuba (IPS) – From a very young age, Irma Castañeda has braided her curly hair and cared for it with natural recipes inherited from her mother, ignoring the widespread conception that Black women’s hair is “ugly” or “bad”.

Gently, with skilful hands, she aims to chip away at something much more complex: the silence surrounding the issue of race, a subject that was taboo for decades in official rhetoric, according to which racism was eradicated by the Cuban revolution in 1959.

In the Balcón Arimao barrio in the largely Black municipality of La Lisa, on the west side of Havana, Castañeda and nine other women have launched an effort to improve self-esteem, teaching hairdressing techniques and traditional cosmetics recipes for Black skin, because they are not available in stores.

“Whether it is straightened or worn in an Afro or dreadlocks, hair can look beautiful on a Black woman, who has the right to have resources for taking care of her image,” Castañeda told IPS.

“We want to break the stereotype that we Black women are less beautiful, without trying to look like White models,” added Castañeda, an educator by profession and promoter of the project Rizos (Spanish for “Curls”).

For these hairdressers, facial masks and tweezers are tools for raising awareness around problems faced by people of African descent, who officially account for 36 percent of Cuba’s population of nearly 11.2 million, although researchers such as Esteban Morales estimate the non-white population at around 60 percent.

Rizos is one of a number of initiatives of the Afrodescendent Neighbourhood Network (Red Barrial Afrodescendiente, RBA), which is reviving anti-racist activism in Havana.

About a year ago, activists from various urban communities founded the RBA to take research and debate about the race question into the neighbourhoods. Every month, in a community centre in La Lisa, lectures are given to train 35 local leaders.

All of these people, who work in different jobs and have different educational levels, assume the responsibility of taking what they learn to their families, neighbourhoods, and workplaces.

Marlene Bayeux, a 63-year-old former veterinarian, says she knows what it feels like to be underestimated. “To be respected as a professional, I had to overcome a racist boss, but if I had been equipped with the arguments that I learned in the network’s workshops, I would have saved myself a lot of grief,” she told IPS.

Bayeux feels that she contributes to the cause as part of La Muñeca Negra (The Black Doll) – a group of artisans who create papier-mâché figures inspired by female Afro-Cuban deities.

Another group sews black rag dolls, but they are dressed as flight attendants, doctors, nurses, and soldiers, instead of the typical religious or slave woman rag dolls.

While small, these efforts are important because of the direction they are moving in, historian Daisy Rubiera told IPS. She is part of the Cuban chapter of the regional network of African Descendants from Latin America and the Caribbean (ARAC), created in September of last year.

Rubiera described the work being carried out by academia and intellectuals as insufficient; for years, they have been talking, carrying out research and even making money on the issue, but they have not managed to really reach the wider public, she said.

“The historic causes of racial discrimination do not appear in the official texts, so they go unnoticed by the majority,” said Rubiera, who is an advisor to the RBA.

Maritza López, who is the RBA’s coordinator and has extensive experience in social work in poor neighbourhoods, said discussions need to happen with the people most affected, who are in the streets and not in bookstores, theatres or academic seminars.

“Academic activism opened up the road, but the intellectuals need to come down to our neighbourhoods to transmit their knowledge and wisdom in terms that people can understand,” López told IPS.

In Cuba, racial discrimination is manifest above all in subtle personal, social, and cultural prejudice and attitudes. It is low-key because public displays of racism are not socially acceptable.

“Sometimes Black people do not perceive that they are being discriminated against because socially, the problem is accepted as natural,” said retired high school teacher, Hildelisa Leal.

Segregation and discrimination are also reflected by the fact that Blacks or people of mixed-race are a majority among the poor and a minority in decision-making posts and emerging economic sectors such as tourism and self-employment, according to researcher María del Carmen Zabala.

According to her studies, less than 20 percent of Cubans who leave the country in search of a better future are non-whites. For that reason, most of the remittances sent home by immigrants – an essential source of income for much of the population – go to White families.

According to the 2002 census, while unemployment stood at 2.9 percent among Whites, it rose to 6.3 percent among the Black and mixed-race workforce. And with respect to higher education, 4.4 percent more Whites than non-whites held a degree.

These figures have not been updated with information from the 2012 census.

President Raul Castro has referred to increasing the presence of Blacks in political office.

In the legislative National Assembly elected this year, 37 percent of seats are held by non-whites.

In January 2012, the ruling Communist Party declared its intention of “confronting prejudice and discriminatory conduct based on skin colour that runs counter to the Constitution and law and hurts national unity.”

However, activists are demanding more resounding actions in this nation, which has the second-highest proportion of Blacks in Latin America after Brazil.

In an award-winning essay, researcher Zuleica Romay suggested a general law against discrimination.

Learning about the cultural and historic roots of racism has helped Damayanti Matos, a member of the RBA, feel more empowered.

“I became aware of my rights – it used to seem normal for people to address me as ‘negra’ (Black woman),” she told IPS. “Now I know that behind that innocent gesture, there is a history of discrimination.”