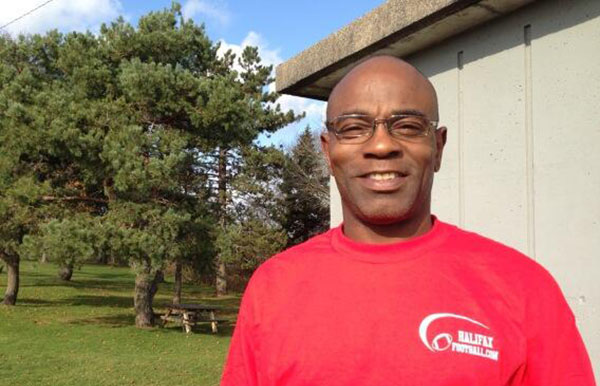 Tynes – a tireless volunteer, who has deep roots in the Halifax football community – has earned thousands of dollars worth of new equipment and bursaries for minor football in North Halifax.

He grew up in a family of 13, but through football was able to attend Acadia University, where he captured Canadian University Rookie of the Year honours and led the underdog, Axemen, to a Vanier Cup victory in 1981.

Now a volunteer coach with the Halifax Argos ─ a Halifax Gridiron Football Association club that draws largely from the city’s lower-income North side neighbourhoods ─ Tynes was also inducted into the Nova Scotia Sports Hall of Fame, earlier this month.

“I have seen Quentin Tynes ─ known as ‘Snoopy around here’ ─ take 30 kids from different parts of town, different economic backgrounds and different cultures, and mold them into a single cohesive unit,” said Kent Clarke, one of Tynes’ assistant coaches, in a nomination essay.

“He uses this diversity as a life lesson for the kids, and combines it with hard work, dedication and discipline. The time he dedicates and his willingness to share his love of football with every kid who is interested makes football possible in our community.”

Now in its 15th year, the NFL Youth Coach of the Year award is presented by BlackRock Canada, an industry-leading investment management and services provider. Run in conjunction with Football Canada, the award is designed to recognize community or high school level coaches across Canada who use football to make a positive impact on their communities. The award is not based on wins and losses.

“Coach Tynes’ tireless dedication to both flag and tackle football in Halifax deserves recognition,” said Dan Quinn, Managing Director, NFL Canada. “By instilling life values and inspiring young people through football, Quentin Tynes embodies everything we look for in an NFL Youth Coach of the Year.”

Tynes was selected from a shortlist of 10 coaches from across Canada to receive the honour. A panel of journalists, Football Canada and NFL officials selected the winners. His former coach, Queen Elizabeth High School’s Mike Tanner (Halifax), was the first-ever recipient of the award in 1999.

More than 450 submissions nominating more than 300 different coaches from across Canada were received. In addition to the equipment donation Tynes will be flown to Toronto and honoured by the NFL at the December 1, 2013 regular season game between the Buffalo Bills and Atlanta Falcons at Rogers Centre.

BlackRock Canada will also help cement the winning coach’s legacy, creating $5,000 in bursaries that will assist young players in the coach’s community who are in financial need.

“We are proud to participate in a program that recognizes the great work done by our local coaches, and helps give our youth a chance to play organized sports while being inspired by community leaders like Coach Tynes,” said Noel Archand, Managing Director of BlackRock Canada.

Ontario Provincial Police Constable, Harvey Milne, who volunteers his time coaching at Ernestown High School and running Kingston’s U-12 OPP Football League, was named a runner-up and will receive $2,000 in new equipment.

“Harvey Milne instills a sense of pride and accomplishment through organized football,” said Kingston’s Robert Martell in a submission essay. “For ten months of the year his volunteer efforts ensure that approximately 250 children, ages five to twelve, have an opportunity to learn and play organized football.”

John Turner, a teacher and coach in Summerside, PEI, was also named runner-up and will receive $2,000 in equipment for minor football in Summerside.

Over the past 15 years the NFL Youth Coach of the Year award has contributed more than $180,000 in equipment to deserving programs, and has put the spotlight on the grassroots-level coaches who are the engines that drive football in Canada.

“At all levels of the game, volunteer coaches play a critical role in enabling thousands of participants the opportunity to enjoy the sport each year,” said Shannon Donovon, Executive Director, Football Canada. “Football Canada is proud to support the recognition of deserving coaches who give back to their communities, passing on their passion for the game to future generations.”

As Halifax Chronicle Herald reporter, Jennifer Taplin, pointed out in a recent article, Coach Tynes is driven by a belief that football gives kids, especially low-income kids, self esteem, confidence and the possibility of advanced education.

“The thing about football is there are lots of players on the team, so it gives them a lot of life lessons on how to get along with different personalities and live with different cultures,” Tynes told Taplin.