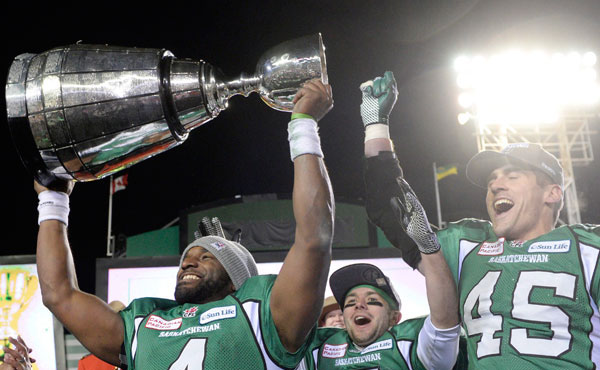 REGINA, Saskatchewan – Rider Nation was in full celebration Sunday night, as the Saskatchewan Roughriders captured the 101st Grey Cup Championship thanks to a 45-23 win over the Hamilton Tiger-Cats at Mosaic Stadium in Regina.

Kory Sheets earned Most Valuable Player honours as he broke Johnny Bright’s single-game record for yards in a Grey Cup game with 197, while Chris Getzlaf took home Most Valuable Canadian thanks to several timely catches.

The party started early for the Riders’ faithful, who jumped out to a 31-6 first-half lead en-route to becoming the third straight team to win the championship on home turf.

After getting a two-and-out defensively to get the crowd into it early, the Riders had some trouble on offence out of the gate. Durant had the ball knocked out of his hands on a second-down play, and while the offence recovered and punted the Ticats took over possession at midfield.

Burris and co. managed one first down, before settling for a 45-yard field goal from Luca Congi to give the Ticats a 3-0 lead.

It took a touch of good luck to get the Riders offence clicking, as Durant scrambled on second down and had the ball knocked loose again – this time only to be recovered by Sheets in the open field. He sprinted 42 yards to move into enemy territory, before running out of room and being knocked out of bounds.

After Durant moved the chains with his legs on a play-action bootleg, the dual-threat pivot went to the air to Simon in single-man coverage for a 15-yard touchdown pass. Riderville erupted, as the home team took a 7-3 lead on the strength of a seven-play, 75-yard scoring drive over 3:06.

The Riders added a field goal to their lead on the strength of a 20-yard boot by Chris Milo, on a drive highlighted by a 38-yard hookup by Durant and Chris Getzlaf on a second-and-long play.

But they weren’t done there. After Burris couldn’t handle the snap and the Ticats were forced to punt, a 15-yard penalty for no yards set Durant and the Saskatchewan offence up with another short field.

Needing 11 yards on second down, Durant hit Getzlaf again to move the chains, before connecting with Weston Dressler and Rob Bagg for two more first downs to the Hamilton 19. Sheets then found more space to the outside for a 15-yard gain, leading to a Jock Sanders three-yard plunge up the middle to give the Riders a 17-3 lead.

The Ticats dodged a bullet after fumbling and losing the ball deep in their own end, thanks to a fumble by Durant on the ensuing possession. But the Roughriders got the quick stop and the ball back in response, and continued to push the ball downfield.

Another long completion to Getzlaf for 29 yards moved the Riders to the one, where Sheets punched it in for his first touchdown of the game to give Saskatchewan a 24-3 lead.

A 48-yard completion to Bakari Grant on the next drive led to a 24-yard field goal by Congi, cutting the Ticats’ deficit to 24-6. But it wasn’t to last.

Sheets continued to his dominant half, going for sprints of 18 and 15 yards respectively. That set-up another big play through the air, as Durant found the league’s all-time yards leader Simon for a 42-yard touchdown.

Before a stunned visitors’ sideline at Mosaic Stadium, the Riders suddenly had a 31-6 lead and by the end of the first half the celebration for Rider Nation was already under way.

The Ticats’ defence settled down in the third quarter, holding Saskatchewan’s high-powered attack at bay.

After throwing an interception earlier, Burris finally took advantage of a blocked punt and short field with less than three minutes remaining in the quarter.

First he went to Fantuz for an 11-yard pickup, before doing the rest himself for an 18-yard touchdown run to cut the deficit to 31-13. They built on the possible momentum swing with a quick two-and-out on defence, returning the offence to the field with possession at their own 51.

After a 25-yard completion from Burris to Tasker, the Ticats added 33-yard field goal by Congi to make it a 31-16 game, cutting their deficit to two scores heading into the final quarter.

But in the final quarter the Riders finally put the foot on the gas once and for all, thanks to some downhill running by Sheets. He bolted for long runs of 21 and 16 yards to pull the Riders from deep in their own end, then when the Ticats finally did get a stop they committed a 15-yard penalty for roughing the kicker.

Durant and the offence took full advantage, as the veteran quarterback found Durant for a long gain down the goal line, and Sheets finished things off with a 4-yard touchdown to give the Riders a 38-16 lead with just five minutes left in the game.

Dessler hauled in a 26-yard catch just a minute later to add to the Riders’ lead, marking Durant’s third touchdown pass of the game.

This was the Roughriders fourth Grey Cup in franchise history and first since 2007.