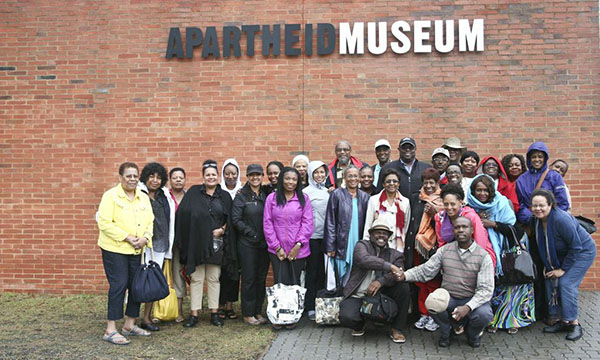 Nelson Mandela: A Legacy Of Forgiveness

When mankind thinks of greatness, we often envision long gone men and women who have shaped our collective communities, both local and global. When we speak of icons, it is the work of the ancestors that is most lauded.

There are days when writers and orators exhaust language in praise of individuals who though important in their own right, do not definitively craft the social consciousness of a people, a nation, or the world. Today is not such a day.

Every great movement archived throughout history, of necessity is spurred by champions who have placed the cause above their own wellbeing. With blood, sweat and tears, these men and women grease the wheels of freedom and ensure that the masses do not forget that the battle continues – no matter how arduous, no matter how tedious.

In the same way that these warriors of freedom come to represent the fighting spirit of each campaign, so too is there often an individual who stands as a beacon of hope, heralding the cry of a people to a global village.

For the South African anti-apartheid movement, that beacon of hope was Nelson Rolihlahla Mandela.

History is replete with the work of this father of a nation; South Africa’s first democratically elected President. I do not seek to regale the reader with the feats of a man imprisoned for 27 years simply for seeking justice and equality. Rather, I would have you feel the warmth of his gaze as you read.

With almost one century worth of living, this legend of a man, this humble, gentle man touched the lives of countless millions. Whether we called him Mandela, Nelson, Tata (father), Madiba (his clan name) or Your Excellency, whether we regarded him highly or not at all, his indelible mark upon the fabric of our society is unchallenged.

For many, the influence of Mr. Mandela is deeply personal. When the world learned that Nelson Mandela had sighed his last earthly breath on December 5, 2013, millions openly wept in seemingly inconsolable grief. Condolences from across the world were not only by virtue of the man himself being a world leader, but also because his life touched so many in a personal way.

One of the most consequential moments during the latter 20th century is the release of Nelson Mandela from prison. On Saturday, February 10, 1990 the freedom fighter who would come to be the catalyst removing minority white rule from South Africa walked out of captivity and into his destiny.

In the same way that his death has sparked worldwide mourning, so then did his long awaited liberty arouse spontaneous personal and national celebrations around the globe.

It is with stark clarity that this writer remembers the jubilation at Jamaica’s National Stadium. Clad in African-print, my sisters and I became part of the throng, singing, chanting and drumming in euphoric glee that this man had been freed from an unjust prison. For us, that moment in history was hope that anything was possible. Voices from the overflowing stadium swelled to envelope everything and everyone in the vicinity.

This was the mettle of the man whose very name continues to have the power to mobilize peoples of all creeds for one task or the next.

As history marches along, we who remain will continue to etch Mandela upon time’s tapestry. Through change and growth, through education and art, we will tell the story of the legend. Indeed the weaving has already begun.

Renowned American poet, Maya Angelou, hailed as one of the great voices of contemporary literature, has penned, “His Day Is Done” in tribute to Nelson Mandela “on behalf of the American people.”

It reads in part:

“His day is done.

The news came on the wings of a wind, reluctant to carry its burden.

… The news, expected and still unwelcome, reached us …

… and suddenly our world became somber.

“Yes, Mandela’s day is done, yet we, his inheritors, will open the gates

Wider for reconciliation, and we will respond generously to the cries of

Blacks and Whites, Asians, Hispanics, the poor who live piteously on the

floor of our planet.

“He has offered us understanding.

We will not withhold forgiveness even from those who do not ask.

Nelson Mandela’s day is done, we confess it in tearful voices, yet we lift

our own to say thank you.”

Those sentiments are echoed the world over. They are echoed in our own backyard.

Even before Madiba’s passing, Joan Pierre, Toronto’s Event Planner Extraordinaire and Consultant, who is also the President of the 28-year-old African Canadian Achievement Awards (ACAA), facilitated a visit to South Africa with a tour group through Integrity Tours.

Pierre says, she has wanted to visit South Africa for almost a decade. “It was my wish for my 60th birthday,” she says. “I’m not a loner when travelling, so I was always looking for someone to go with me, finally I took 30 people,” Pierre continues.

Less than two months before Mandela’s death, Pierre walked the streets of his home. “I guess, knowing what I know now, the timing was right – it was the perfect time to make the trip, so I can reflect on the experience and somewhat change my approach in my daily life,” says a gracious Pierre, who shared her experience with Pride News Magazine.

“Mandela’s influence on his people was evident and it’s my hope that it continues now that he is no longer with us. One can see very quickly how he is respected in Johannesburg, his name is everywhere. Mention his name and the smile that follows on the face of his people says it all.”

Pierre told us that they visited Mandela’s home twice so that they could, “soak in every moment.” As we can easily imagine, “it was silence on the coach, except for the clicking sounds of cameras, as we looked at the home that held one of the most powerful men on the planet.”

Just as Nelson Mandela was a multi-dimensional figure, so is his beloved South Africa. Pierre shares further: “We took to the Safari on our first day with a visit to Kruger National Park the following day. We were accustomed to seeing animals up close on movie and television screens, but we were now up close in real life, viewing lions, elephants, giraffes, zebras, alligators, water buffalos and many more.”

We are not naïve enough to assert that there is no more work to be done to foster growth in South Africa. Ms. Pierre reports: “This tour took us through all parts of Johannesburg, especially Soweto. In seeing what remained of the apartheid regime, it is clear that a lot still needs to be done in order to bring about the change that Mandela dreamed of for South Africa. It’s also evident that change is on its way, but I feel that it will take perhaps two decades to see real change.”

“Next stop, Cape Town! What a difference.” The Western looking city is often a culture shock to visitors. Again Mrs. Pierre shares: “I can look around and think I am in Canada, that’s how different it is from Johannesburg, but its beauty with mountains everywhere will take your breath away. Our visit to Table Mountain, with the magnificent views from the top, looking down at the city of Cape Town is one to experience.”

Though the trip provided breathtaking views and remarkable memories while conceivably creating some lasting friendships, it is doubtful that any singular experience will compare to the group’s visit to Mandela’s prison cell on Robben Island.

Pierre says that portion of the trip was, “far from magnificent.” With palpable emotion running raw, there was a deafening pregnant silence. “Words cannot describe the deep feelings,” says Pierre.

In the fashion that is the style of the legend Mandela, the trip’s mood quickly moved from bleak to bright. “The following day we took to the wine lands. It is said that South Africa has some of the best wines in the world. Though I am not a connoisseur, after 10 wine tasting samples, I suspect it is true – great wine.”

The message here is clear. We choose to embrace the spirit of our brother Nelson. Though faced with challenges, we stand resolute to survive. When the world expects tears, fear and hate, we will deliver laughter, courage and love.

Pierre says she hopes that what Mandela stood for as a man – that which inspired us all and to which he gave most of his life for the sake of his people – will continue to inspire South Africans to work towards a free society. She ends poignantly with a charge for us all. “Let us all continue to work towards his dream.”

Shall we stop the midday sun high in the sky in celebration of Madiba? Or do we release that great energy to spread warmth throughout the land? What will be our contribution to the legacy of Nelson Mandela?

Perhaps the man himself answered those questions for us while at the same time delivering his most appropriate requiem: “Death is something inevitable. When a man has done what he considers to be his duty to his people and his country, he can rest in peace. I believe I have made that effort and that is, therefore, why I will sleep for the eternity.”