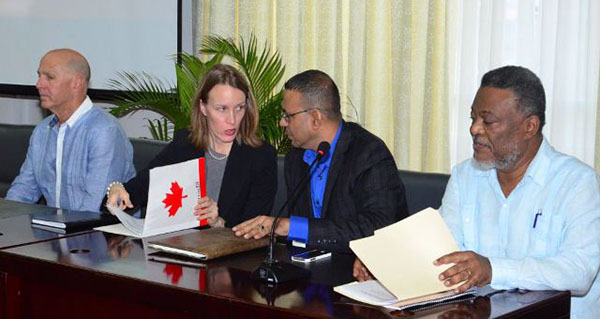 GEORGETOWN, Guyana – The Guyana government has welcomed the investment made by Aurora Gold Fields Mining Company, the second largest investment in the mining sector after that made by Omai Mining Company, and looks forward for the pouring of the first gold bar in the first quarter of 2015 when the company begins large scale production, Prime Minister Samuel Hinds said last week Wednesday.

Speaking at a media briefing of the company at the Guyana International Conference Centre, the Prime Minister, who was performing the duties of president, said, that as a country, “we have to open to the world…we have to partner with the world,” particularly given the potential size of the multi-million dollar investment.

Stakeholders at the Guyana Goldfields media briefing at the GICC

Prime Minister Hinds added that the experience, expertise and technologies which the investors are bringing into the country would have been difficult and time consuming to have been sourced locally. He said that the need for markets overseas to bring the necessary income needed to further develop Guyana, was also essential. “Our challenge is to develop partnerships with the world…we have to develop the ability to recognize who we could develop good partnerships with”.

He said, that the investment is somewhat risky, but he was looking forward to its success.

Minister of Natural Resources and the Environment, Robert Persaud, also welcomed the investment, which he said government fully supports. The need to keep all stakeholders was necessary, he noted to ensure “national buy-in” and give them an opportunity to offer advice. The project will be bringing tremendous benefits to the Guyanese people, he added.

He assured all stakeholders that Guyana Gold Fields has undertaken a comprehensive ESI and the necessary permits to ensure compliance with local laws and international best practices. The move by the company’s management team to reduce the “carbon footprint” of the site’s mining plant from 2,000 hectares to 1,200 hectares is recognition that they are conscious of their responsibilities, the minister said. The Environmental Protection Agency (EPA) and the Guyana Geology and Mines Commission’s Environmental Division will be upgrading their monitoring capability and enforcement capacity to manage and ensure compliance, Minister Persaud added.

“It is an area in which we have commenced work, especially given that we are looking at a new type of mining technology that will be utilized, and to ensure that from an environmental standpoint we build that capacity.”

Noting that gold declaration has set another record of in excess of 452,000 ounces versus 451,000 ounces target and the 438,000 ounces declared in 2012, the minister said that there is growth and further expansion in the sector. He said that it is against this background that renewed and enhanced attention to environmental and social responsibility will be given.

The hope was expressed that the company would inspire and support others to pursue sound environmental practices. He added that a broad based panel to examine various reform initiatives was needed. “If we are not up to-date, if we are not prepared, as it were for today’s challenges and opportunities, but also in the future, I think it will be severely lacking in terms of our part in fulfilling our responsibility.”

The issue of diversification was also mentioned by Minister Persaud, who said that as part of the process, creating an enabling environment to attract investments, whether local or foreign, was necessary. He added that it seems as if when every effort is made to attract some sort of investment to move development forward, there are elements in society who take it to mean there was a “sellout, buyout or give-out”. The minister stressed that Guyana would not be able to develop if incentives, in various forms, are not offered to enable the environment to attract potential investments that would enhance the nation’s development.

“Sometimes due to lack of information, and sometimes just out of political mischief, there are attempts to misrepresent the facts. Our government has made it absolutely clear that we are open for investment, local and foreign, we are not going to discriminate, but create the necessary arrangements and facilitation so that our resources can be developed in a sustainable way that brings tremendous benefits to our people”.

The Guyana government is keen to operate in a transparent manner, hence the move to join the Environmental Industry Transparency Initiative (EITI), and this is due to large companies such as Guyana Gold Fields and the prospective hydro-carbon sector, along with other resources, being developed, Minister Persaud said.

These and other sectors, he added, will only be developed for the benefit of all if done in a transparent manner. Mining, particularly, the minister said, has been a big factor in economic mobility, but it must be done in a sustainable and environmentally friendly manner to ensure benefits for the nation as a whole.

Recently appointed Canadian High Commissioner, Dr. Nicole Giles, in brief remarks, said, government and businesses, alike, recognize that resource development has the vast power to change the way a country lives adding that she was confident that this change would be positive for Guyana.

Guyana Gold Fields was described as a “model corporate citizen” by the High Commissioner. “The Guyana Gold Fields team has focused on exploring, building its infrastructure, and developing partnerships with communities and suppliers in preparation for the realization of production. Guyana Gold Fields has also invested heavily in developing Guyana’s human assets by training the local workforce to meet their growing demand for skilled labour. The Canadian Government, High Commissioner Giles said, has recognized the need to support its companies abroad, and along with the Canadian Development Agency (CIDA) and its Department of Foreign Affairs and International Trade, resources are brought together to accomplish this.

The collaboration with her government, the Guyana Education Ministry and the Technical and Vocational Education Training (TVET) Council which will result in a supply of skilled labour for various companies was cited as an example of what is possible when trade and development work together. She added that the Canadian Government stands ready to work with Guyana in promoting and protecting investments, as well as strengthening ties.

Guyana Gold Fields has been operating in Guyana since 1996, conducting explorations and surveys. It is expected to begin open pit mining within the next few months, then transition to underground mining. It is in the process of setting up prefab accommodation for 600 staffers initially. The prefab housing units have been imported and are being transported to the site along an access roadway built from a port facility at Buckhall on the Western bank of the Essequibo River. Up to 900 staffers will be employed, the majority of them Guyanese, during the period of 2013 to 2014 for the construction phase. Routine operations will see as many as 500 staffers being employed and according to company officials, up to 95% of the workforce will be local employees.

Medical schemes, health services and training in new technologies will be passed on to local staff along with leadership and managerial development skills. From its initial launch in 1996 to 2013, about US$192 million has been invested. The sum of US$249 million will be invested from 2013 to 2014, with US$153 million to be spent from 2015 to 2017. The mine is projected to be in operation until 2031. The total investment is being supported by a partnership with Sedgman Limited and Grana y Montero a joint venture company specializing in technology leadership and engineering.