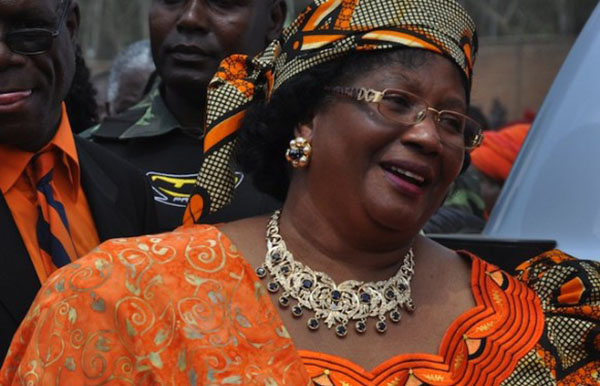 QUNU, South Africa (IPS) – As South Africa’s first Black president, Nelson Mandela, was laid to rest at his childhood home of Qunu in the Eastern Cape, Malawi’s President Joyce Banda told mourners that it was Mandela who taught her how to forgive those who tried to keep her from becoming southern Africa’s first female head of state.

Speaking at the funeral last Sunday, December 15, Banda said, she had been deeply moved by Mandela’s life before she had even met him. She told mourners that she had a moving conversation with the world’s most prominent statesman just months before she was to become president of Malawi in 2011.

Mandela died on December 5, after a long illness. He was 95 years old.

When Malawi’s President, Bingu wa Mutharika, died in April 2011, Banda, who had been named Mutharika’s running mate in 2009, had been expelled from the ruling Democratic Progressive Party and was isolated politically.

At the time of Mutharika’s death, she remained the country’s vice-president and his successor. However, some within Mutharika’s inner circle had attempted to delay announcing news of his passing to ensure that his brother, Peter, could take over the presidency. They failed.

“I had to forgive, but I had to forgive without any effort because my Madiba [Mandela’s clan name] had prepared me,” said Banda to wild applause from the audience.

Malawi’s director of information, Chikumbutso Mtumondzi, told IPS, after the speech, that Banda’s humility made her a champion of Malawi’s vulnerable.

“She has learnt a lot from watching and reading about Mandela’s leadership style and this is being seen in how she is working with her adversaries and helping the poor,” he said in a telephone interview.

“She demonstrated forgiveness by re-appointing the same ministers who plotted to stop her from ascending to power constitutionally following the death of President Mutharika. She is building houses for the poor and looks after so many disadvantaged children,” he said.

Banda took a personal pay cut of 30 percent and put her predecessor’s private jet up for sale after she came to power. She moved to restore donor confidence in Malawi by implementing an austerity budget, promising poverty reduction and justice for the disadvantaged.

But Banda, voted by Forbes magazine as Africa’s most influential woman, said she learned from Mandela’s example.

Banda, who is also chairperson of the Southern African Development Community (SADC), said that the region “will strive to emulate President Mandela’s stature and spirit so that his legacy can live on.”

“In the SADC region, we remember Tata [Mandela] as a great reformer who championed the cause of humanity, deepened democracy and dedicated his life to selfless service. A man who worked tirelessly to promote national, regional and world peace…. The ideals of political, social and economic emancipation that [he] stood for will inspire us forever as a region,” she promised.

“Humanity is better off because it had the good fortune of having Mandela…the champion of peace and justice and we pledge to continue with those ideals,” he said.

Mandela’s flag-draped casket left Pretoria on Saturday, December 14, after lying in state for three days. It was accompanied by a military guard of honour and was flown to Qunu after a solemn ceremony at the Waterkloof Airforce Base, organized by the ruling African National Congress (ANC).

Mandela, hailed for leading South Africa out of decades of apartheid, became the first icon from a line of famous South African anti-apartheid heroes like Chris Hani, Govan Mbeki and Steve Biko, all of whom were from the Eastern Cape, to be buried in his ancestral home.

Thousands of invited guests arrived at the rural village for Mandela’s burial. A dome-shaped marque, constructed for the ceremony, transformed the little village, which from now on will be known globally as Mandela’s final resting place.

Military jets and helicopters hovered in the skies and access to the compound, perched on a hilltop overlooking the traditional village homes, was restricted to family members, a few relatives and invited guests.

“He was the best thing that ever happened to South Africa,” said Gideon Nasilele, who was among the thousands who travelled to Qunu to pay their last respects to Mandela.

“He was a man of incomparable vision and a hero for so many of us…his death leaves a huge power vacuum in South Africa,” Nasilele told IPS.