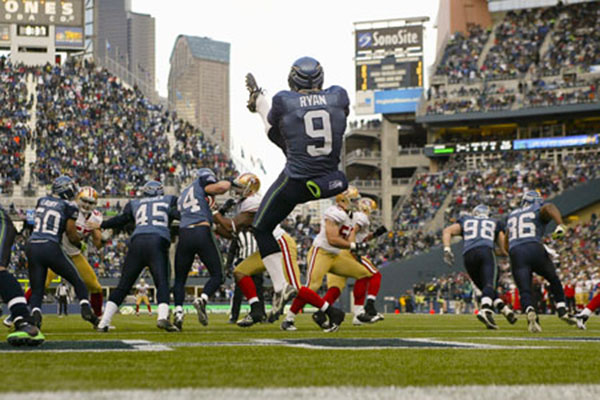 Three Canadians will be playing in the biggest game of their careers when the Broncos face the Seahawks in Super Bowl XLVIII. And one Canadian will be watching from the owner’s suite.

Orlando Franklin, an offensive tackle who honed his skills with the Ontario Varsity Football League’s Scarborough Thunder, will be playing in his first Super Bowl.

The 26-year-old Franklin, who at 6’7, 320-pounds serves as one of Peyton Manning’s main protectors on the Broncos’ offensive line, has started 47 of 48 games since the Broncos drafted him in 2011.

“This is 100% for Toronto,” Franklin told the Toronto Sun’s Mike Zeisberger after the Broncos 26-16 win over the New England Patriots in the AFC Championship game. “This is great. But we have one more step to take. . . . I can think of nothing better than to bring back a Super Bowl title up to Toronto.”

Franklin was born in the United States but moved to Toronto’s Scarborough neighbourhood at the age of three.

He still helps at-risk children in the area through the Orlando Franklin Foundation’s charitable work, and by giving speeches to kids in local schools.

Luke Willson, a Seattle Seahawks rookie from LaSalle, Ontario, will also have a chance to join the small group of Canadians with Super Bowl rings.

“When I grew up in Windsor, I didn’t think I’d be playing in a Super Bowl one day,” Willson told the Vancouver Sun’s Mike Beamish following Sunday’s 23-17 win over the San Francisco 49ers in the NFL championship game. “No. Probably not. It’s been such a journey. Coming out of Canada is tough. Getting a scholarship to Rice (University), getting drafted by the Seahawks, just trying to make the team and contributing. … It’s just kind of been a blur, in a way. It’s happened so fast. I feel truly blessed.”

In 16 regular-season games this season Willson caught 20 passes for 272 yards and a touchdown. The 6’5, 250-pound tight end was Seattle’s fifth round draft pick in 2013 (Rice University). Willson played both baseball and football at St. Thomas Villanova high school near Windsor. He even played on Canada’s national junior baseball team and was drafted by the Blue Jays, but chose to pursue football.

“I figured I was at least five years away from making the bigs in baseball,” the 24-year-old Willson told the Globe and Mail’s Gary Mason. “Meantime, I was going into my fifth year of college football after red-shirting my freshman year, and the NFL draft was about six months away. I just thought I’d really put in too much hard work not to see where football led me.”

“Luke has tremendous talent,” Carroll told the Globe and Mail’s Mason. “He has speed and strength and catching ability and range and all of that. At that spot (fifth round), that’s as good a pick as you could make . . . . When we had that pick at time it turned out to be a great opportunity and Luke has made that come to life.”

When the Seahawks defeated the San Francisco 49ers in the NFC Championship game Regina’s Jon Ryan became the first Saskatchewan native to have the chance to play in a Super Bowl.

Ryan, a punter, played football at Sheldon-Williams Collegiate in Regina and then at the University of Regina. He made the jump from the CFL to the NFL in 2006 and has been with Seattle since 2008.

Another Canadian with connections to Super Bowl XLVIII is Broncos owner Pat Bowlen.

With Denver’s victory over the Patriots the team heads to the Super Bowl for the sixth time under Bowlen’s ownership. No owner in NFL history has been a more frequent participant.

Bowlen was raised in Alberta and retains his Canadian citizenship. He was briefly a minority owner of the Calgary Flames, and once practiced law at Calgary firm Bennett Jones. Bowlen’s father, Paul, once ran for Canada in the Commonwealth Games and was the majority shareholder in Trans Prairie Pipelines.