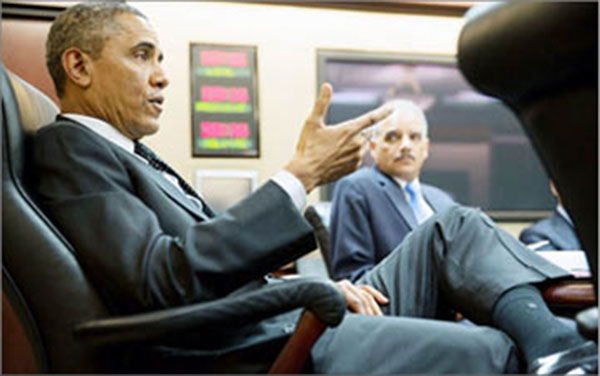 After weathering months of new disclosures and increasingly strident public criticism about the extent of U.S. spying, Obama, on Friday, recognized that the country’s National Security Agency (NSA) and other intelligence agencies may have overreached in the aftermath of the Sep. 11, 2001 attacks and the ongoing “war on terror”.

At the same time, Obama also stated that the particularly controversial bulk gathering of internet and phone records would remain in place.

“We have to make some important decisions about how to protect ourselves and sustain our leadership in the world, while upholding the civil liberties and privacy protections that our ideals and our Constitution require,” Obama said, last Friday.

The new directive will “strengthen executive branch oversight of [U.S.] intelligence activities … reform programs and procedures in place to provide greater transparency to our surveillance activities, and fortify the safeguards that protect the privacy of U.S. persons.”

In an unanticipated attempt to quell loud criticism from foreign governments and U.S. allies, Obama also introduced a series of changes aimed at protecting non-U.S. citizens abroad – the first time that a U.S. president has taken such steps.

“People around the world, regardless of their nationality, should know that the United States is not spying on ordinary people who don’t threaten our national security, and that we take their privacy concerns into account in our policies and procedures,” the president said.

“In this directive, I have taken the unprecedented step of extending certain protections that we have for the American people to people overseas [including] safeguards [that] will limit the duration that we can hold personal information, while also restricting the use of this information.”

In particular, the new directive seeks to ensure that “information about persons whose activities are not of foreign intelligence or counterintelligence value” will not be collected, “whatever their nationality and regardless of where they might reside.”

It is still unclear how exactly these protections will be implemented, but for now, the directive states that the United States will collect data only for the purposes of detecting espionage, cyber-crime, threats to U.S. or allied armed forces, and threats from terrorism, weapons proliferation and sanctions evasion.

Yet there remains wide disagreement about the soundness of extending constitutional protections to foreign nationals.

“Although I agree that we should be sensitive to foreign nationals, the question is whether they have equal protection under the Constitution,” Brian Michael Jenkins, a senior adviser at the RAND Corporation, a think tank here, told IPS. “And the answer is that they really don’t.”

Others note that although foreign nationals may not be protected under the U.S. Constitution, their privacy still needs to be respected as a broader human rights issue.

“It may be the case that foreigners overseas do not enjoy constitutional protections, but they do enjoy basic human rights,” Elizabeth Goitein, the co-director of the Liberty & National Security Program at the Brennan Centre for Justice at the New York University School of Law, told IPS. “And privacy is one of them.”

The president’s announcements comes in the midst of a historic public debate that first broke out in June when a former NSA contractor, Edward J. Snowden, publicized documents revealing the intrusiveness of U.S. intelligence gathering. And while many have welcomed Friday’s speech, the new reforms did little to quell all calls for action.

“The president took several steps toward reforming NSA surveillance, but there’s still a long way to go,” Cindy Cohn, the legal director of the Electronic Frontier Foundation (EFF), a digital-rights advocacy group, said following the president’s speech. “Other necessary reforms include requiring prior judicial review of national security letters and ensuring the security and encryption of our digital tools, but the president’s speech made no mention of these.”

Others expressed disappointment at the president’s decision to simply reform, but not eliminate, the government’s bulk collection of telephone records, also known as metadata.

“The president should stop bulk collection, approach Congress and support the USA Freedom ACT,” the Brennan Center’s Goitein says, referring to a legislative proposal that, if approved, would substantially rein in the NSA’s activities through an official act of Congress.

The president did note on Friday that he would include Congress in the new overhaul, either by asking legislators to codify the new changes or by ensuring that lawmakers were part of a rigorous oversight mechanism.

However, Goitein warns that Congress should be included only if this will lead to actual reforms, and not as a way to avoid progress.

“The president should go to Congress to tighten the law and to ensure that no other administration will do this in the future,” she says, noting that if the president had really wanted to end bulk collection, he could have done so during Friday’s speech.

Obama also noted that the bulk collection of telephone records would be substituted by an alternative mechanism, although the details of this remain unclear. The president proposed a two-stepped transition that would initially see a more limited surveillance of phone calls, one that would “pursue phone calls that are two steps removed from a number associated with a terrorist organization, instead of the current three.”

During this initial period, the attorney-general and the rest of the intelligence community will look for an alternative mechanism to replace the NSA’s storage mechanism. It is still unclear whether this will be a single third party conducting the government’s surveillance or a group of private companies and contractors.

Ultimately, Friday’s speech was a notably public look at some of the United States’ most highly classified programs, highlighting an already startling distance from the days prior to Snowden’s leaks.

“Intelligence collection is always a delicate business in a democracy, and it should be,” the RAND’s Jenkins told IPS. “Public debate and argument is the only way we have of achieving something that will be more or less acceptable to the public and that will provide the protection to our civil liberties.”