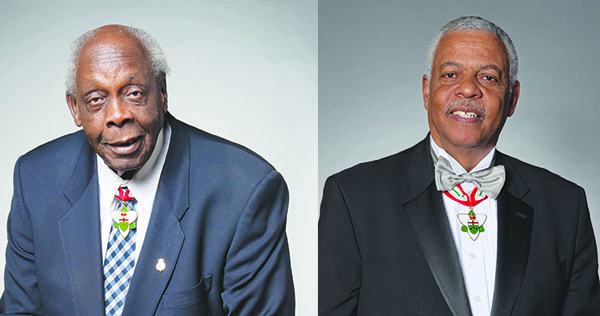 Two Black Canadians who created some “firsts” in their careers are among 25 extraordinary Ontarians appointed to the Order of Ontario, the province’s highest official honour.

George E. Carter, one of Canada’s first Black lawyers and the first Canadian-born Black judge, and Alvin Curling, first Black Canadian to hold a Cabinet position in Ontario and later the first Black Speaker of the Ontario Legislature were invested with the Order of Ontario by David C. Onley, Lieutenant Governor of Ontario, at a ceremony held on January 23 at Queen’s Park.

“Carter worked to change discriminatory practices in Ontario’s criminal justice system and was instrumental in the development of Legal Aid in Ontario as well as many of the human rights laws that protect us today,” a press release noted.

Curling, now strategic advisor to the Minister of Children and Youth Services, served as Canada’s ambassador to the Dominican Republic and has played an important role in shaping government policy addressing youth violence.

“Our province is richer for the contributions of these distinguished individuals. Through drive and determination they have pushed boundaries and serve as truly outstanding examples for all Ontarians,” Onley said.

Born in Toronto in 1921, the retired judge is the first of 14 children of John Carter and Louise Braithwaite Carter, who were from Barbados.

His parents taught them the value of education and achievement. He was an outstanding student from a struggling West Indian family in the Depression era and also excelled in sports as a cricket player.

“There were mainly West Indians here from 1920, after the war, and every family that you spoke to in regard to education you could guarantee there was a West Indian background. They always insisted on that. You could tell somebody from other parts of Canada, they weren’t too interested,” Judge Carter said, noting that West Indians played a great part here in the quest of education.

Judge Carter was inspired by speakers such as Marcus Garvey, Paul Robeson and A. Phillip Randolph who visited the Universal Negro Improvement Association (UNIA), a centre for Toronto’s black community in the 1930s.

“I’m very pleased about it [Order of Ontario]. Ontario, of course, is my home and I’m very, very Canadian. I’m more Ontario than I’m Canadian I guess,” Carter said, noting that even when he is traveling out west, working in the summers, he always made sure that he told people he was from Ontario, even if they called it Hogtown.

“I love this country very, very much and I’m so happy that it’s opening up for so many of us. I think our women are doing terrific across this country. I remember the days when it wasn’t so,” said the former president and dean of law at the University of Saskatchewan.

In 1944, he received his B.A. from Trinity College, University of Toronto and went into the Canadian army. After his military service, he went on to Osgoode Hall from 1945-48 to study law.

While in school, Carter worked as a porter on the trains because that was the only job available for most black men at the time.

He articled with the only black lawyer practicing in Ontario, B.J. Spencer Pitt, before opening his own firm in Toronto in 1952.

He practiced in the areas of real estate, criminal and family law for 31 years until he was appointed an Ontario provincial court judge in 1979.

Judge Carter was also instrumental in the formation of the Adoption of Coloured Children agency.

A television documentary, “The Making Of A Judge,” hosted by his daughter, actress and model Linda V. Carter, was made about his accomplishments in 2010.

“My whole family is very proud of dad’s honour, and really pleased that he was able to enjoy the evening with us. He has worked for decades to help his people and continues to do so today even in his 93rd year,” she said about the significant event.

Curling, whose name has been immortalized on a street sign and school, said that he is quite honoured and humbled by being recognized by the province with the Order of Ontario.

“You feel rather humbled about it and on the other hand, you wonder, what did I really do? These are things that I’ve been doing that I like and enjoy. Here is the province that says we want to honour you for this excellence and what have you,” he said.

He said the appointment came as a surprise because in the past, as Speaker of the Ontario Legislature, he was a part of the committee that selected Ontarians for appointments and awards.

Now he is on the other side being a recipient of the investiture.

Curling was first elected to the Ontario Legislature on May 2, 1985, representing the Scarborough-Rouge River riding.

He was re-elected in five provincial elections and between 1985 and 1990, served as Minister of Housing and Minister of Skills Development with special responsibility for literacy.

The veteran politician was also a member of the Premier’s Council on Science and Technology and served as the parliamentary assistant to the Minister of Intergovernmental Affairs and to the Premier of Ontario.

Curling was elected Speaker of the legislature on November 19, 2003, becoming the first black person to do so.

While in opposition, he served as Deputy Opposition House Leader, Deputy Whip and critic for Training and Skills Development, Solicitor General, Human Rights and Colleges and Universities.

On August 19, 2005, he resigned his seat as to accept a diplomatic posting as Canada’s ambassador to the Dominican Republic.

A former president of World Literacy of Canada, Curling was educated at the University of Technology in Jamaica, Seneca College and York University in Toronto.

He began working as an educator in 1972 and has been a lifetime member of the Jamaican Canadian Association.

The appointees to Ontario’s highest honour were chosen for their contributions to the arts, law, science, medicine, history, politics, and philanthropy.

They were presented with the Order of Ontario insignia and receive a certificate and a lapel pin.

The Order of Ontario, the province’s highest official honour, was created in 1986 and recognizes the highest level of individual excellence and achievement in any field.

Nominations are made by members of the public and any resident or former long-term resident of Ontario can be nominated.