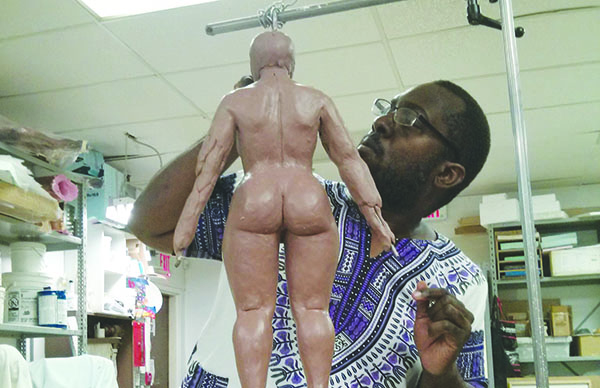 TORONTO, Ontario – Sculptor Frantz Brent-Harris’ interest in dolls was sparked when his mother fell ill and lost weight to the point of being only 90 pounds. The family feared that she would die, however, she survived and during this very stressful time he was walking by a Goodwill store and saw a naked black Barbie doll.

The Jamaica-born artist had never seen one before so he decided to buy the doll and make a dress for it.

“It was a very weird thing for me to do but it just popped into my head to do that. I had so much fun making the dress that I started collecting dolls, making outfits for them. My collection grew but I wanted a certain particular doll. I wanted a doll that kind of represented what I consider a beautiful black woman and it wasn’t there because the bodies were very skinny, they were very Eurocentric,” Brent-Harris said.

Five years ago, he went to the Al Green Sculpture Studio School in Toronto in search of someone who could sculpt this doll for him. He was told that the studio does not take commissions but he should try to sculpt it himself.

Brent-Harris signed up for one month, still hoping that he would find someone to do it for him, but on his first day he sculpted a head and realized that he had a natural talent for sculpture.

From then on he has been creating dolls himself and has a new exhibition, “Elusive Icons: Black Fashion Dolls 1968-2013,” that will make its debut at the TD Then & Now Black History Month Series 2014 which is curated by Black Artists’ Network Dialogue (BAND).

The exhibition is a chronological visual illustration and comparison of black fashion dolls over the past 46 years. The collection of over 60 dolls shows the progression of black representation and the evolution of blackness.

“I was looking at how representations of black people change over the years, and particularly in how we were represented by black fashion dolls,” says Brent-Harris, standing beside two of his dolls inside the Gladstone Hotel in the west end of Toronto at a launch reception hosted by BAND on January 30.

Brent-Harris said in 1967 there was only one black fashion doll, a Black Francie Doll, made by Mattel toy company, which was “a black version of a white doll, so it was basically a white doll painted brown.”

The online Fashion Doll Guide notes that a Black Francie Doll is the name collectors call the African American Francie that was introduced in 1967. They were not made in great numbers and as a result are very rare and hard to find today.

Now there are many different types of black dolls and they are not just being made by Mattel but by other manufacturers too.

“It kind of speaks to the fact that black people have come to be an economic force that has to be recognized. We are buying what represents us for our children. That’s what interested me in doing this particular exhibition,” Brent-Harris said.

He said there are several but they are hard to find. But if someone really wants one, he advises that they take the extra effort try to find it, and if they can’t find any, they should write Mattel, which would sell them one.

“You can’t just go to Walmart and find a black doll sometimes. Sometimes you can, but I think its also important if you have a black child to give them toys which represent themselves,” he said.

Brent-Harris said his dolls represent normal body black women, noting that people refer to the dolls as full figured but they’re not.

“This is a woman that eats properly, has her exercise and takes care of herself. By no means is she full figured. This is what a normal body would look like, but because we are trained to think that when we see a body represented, you always see a very ultra slim body, which is not a normal body, you kind of react to mine as full figured but they’re not, they’re normal body,” he said.

The sculptor said a woman attending the reception cried upon seeing a doll that is closer to how she looks than what she grew up seeing in dolls.

It took him two and a half years to complete the first sculpture because it needed a high level finish and it was also a very steep learning curve for him.

The doll-making process involves him making a clay original, from this he makes a mould cast in another cast, which is then refined to make another mould.

From this he makes a skeleton out of rods and then pours liquid silicone that he has coloured with pigment into the mould, heat is applied and then it sits for a day and a half.

When the sculptor pulls it out, he then starts the process of making the costumes, working from a sketch and sometimes taking months to figure out the design.