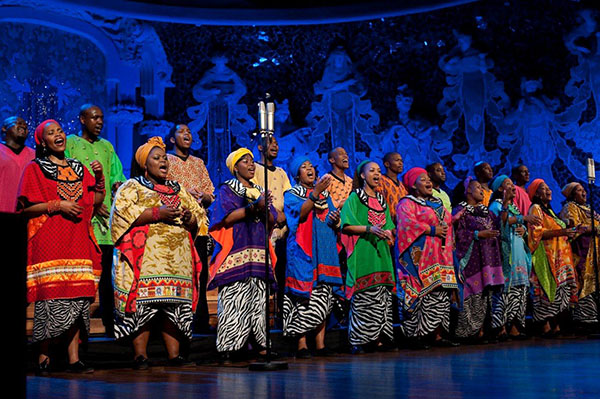 TORONTO, Ontario – In celebration of Black History Month, the Sony Centre For The Performing Arts — which has played a defining role in the cultural life of Toronto for more than 50 years — is presenting the Soweto Gospel Choir, South Africa’s internationally renowned and award-winning choir, for one performance only, on Friday, February 21, at 7:30pm.

The choir will perform selections from its just-released sixth album, “Divine Decade”, as part of its 2014 World tour, marking 10 years in music.

The group performed at the first of the 46664 concerts in the early 2000s, a series of AIDS charity concerts played in honour of Nelson Mandela, and has since toured internationally several times.

It all started in Australia in 2003 with the choir’s first ever ticketed performance in Melbourne, where the country’s Herald Sun newspaper described its performance as “Sheer jubilation … earthy and unrestrained … the rhythm of life”.

Since that day, the Soweto Gospel Choir has gone from completely unknown to being heralded around the world as one of the great vocal ensembles. It has been an incredible journey from the streets of Soweto to the world’s most prestigious venues.

Along the way they have won two Grammys, an Emmy and an Oscar nomination and have just released their sixth album, “Divine Decade”.

The choir’s first album, “Voices of Heaven”, went to Number 1 on the Billboard World Music chart within three weeks of its release. It won its first Grammy in 2007, Best Traditional World Music, for their second CD, “Blessed”, and again in 2008 for “African Spirit”.

In 2009 the Soweto Gospel Choir — whose lively, animated concert performance the Montreal Gazette portrayed as, “It was easy to imagine that God himself was snapping his fingers” — performed its Oscar-nominated “Down to Earth,” with Peter Gabriel, on the Academy Awards broadcast, the first South African artist to ever do so.

The choir continues to inspire individuals thorough their powerful gospel music and high involvement in international charities – including their own AIDS orphans foundation, Nkosi’s Haven Vukani – for which they have raised in total, almost $1,500,000.00 USD.

Ticket prices to the choir’s one-performance-only concert range from $55 to $75 (plus applicable fees) and can be purchased in person at the Sony Centre Box Office, by phone at 1-855-872-7669 or online at www.sonycentre.ca.