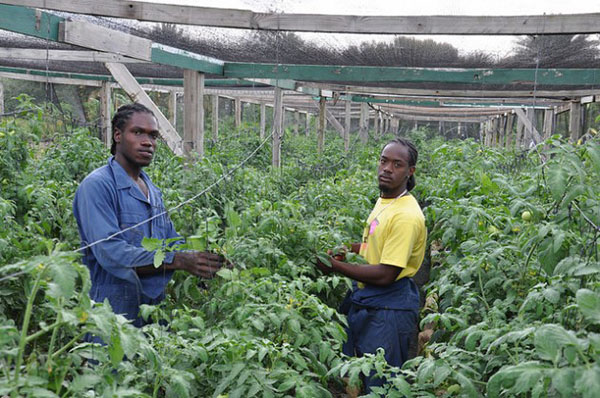 JONAS ROAD, Antigua (IPS) – Antigua is one of the most drought-prone countries in the Caribbean. So whenever it rains, the inhabitants generally regard the weather as “showers of blessing”.

But that is starting to change. Many farmers now see the rains as a curse and are now fighting an uphill battle to save their crops, vital for both the local and foreign markets.

“We are a drought-prone country,” Ruleta Camacho, senior environmental officer in the ministry of agriculture, told IPS. “The issue now is that due to the impact of climate change, we are having exacerbated drought and exacerbated rainfall events.”

Heavy rainfall can damage crops and high humidity brings with it an infestation of pests and diseases, increasing the consumption of pesticides.

“We are having large amounts of rain in very short times. There are a number of communities that are affected by flood conditions, communities where the livelihoods of the population could be affected,” Camacho added.

One such community is Jonas Road where Delrie Cole has been farming for the last three years. But since Cole introduced greenhouse technology to his farm, he is no longer at the mercy of the rains.

With the greenhouses he is also able to grow his vegetables – cilantro, parsley, basil, peppers, eggplant, lettuce, pumpkins and tomatoes – during periods of drought or deluge.

“The need for the greenhouses came about because of climate change and a lack of production in the summer season when you have more stressful conditions,” he told IPS.

“Due to the changing climate we are having hotter summers and it’s a pretty difficult time when you have the plants being stressed and the fruits are falling from the trees.

“The greenhouse basically gives you that edge where you can better operate in terms of control, cutting down some of the humidity that you would have during the summer,” he explained.

Greenhouse farming, which is cultivation of plants inside a building with glass walls and roof under controlled condition, has become necessary with climate change.

In the greenhouses, which generally have transparent plastic roofs and walls, temperature and humidity can be controlled, making it possible for farmers to grow crops year-round.

“The yield and lifespan basically are three times as much as open-field production,” said Cole, who has been a farmer for more than 30 years.

“We are doing crops which are running 12 months, so whereas you would have planted a field that is carrying us through 12 months, farmers in the open would have been planting three crops within that same length of time and their yield would be less.”

Farmers in Antigua stand to benefit from the Reducing the Risks to Human and Natural Assets Resulting from Climate Change (RRACC) project being implemented by the Organization of Eastern Caribbean States (OECS) in partnership with the United States Agency for International Development (USAID).

“The ministry of agriculture has identified the threat of heavy rainfall on cash crops such as lettuce and tomatoes,” Susanna Scott, coordinator of the RRACC project, told IPS.

“A lot of damage could result from intense rainfall, which is expected to increase with climate change and also in time of drought the impact of the dry weather on these crops is severe as well,” she said. “So what we are looking at doing is investing in greenhouses to provide a protective area for crop growing.”

Antigua’s main agricultural exports include cotton to Japan and fruits and vegetables to other Caribbean territories.

Hot peppers and vegetables are also exported to the United Kingdom and Canada. Other agriculture products are bananas, coconuts, cucumbers, mangoes, livestock and pineapples.

Agriculture is currently a rather insignificant part of the economy, making up just four percent of GDP. However, it appears that cultivation is on the rise, with approximately 300 acres of land planted with vegetables.

Antigua has also been campaigning to encourage more youth to get involved in agriculture and there is evidence of some success.

Oraine Halstead and Rhys Actie, who are both under the age of 25, are full-time farmers.

“As a boy growing up with my grandmother, she was involved in planting vegetables and I got a little knowledge of it and fell in love with it,” Actie, a national of St. Lucia who moved here at the age of nine years and is now 23, told IPS.

Halstead, who has been a farmer for two and half years, said farming is a very fulfilling career.

“I love to be around plants, taking care of them. It’s a joy to see them grow to maturity and the food they produce,” he told IPS.

In the wake of climate change, greenhouse farming is seen as the only way to protect crops and manage a better yield than in normal conditions. Farming under controlled condition protects crops from wind, rain, sun and precipitation.

The advantages of vegetable production in tropical greenhouses include higher yield and quality; reduced risks for quality and yield; less susceptibility to disease and damage caused by heavy rainfall; extended harvest time; reduced water consumption; and better use of fertilizer and pesticides.

“People are more keen as to what they consume and where it’s coming from. We are doing vine ripening so the flavour is good. Consumers are knocking on our doors because of the quality and the taste of our tomatoes,” Cole told IPS.