TORONTO, Ontario – The theme of community was constantly heard throughout the evening at the 29th annual African Canadian Achievement Awards (ACAA) held at the St. Lawrence Centre for the Arts in Toronto on the weekend.

Yahaya Baruwa, the son of Nigerian parents and recipient of the youth achievement award, acknowledged that he was standing on the shoulders of giants.

Jamaica-born Camille Orridge who received an award for excellence in medicine saluted the lineage of strong black women who dared to survive.

She said their/our work is not done and called for more equity inside and outside of Black Canadian communities.

“Your recognition is deeply appreciated, but this award belongs not just to me, but to a long line of black women who have worked, rebelled, sacrificed, found joy in small things and laughed loud and proud in the face of adversity. These women like my 90 year old Aunt Ber, my late mother Lillian Orridge and teachers, Pamela Mordecai and Winifred Smith, made it possible for me to be here unbent by racism, sexism, homophobia and classism to accept this award as a proud single mother, lesbian and community worker. These women, my family and my friends make it possible for me to bring all of who I am to work in service of my communities and I thank you for honouring what they inspire,” she said.

The CEO of the Toronto Central Local Health Integration Network said discrimination and the obstacles it brings still persist.

“Let us not dishonour the sacrifices of those upon whose shoulders we stand by thinking that our work is done. Instead, let us remain vigilant in using the spirit in this gathering and our collective achievements to work for more equity inside and outside our African Canadian communities. Let our ongoing efforts be guided by these words by our poet Claude McKay, ‘Idealism is like a castle in the air – if it is not based on a solid foundation of social and political realism.’” 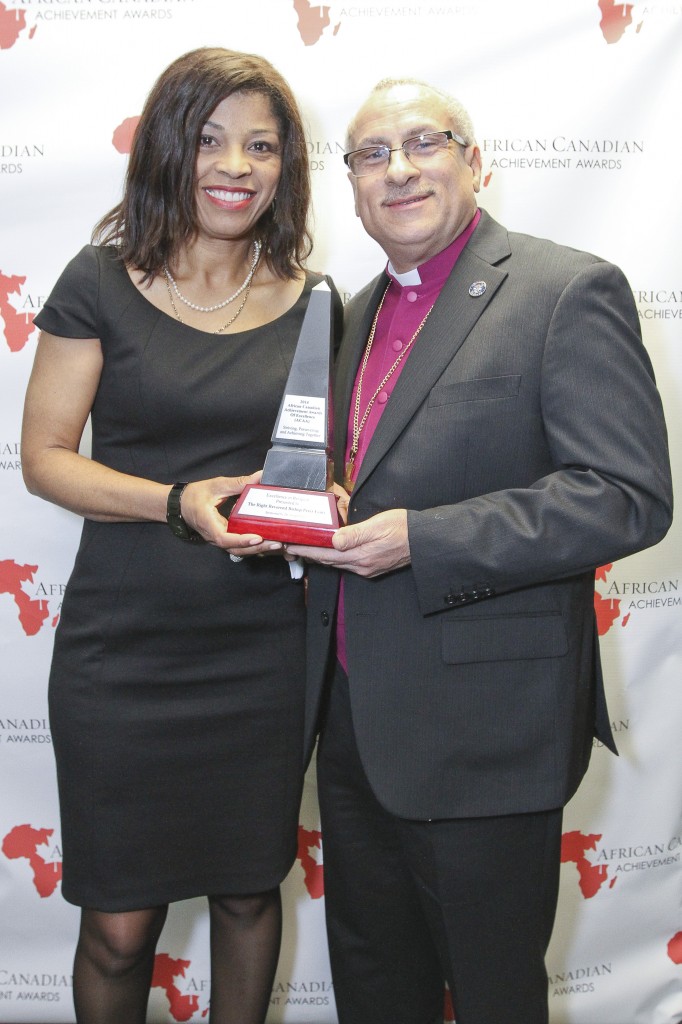 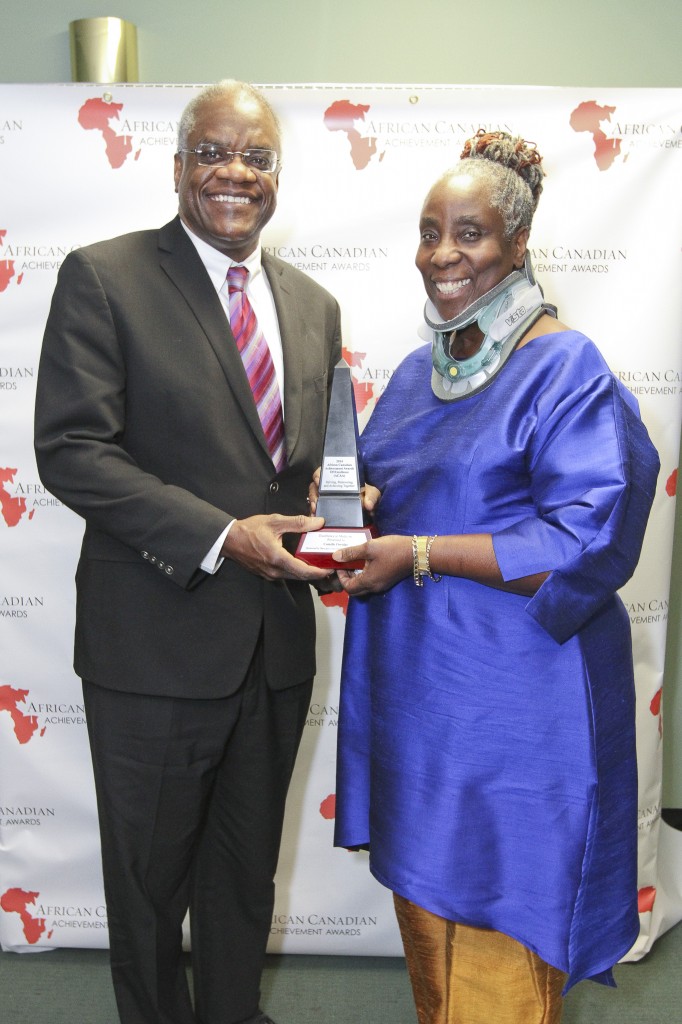 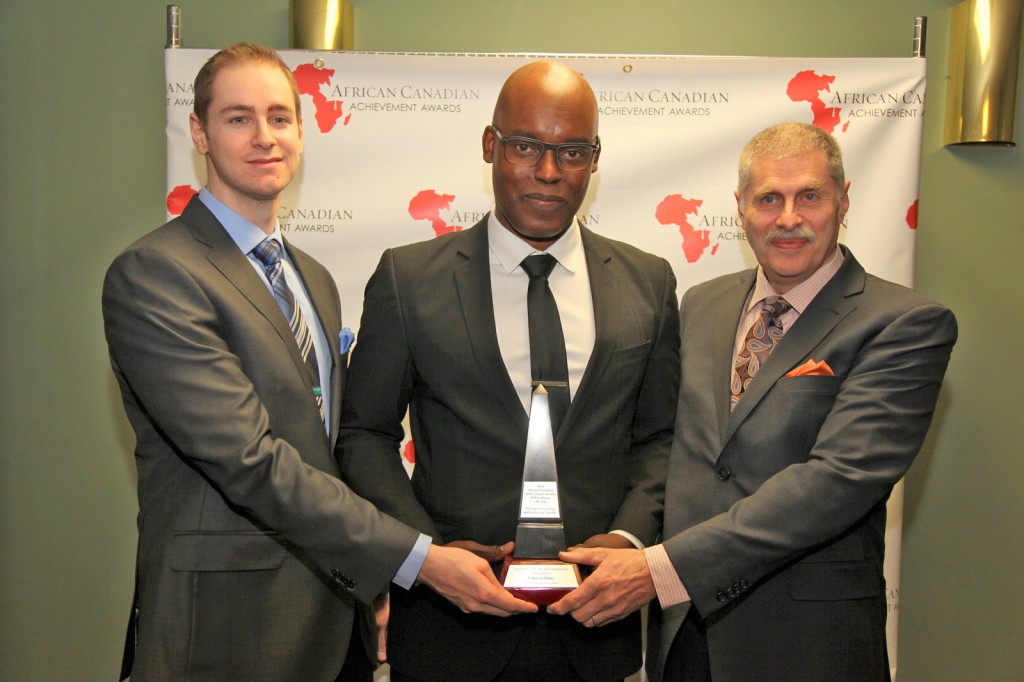 Dr. Elizabeth Sinclair-Artwell, an educator, referred to the power of images of black people in different roles in society.

That’s what the recipient of the excellence in education award saw when she was sent back to St. Kitts-Nevis, where she was born, from England where she migrated because she was not engaged at school.

Her eyes were opened and perspective widened when she saw black people in so many influential roles around her. She returned to England with a resolve to excel as an educator.

Sinclair-Artwell paid tribute to her 95-year-old mother who was in the audience and who earlier that day had told her that she was proud of all she had achieved.

Baruwa, Orridge and Sinclair-Artwell were among the 16 individuals who received African Canadian Achievement Awards on February 22 inside the Jane Mallet Theatre.

The prestigious annual awards presentation celebrates the achievements and pays tribute to the exemplary contributions of African Canadians to their community and the wider community. 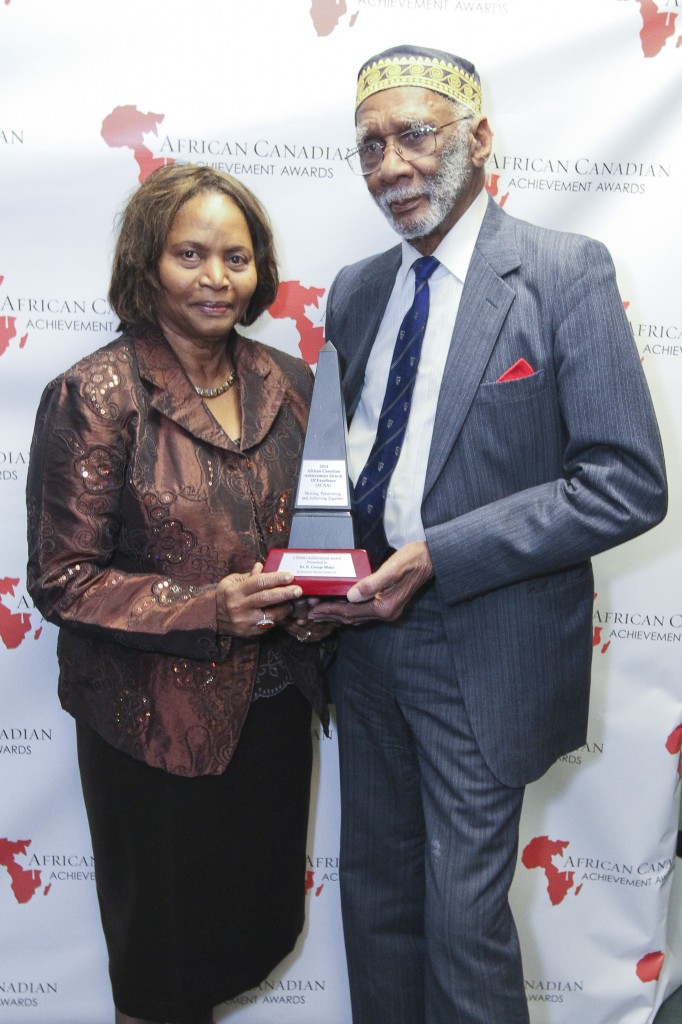 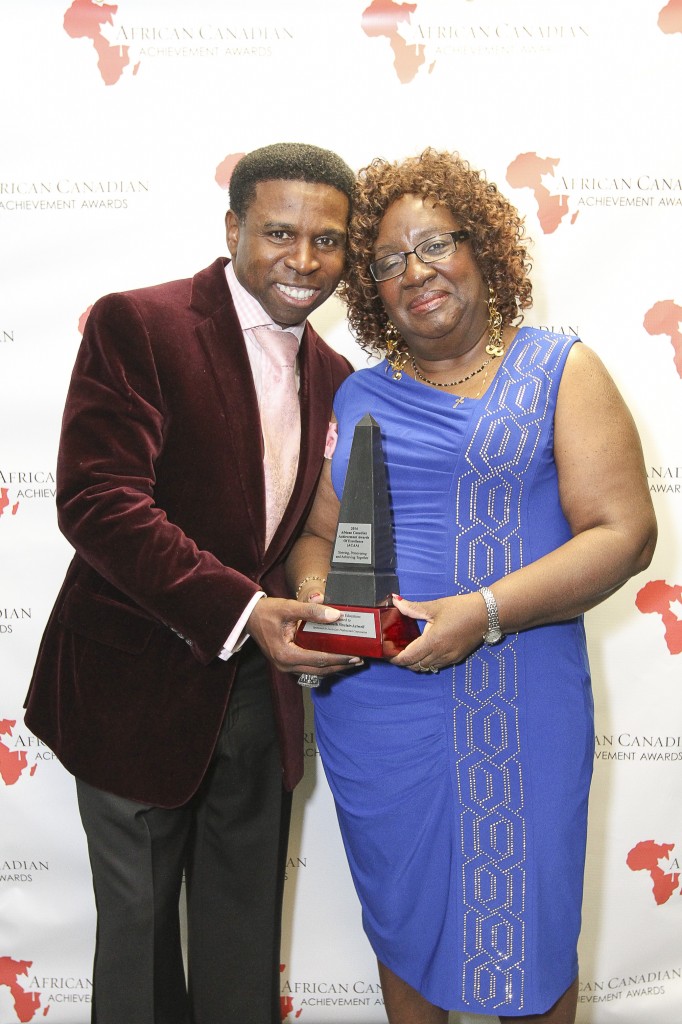 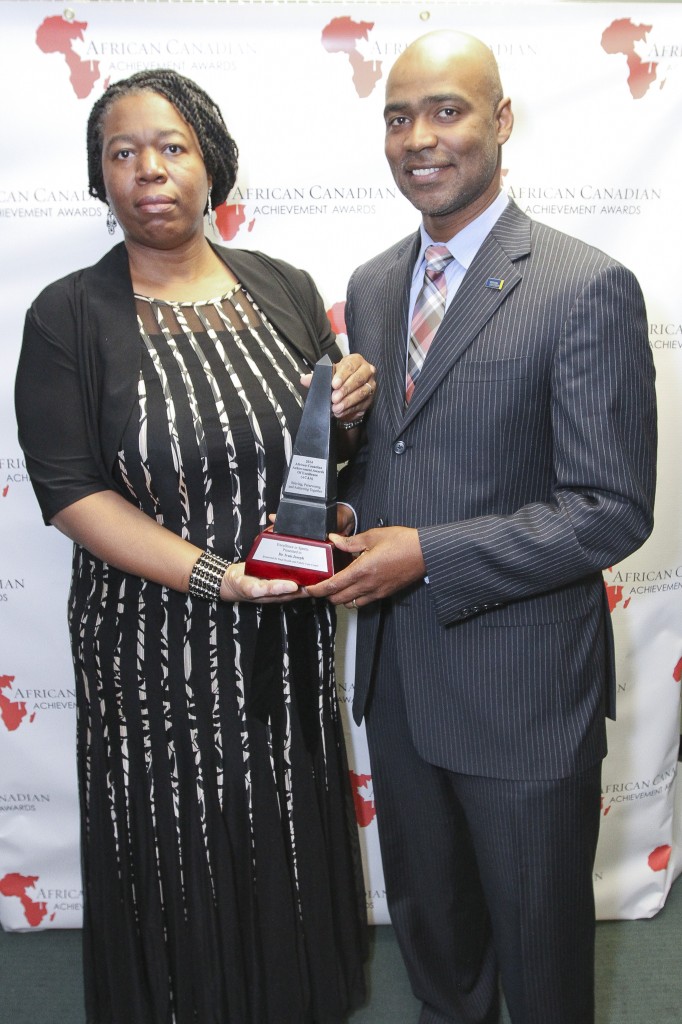 Bailey, artistic director of the Toronto International Film Festival, is responsible for the overall vision and execution of festival programming, as well as maintaining relationships with Canadian and international film industries.

Born to Barbadian parents in London, England, Bailey spent his formative years in England and Barbados before migrating to Canada.

He was a festival programmer at TIFF for eleven years, headed its Perspective Canada program and founded its Planet Africa section, which ran from 1995-2004.

Kirton, a former banking executive and president of the Barbados Ball Canada Aid, has been involved with the not-for-profit organization since it was formed in 2003.

The organization supports charitable causes in the interest of Barbadians in Canada and Barbados with a focus on scholarships for youth and donations to healthcare.

Sadu, an entrepreneur and community-builder, utilizes creativity, leadership and teamwork to build infrastructure and legacy in communities.

She spoke of the importance of dissecting the word “community” into “comm” and “unity” to understand the necessity to come together to achieve unity. 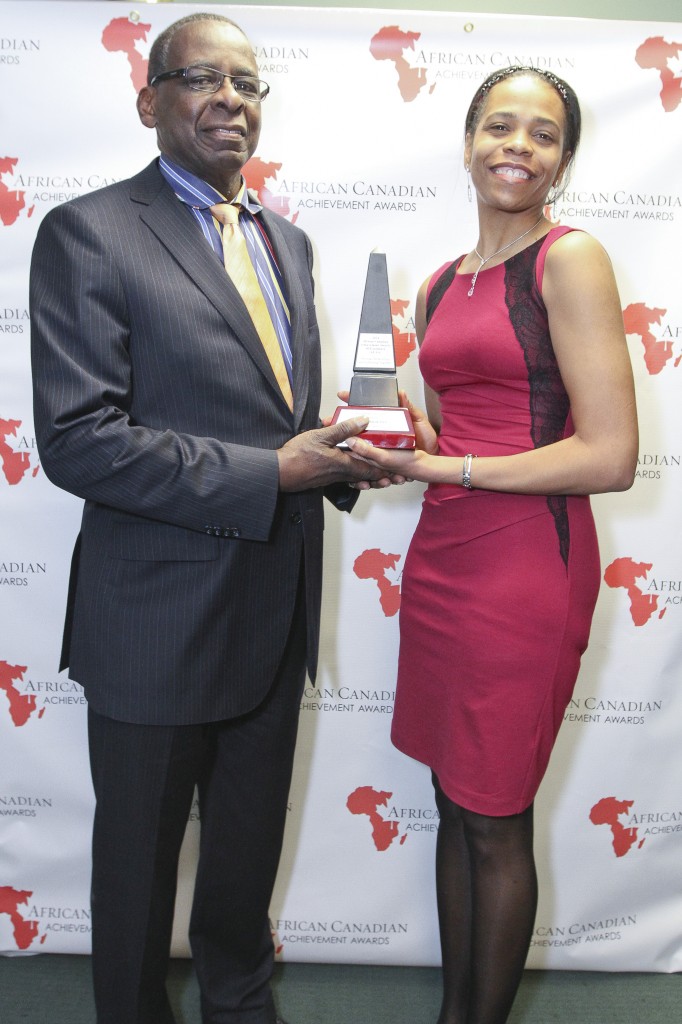 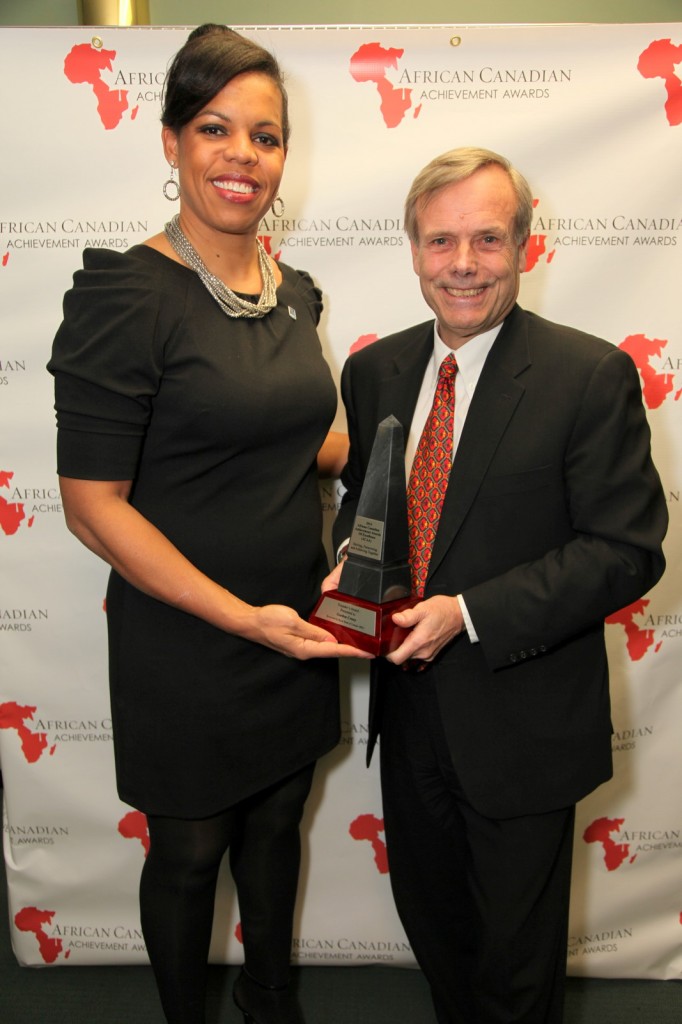 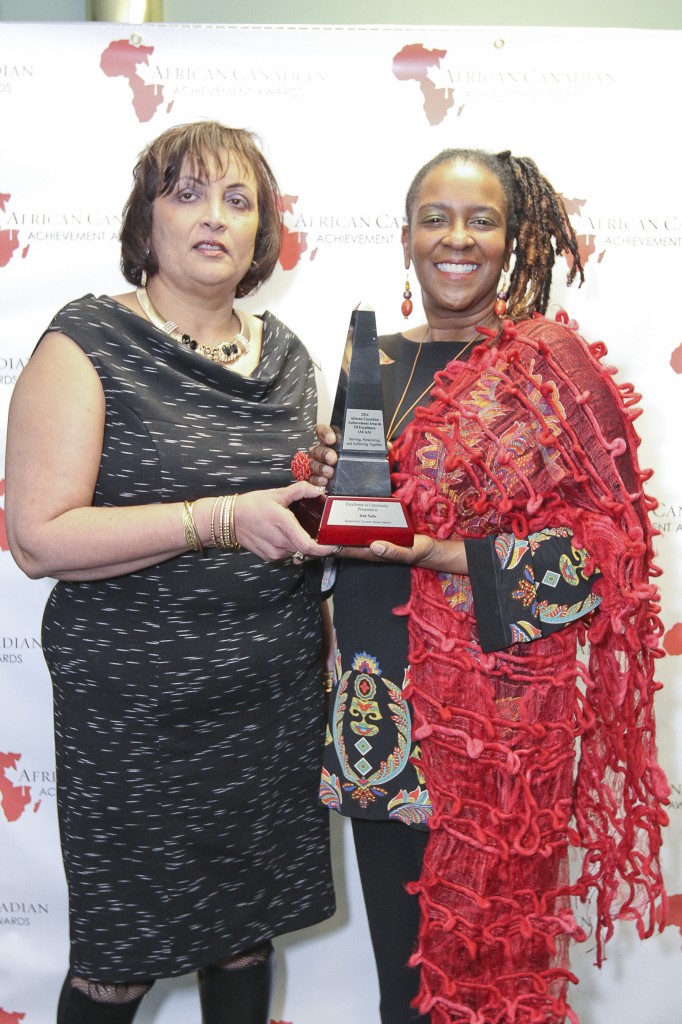 A co-owner of A Different Booklist bookstore with her husband, Miguel San Vincente, Sadu is the founder of the Walk with Excellence for schools in Toronto and founding member of the annual Underground Freedom Ride in celebration of Emancipation Day.

Justice Barnes, a Ghanaian, was called to the bar in 1993 and at the age of 39 became one of Canada’s youngest judges.

Justice Barnes has particular expertise in integrating legal case processing with therapeutic approaches to address antisocial or criminal behavior, where such behavior is due to underlying causes such as mental illness, alcohol or drug abuse.

Davis, an accomplished journalist and writer, is the manager of program development at CBC Radio.

Born in Jamaica, he migrated to Montreal, Canada in 1967 and soon found out that he and his siblings were the only black children in their neighbourhood. The racism there was overt and the family’s move to Mississauga was a welcomed reprieve for him.

Davis has worked in radio, television and print for 26 years, covering everything from current affairs to the arts. For the past 16 years, he has worked at CBC as a reporter and producer, and was senior producer for Metro Morning where he was part of the team that developed the program into the number one morning radio show in Toronto.

White ran as a candidate in five political campaigns all three levels of government: municipal, provincial and federal.

She has spent 30 years in communications, media and politics as an advisor to municipal and provincial leaders, including NDP leaders, Howard Hampton and Andrea Horwath, and Mel Lastman, former mayor of North York.

A former news reporter, White is the president of WORDS Media & Communications Inc. and hails from a long lineage of accomplished African Canadians.

Fenty, a Barbadian, was ordained a bishop in St. James Cathedral of the Anglican Diocese of Toronto on June 22, 2013, becoming the first bishop of African descent within the Anglican Church of Canada.

Although having many ecumenical responsibilities, Bishop Fenty is very involved in the communities in which he ministers and is a strong advocate for social justice, human rights and ecumenism. 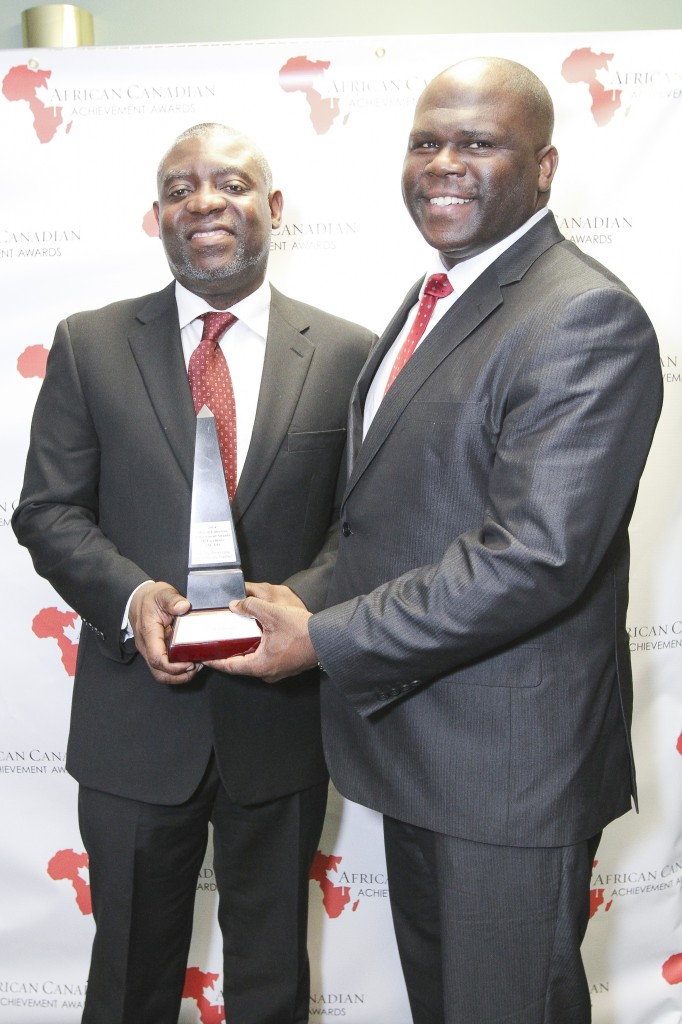 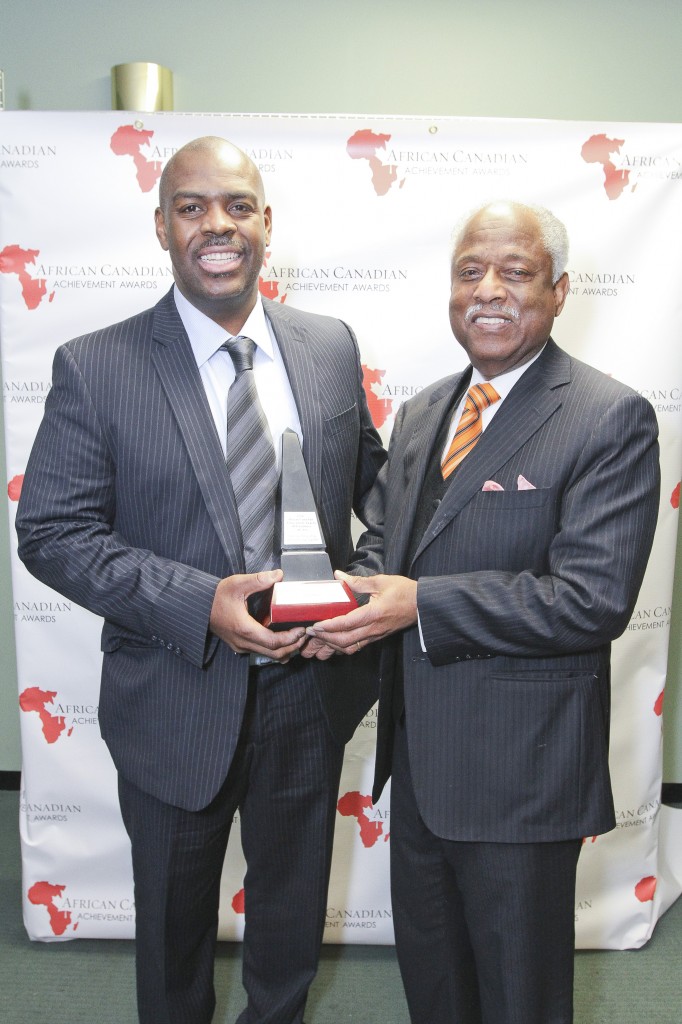 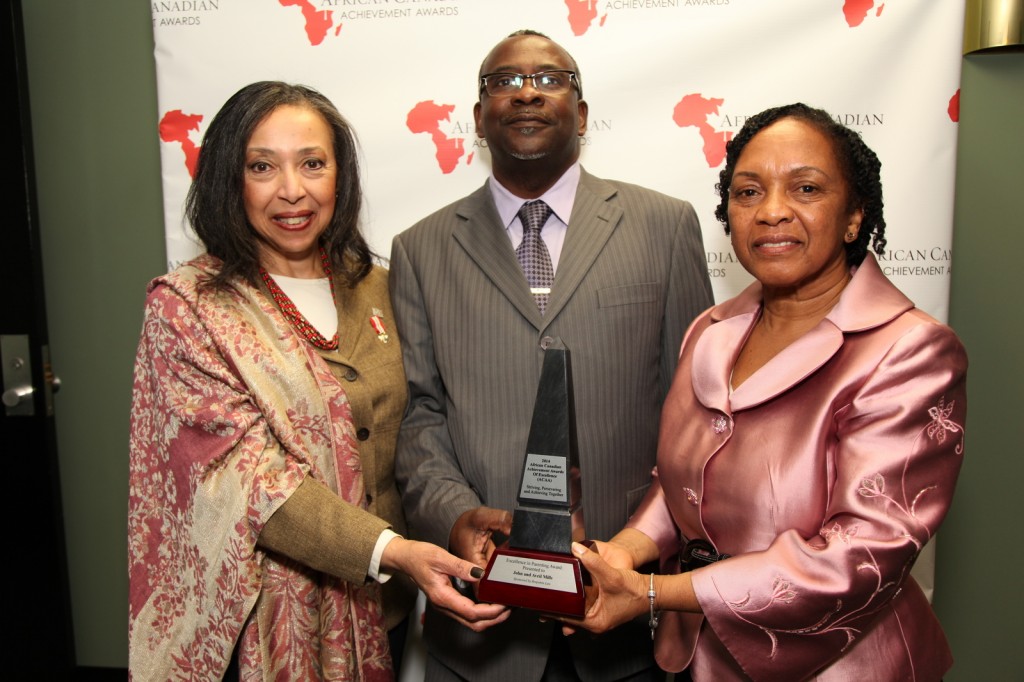 Dr. Smith, a professor of neuroscience in the psychology department at Carleton University, is actively involved in youth outreach programs to encourage and inspire young Canadians to pursue careers in science.

The Jamaica-born scientist was awarded a Canadian Institutes of Health Research (CIHR) post-doctoral fellowship at Harvard Medical School in 2005 to carry out her research on the repair of the nervous system by targeting nerve regeneration.

She started an independent research laboratory in 2008 to focus on understanding how the brain responds to injury and disease and identifying innovative approaches to promote repair and recovery.

Dr. Joseph, director of athletics at Ryerson University, is guiding the transformation of the Ryerson Rams athletic department, improving team performance, while at the same time, raising the academic average of athletes.

Born in Guyana, he grew up in Toronto where he was a nationally ranked high-school track and field athlete.

Dr. Blake, a World War II veteran, Buddhist monk and psychologist, was ordained a samanera (novice monk) at a Sinhalese centre in London, England in 1955.

He received the full ordination as a bhikkhu (Buddhist monk) monastery in Bangkok, Thailand, in 1956.

He emigrated to Canada in 1966 and worked as a psychologist at Whitby Psychiatric Hospital for several years, and then at Oshawa General Hospital until his retirement.

Cressy has been involved with the not-for-profit sector and academic sectors for 50 years.

As a youth worker in Trinidad, he helped to build the first YMCA on the island, which opened on April 6, 1964.

He and his wife, Joanne Campbell, spearheaded the building of the first YMCA in Tobago, which was opened in August 2010 and provides service for over 1200 youth and adults weekly.

Cressy co-founded the Nelson Mandela Children’s Fund and played a key role in bringing Nelson Mandela to Toronto to speak to 50,000 students at the Skydome.

He is a founding co-chair of the Harmony Movement, which takes diversity training to schools across Canada, and has served on such boards as the Urban Alliance on Race Relations, the Yee Hong Centre for Geriatric Care and George Brown College.

An avid fundraiser, he has led the University of Toronto’s successful $125 million Breakthrough Campaign and is currently president of the George Brown College Foundation. 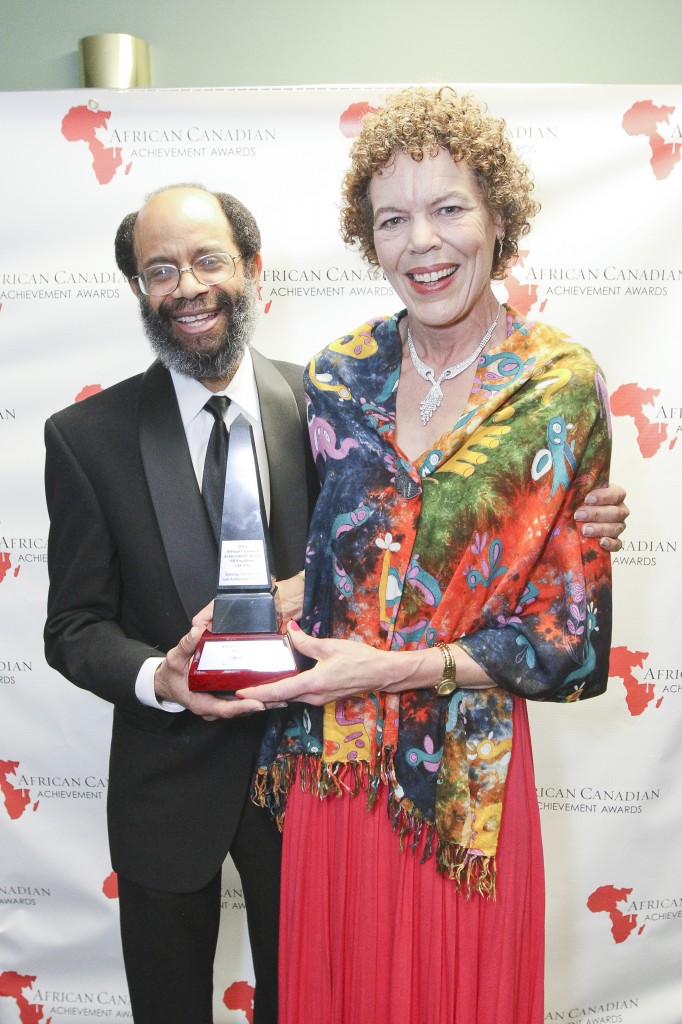 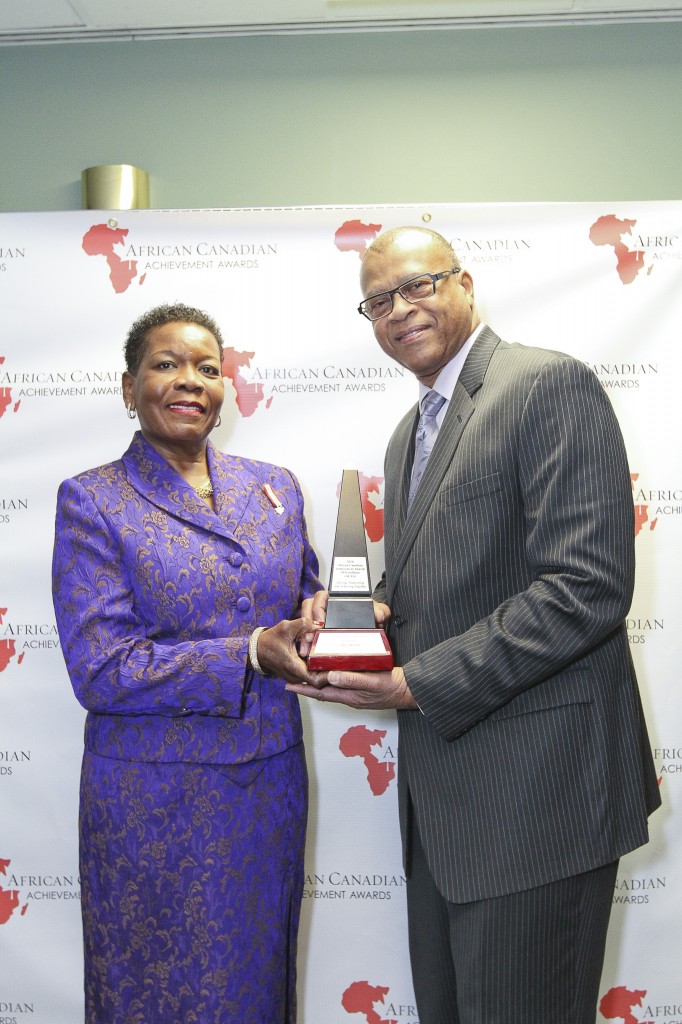 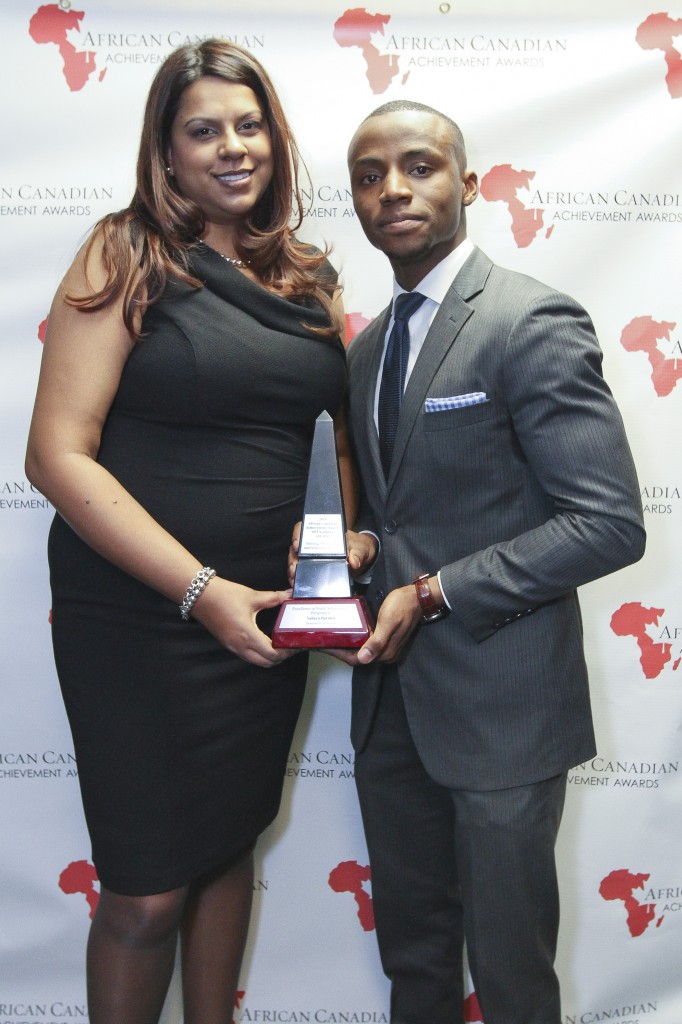 Mills and Sharpe-Mills believe in education as a critical component of life.

The proud parents of three children and four grandchildren lead by example.

John grew up in Antigua and Barbuda and then studied at St. Clair College in Windsor, Ontario, becoming an automotive technician in the 1970s.

He is currently employed with Bosch Automotive Service Solutions as a technical sales specialist.

She spent 25 years caring for patients in oncology units in Toronto, including leading cancer care and research facilities like Princess Margaret Hospital.

Baruwa, a psychology graduate of York University, is committed to giving back to the world with the intention to have a lasting, positive impact on individuals, both directly and indirectly.

The author of the novel, Struggles of a Dreamer: the Battle between a Dream and Tradition, has plans to release two more this year through his company, Tapestry House Publishing.

Michael Van Cooten, ACAA founder, chair and CEO, said the award recipients were symbols of inspiration for young people to pursue their dreams.

Joan Pierre, president and executive producer of the ACAA, said her resolve to fight racism and injustice has been renewed after visiting South Africa in 2013, which was her passion since her 60th birthday, and feeling a connection to the people and their struggles for freedom.

She challenged patrons to fight against racism and injustice and to not be afraid to “speak truth to power.”

The emcees were Allan Jones and Sheryl Bernard while Shaina McPherson and Natalie Morris sung the Canadian and Black national anthems.