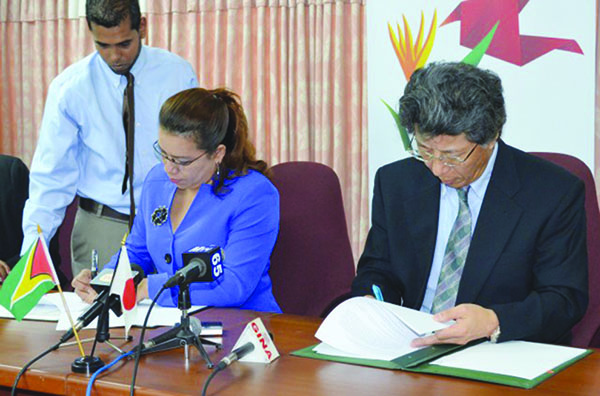 GEORGETOWN, Guyana CMC – Japan is providing an US$2.9 million grant to Guyana that will allow the Caribbean Community (CARICOM) country to make funds available to the private sector at low interest rates.

Foreign Affairs Minister, Carolyn Rodrigues-Birkett, who signed the agreement with Japanese Ambassador, Yoshimasa Tezuka, said that this assistance is yet another manifestation of the friendly relations between the two countries.

A government statement said there is already an  agreed list of items that can be purchased by members of the private sector who are desirous of accessing the financing. These include: civil engineering equipment and electrical power machinery that are necessary to drive infrastructural works.

Officials say the funds garnered from the repayment of the loans to the private sector would be used on developmental projects in the country.

Tezuka said that Japan remains committed to the development of the region through investment.

2014 marks two decades since the first Japan-CARICOM Consultation was held in 1993. The event is being commemorated as “Japan-CARICOM Friendship Year”.