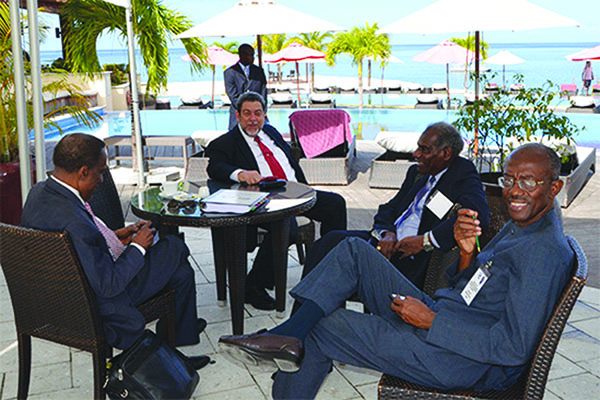 KINGSTOWN, St. Vincent CMC – Caribbean Community (CARICOM) leaders are hoping to hold talks with Europe in June on the issue of reparations for slavery and native genocide, St. Vincent and the Grenadines Prime Minister Dr. Ralph Gonsalves has said.

“I would say that we made good progress on that issue, and, before the end of June, some approach is going to be made to the European countries in relation to this matter of reparations,” Gonsalves told journalists at the end of the first day of the two-day CARICOM inter-sessional summit here.

Gonsalves said that the regional leaders are expected to continue discussing the issue on Tuesday with the main focus being on a budget for the regional commission on reparations for African slavery and native genocide.

The leaders who will meet in caucus on Tuesday, had also adopted a 10-point reparatory justice framework, presented by Professor Sir Hillary Beckles, head of CARICOM’s Reparations Commission.

He said the framework comprises “basically issues relating to things which have been talked about all the time like an apology, the question of organizing with African countries and those persons who want to have reparations, matters relating to health, education and literacy, building the cultural institutions and matters concerning a special program for the development of the indigenous people…”

CARICOM would continue its research even as it seeks the conference with Europe.

At least 14 CARICOM member states have set up national reparations commission even as some Europeans countries against which claims are being made have said that they will not pay compensation for slavery and native genocide.

“We believe we have the law and the facts on our side in relation to addressing the legacy of native genocide and African slavery and we will make our case,” said Gonsalves, who is also an attorney.

“It is a serious proposal, with serious issues, within the same context of not fighting anybody,” he said of Beckles’ presentation.

“These things never come easy but these are 14 sovereign countries representing 16 million people with a huge Diaspora in the United States, in Canada, in Europe. I think we have some influence. I am satisfied and we are satisfied that we have the law on our side, and we have the acts on our side.”

CARICOM has said that it will opt for litigation if Europe refuses to negotiate and Gonsalves, who is also Chairman of the 15-member regional grouping, said the conference in June will be “a mature conversation with the Europeans” and that CARICOM is hoping that the Europeans will agree to the conversation.

“And then after that conversation, we will make a formal claim,” he said.

A British law firm Leigh Day is expected to lead the region’s legal battle against Europe.

Gonsalves said that the regional leaders at the end of their first day of deliberations had made progress on a number of agenda items including agreeing to a road map for a single information and communication technology (ICT) space in CARICOM and to link ICT in a coordinated manner with education and production.

“We are a little behind the curve with ICT,” Gonsalves said, adding that the region has, however, done tremendous work over the last few years.

Trinidad and Tobago’s Prime Minister Kamla Persad Bissessar told reporters that the leaders had agreed to recommendations by the Council on Trade and Economic Development (COTED) on ICT that had been established by the leaders.

“Today coming out of the report by that working group we agreed to recognise that the digital economy provides an important key to changing the economic profile of the region and in general innovation and competitiveness.

“We agreed that the priority areas of focus in building the digital economy during the period 2014-2019 would include…establishment of a single CARICOM ICT space to enhance the environment for production and investment; bringing technology to the people and transforming them to digital entrepreneurs”.
She said the leaders would also discuss further, legislation on cyber security legislation.

She said the leaders had also mandated that COTED-ICT “oversee the development and implementation of the road map on the single ICT space and that the road map be presented for consideration at the July 2015 conference of heads”.

She said that national councils on ICT should consider ICT development initiatives at their meetings in 2014 and 2015 “to ensure that sustained attention is given to this critical sector during that period”.

The regional leaders also received a preliminary report from the Commission on the Economy, including suggestions on addressing debt management, and fiscal consolidation.

“Darcy Boyce of Barbados did tremendous work to bring us a series of suggestions relating to the priorities, how to address them. The question of debt management, fiscal consolidation, several ideas and we discussed that document and adopted it, Gonsalves said.

Barbados Prime Minister Freundel Stuart, who has lead responsibility for the CARICOM Single Market and Economy (CSM), also presented the report of the prime ministerial subcommittee on the CSME that Gonsalves said “intertwined with several of the issue regarding the Commission on the Economy and that was also accepted.

“Basically, (we are) deepening the integration process, working on the priorities in a joint way. In other words, there is not a pause, we are addressing the built-in agenda within the Treaty and moving as fast as we can possible move,” Gonsalves said.