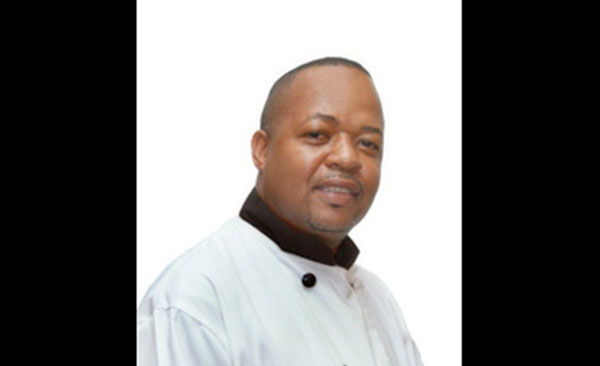 The reception area of the St. Lawrence Centre for the Arts was recently transformed into a locale of epicurean pleasure when chef, Selwyn Richards, launched his cookbook, The Art of Cooking — Soul of the Caribbean.

The book, his first, is described as one that “tastefully draws upon the aromas, flavors and textures of the Caribbean, providing both novice and experienced cooks with readily available ingredients they need to bring a little bit of the Caribbean to their table.”

Justice Donald McLeod of the Ontario Court of Justice was the emcee.

If Richards had not chosen cooking, he would have probably been an engineer as that was his initial career pursuit when he emigrated from Jamaica to Canada.

However, he started working in the food industry and at age 21 realized that it came naturally for him to cook delightful meals and would be a good thing for him to do.

Richards says he was always around food because his mother liked to entertain and would cook different menus.

“The weekend was always big at my house because it’s one big revolving door. Saturday was soup day so it was a day when everybody dropped in for their bowl or cup of soup, whether beef, chicken or whatever. I was a finicky eater so I didn’t really eat soup,” he said, noting that his mother would make him something else.

Eventually, she got tired of doing so and told him that he had to eat whatever she cooked but he decided otherwise.

He would set aside pieces of chicken from the batch seasoned by his mother for dinner to fry for himself and eventually his family started liking his sandwiches and fried chicken.

Growing up in Spanish Town, Jamaica, Richards lived near to a bakery where his mother would buy fresh bread, hot and steaming, which was the base of his sandwiches.

One of his aunts used to be the head of the food and hospitality department at the College of Arts, Science and Technology (now University of Technology) and according to Richards, “just being around the people, food seemed to be a natural progression for part of my life.”

Richards studied at George Brown College and went on to become the sous-chef of the CN Tower and played a pivotal role in the opening of the SkyDome in 1989.

He had his own department where he supervised 50 individuals in the production kitchen, which supplied food to different restaurants, SkyBoxes and players.

He did this for five years and then opened The Pepperpot Café in 1994, eventually closing it in 2000.

It was after this that he made the natural segue into catering, founding his company, The Art of Catering, which includes his brothers, Lennox and Travis, and his children.

He believes in creating real legacy and generational wealth by making sure that his family understand the business and are workers in it.

Richards started writing the Catering Bites in which he shared recipes in an e-newsletter and whenever he catered, people inquired about where they could get his recipes.

He jokingly told them that they should wait for the book.

“It’s funny how you kind of prophesy in your own life what’s to come because one of my answers would always be, ‘wait for the book.’ So, then I realize that, ‘you know what I need to write this cookbook’ because all the information that’s in the book was already upstairs in my head.”

Committed to the task, he has been writing the book for the last 18 months but the urgency to finish it came about when he went to Jamaica in June for the diaspora conference and found the publisher.

He was given deadlines and to meet them had to seriously plan his writing to facilitate editing, proofing and photo shoots.

“The thing is because of the shows that I do, I’ve been able to be introduced to all people from all walks of life,” he said.

Richards is this year’s recipient of the Harry Jerome Award for excellence in business, and in 1987 won two silver medals and one bronze medal at the Food & Wine Show.

“The food that I do is pure. It’s not about me. I see myself as a facilitator that’s why I try not to let my ego get into it because when you start thinking its about you, then it stops being about you,” he said.

He has catered over 1,000 events and has worked in numerous prestigious restaurants in and around Toronto.

Richards is known in the film industry as a top-notch food stylist whose work has been featured in movies such as American Pie, Cheaper By The Dozen, and Breakout Kings.

He has also appeared in network shows such as “I Do, Lets Eat,” “Rich Bride, Poor Bride,” Defiance, Nikita, Covert Affairs and Soul Food.

For the past two years, he has presented as a celebrity chef at the Canadian National Exhibition.

The media release for the book notes that, “In the Art of Cooking, he takes the reader on a Caribbean taste melee, which evokes umami-memories, nostalgia, and good times. His encyclopedic knowledge of spices and his attention to detail in food preparation is seen throughout the book, as he carefully explains how to blend ingredients with step-by-step methods.”

GraceKennedy and Jamaica Tourist Board are sponsors of the book.