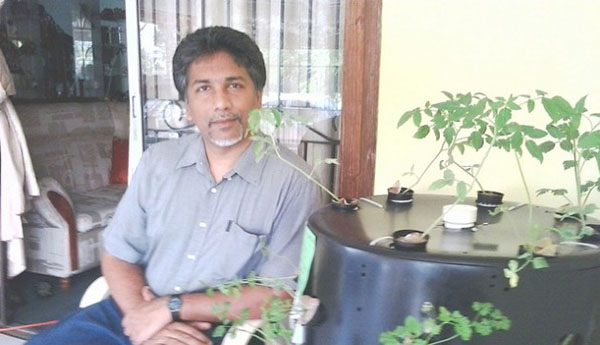 PORT OF SPAIN, Trinidad (IPS) – Industrial engineer Ancel Bhagwandeen thinks that growing your food indoors is a great way to protect crops from the stresses of climate change. So he developed a hydroponic system that “leverages the nanoclimates in houses so that the house effectively protects the produce the same way it protects us,” he says.

Bhagwandeen told IPS that his hydroponic project was also developed “to leverage the growth of the urban landscape and high-density housing, so that by growing your own food at home, you mitigate the cost of food prices.”

Hydroponics, a method of growing plants without soil using mineral nutrients in water, is increasingly considered a viable means to ensure food security in light of climate change.

His project is one of several being considered for further development by the Caribbean Climate Innovation Centre  (CCIC), headquartered in Jamaica.

The newly launched CCIC, which is funded mainly by the World Bank and the government of Canada, seeks to  fund innovative projects that will “change the way we live, work and build to suit a changing climate,” said Everton Hanson, the CCIC’s CEO.

A first step to developing such projects is through Proof of Concept (POC) funding, which makes available grants from 25,000 to 50,000 dollars to successful applicants to “help the entrepreneur to finance those costs that are related to proving that the idea can work,” said Hanson.

Among the items that POC funding will cover are prototype development such as design, testing, and field trials; market testing; raw materials and consumables necessary to achieve proof of concept; and costs related to applications for intellectual property rights in the Caribbean.

A POC competition is now open that will run until the end of March. “After that date the applications will be evaluated. We are looking for ideas that can be commercialised and the plan is to select the best ideas,” Hanson said.

The CCIC, which is jointly managed by the Scientific Research Council in Jamaica and the Caribbean Industrial Research Institute in Trinidad and Tobago, is seeking projects that focus on water management, resource use efficiency, energy efficiency, solar energy, and sustainable agribusiness.

Bhagwandeen entered the POC competition in hopes of securing a grant, because “this POC funding would help in terms of market testing,” he explained.

The 48-year-old engineer says, he wishes to build dozens of model units and “distribute them in various areas, then monitor the operations and take feedback from users.” He said he would be testing for usability and reliability, as well as looking for feedback on just how much light is needed and the best locations in a house or building for situating his model.

“I would then take the feedback, and any issues that come up I can refine before going into mass marketing,” he said.

Bhagwandeen’s model would enable homeowners to grow leafy vegetables, including herbs, lettuce and tomatoes, inside their home or apartment, with minimal expense and time.

The model uses smart electronics, meaning that 100 units can run on the same energy as a 60-watt light bulb, he said. So it differs from typical hydroponics systems that consume a great deal of energy, he added. His model can also run on the energy provided by its own small solar panel and can work both indoors and outdoors.

Bhagawandeen said his model’s design is premised on the fact that “our future as a people is based more and more on city living and in order for that to be sustainable, we need to have city farming at a family level.”

A U.N. report says that “the population living in urban areas is projected to gain 2.6 billion, passing from 3.6 billion in 2011 to 6.3 billion in 2050.” Most of that urban growth will be concentrated in the cities and towns of the world’s less developed regions.

To meet the challenges of climate change adaptation, the CCIC “will support Caribbean entrepreneurs involved in developing locally appropriate solutions to climate change.”

Bhagwandeen said that support from organisations like the CCIC is critical for climate change entrepreneurs. “From the Caribbean perspective, especially Trinidad and Tobago, we are a heavily consumer-focused society. One of the negatives of Trinidad’s oil wealth is that we are not accustomed to developing technology for ourselves. We buy it.

“We are a society of traders and distributors and there is very little support for innovators and entrepreneurs.”

He said access to markets and investors poses a serious challenge for regional innovators like himself, who typically have to rely on bootstrapping to get their business off the ground.

Typically, he said, regional innovators have to make small quantities of an item, sell those items, and then use the funds to make incrementally larger quantities. “So that if you get an order for 500 units, you cannot fulfill that order,” he said.

The Caribbean CCIC is one of eight being developed across the world.