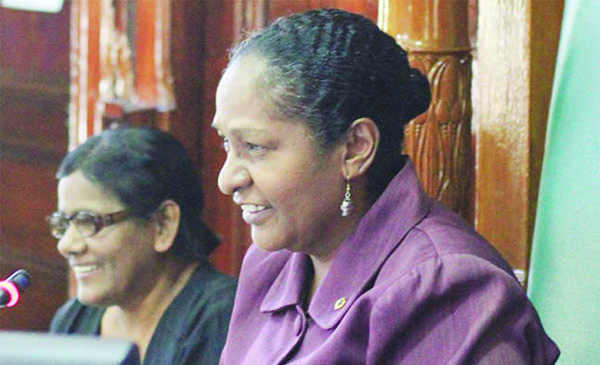 GEORGETOWN, Guyana CMC – The former Deputy Speaker of the National Assembly, Debra Backer, has died a few weeks after she resigned because of illness.

A statement from the main opposition People’s National Congress Reform (PNCR) last Friday, confirmed that its long standing executive member, who had to be flown overseas on several occasions for treatment, had died. She is reported to have been suffering from cancer.

The party said it would issue a “more detailed statement later”.

Backer entered political life during the tenure of the late PNC President Desmond Hoyte and earlier this month, she was among several women honoured by Parliament to mark International Women’s Day.

She was recognized for her 14 years of service as an MP. Her daughter Natasha Backer collected the award on her behalf.

Speaker of the National Assembly, Raphael Trotman, told the Guyana-based website, Demerara Waves.Com, that he was shocked at the death of the former attorney and legislator.

“This death has hit me in an acute and personal way and Debbie was to me the best sister, the best friend, the best colleague and the best comrade I could have asked for and so I express my condolences to her children, her husband and the entire National Assembly would honour her in the coming days,” he said.

Home Affairs Minister Clement Rohee praised her contributions as a “good fighter” on behalf of her party and he credited her with contributing to the architecture of Guyana’s security sector in the National Assembly.