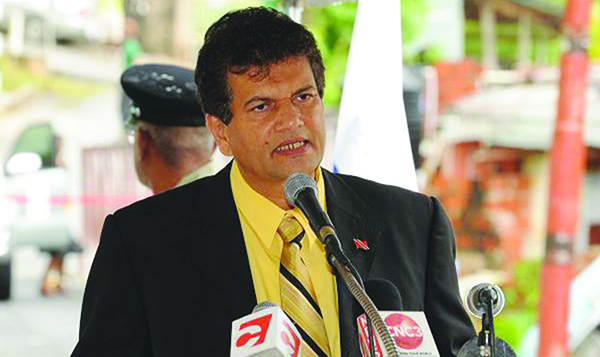 PORT OF SPAIN, Trinidad CMC – Chandresh Sharma, on Monday night, promised to remain silent on the issues that led to his resignation from the cabinet of Prime Minister Kamla Persad Bissessar, promising nonetheless to “continue privately to clear my name in the interest of justice”.

“No further public statement on matters pertaining to the alleged incident will be made as it is entirely a matter for my attorneys to handle,” said Sharma, the former tourism minister who became the second cabinet minister to lose his job within a week.

Prime Minister Persad Bissessar, who flew out to Panama on Monday evening, has already announced his replacement in a minor cabinet re-shuffle. Former Information Minister Gerry Hadeed has been named as the new tourism minister while Vasant Barath has had information added to his trade and investment portfolios.

Police confirmed that they were investigating Sharma after a 30-year-old businesswoman, with whom he allegedly had an affair, claimed he had assaulted her in a car park on March 12.

His removal from the cabinet followed that of Dr. Glen Ramadharsingh, the minister of the People and Social Development, who was booted out of office for his disorderly conduct on board a Caribbean Airlines (CAL) domestic flight this month.

In his statement, Sharma said he was always of the view that his entry into public office was about service to the people not about me.

“Some say it is a thankless task, but for me each day brings a level of satisfaction that is immeasurable.

I have served my country faithfully and selflessly for close to two decades. During this entire period my personal life has never been the subject of public discourse. I am not the story; the work I do is the full account of who I happen to be.”

But he acknowledged that public life comes with a level of scrutiny and expectation that does not allow for consideration of your version of events.

“With the stories swirling around on my personal life even seeking to clarify the issues through statements will undoubtedly be countered by others. So that is not an option. I will not allow these allegations to detract from the good work of the government nor to sully the name of my party. Anything I attempt to say on the matter will only serve to feed the issue,” Sharma said.

Sharma said he was a “firm believer in karma and trust that the future will work itself out through the life I have lived, the judgement of which I leave ultimately to God”.

But Sharma’s former colleague, Austin Jack Warner, who now heads the Independent Liberal Party (IPL) said that he welcomed the news that Sharma’s appointment had been revoked and his actions the basis of a police investigation.

“Sharma’s resignation offer and the acceptance of his resignation by the Prime Minister conform with the requirements of the Westminster traditions and of other respected democracies where ministers who engage in conduct – whether in public or in private life – that bring the government into disrepute are required to resign or to be fired,” Warner said in a statement.

“The ILP believes without doubt that the recent revelations of misdeeds and misconduct by members of the People’s Partnership Administration is just the tip of the iceberg of scandals for this government and we would not be surprised if more Ministers fall from grace in the upcoming weeks and months as a result.

PNM public relations officer, Faris Al-Wari, dismissed the “public relations spin” he said the prime minister had sought to give when announcing Sharma’s removal from her Cabinet.

“Sharma’s dismissal or resignation, whichever it may be…stands as the 15th member of the UNC (United National Congress) led government to fall.

“What is very spectacular in this circumstance is that the prime minister has had nothing to say prior to the statement. She allowed Mr. Sharma by her statement to tender his resignation which she has accepted,” Al Wari said, noting that had not been the case when former High Court judge Hubert Volney, was fired and who had indicated he had submitted his resignation before her announcement of his dismissal.

“What is spectacular as well is that the prime minister sits as the Chairman of the National Security Council and therefore it stands to reason she ought to have known about this incident concerning a senior Cabinet minister and a long standing representative in the Parliament from the Commissioner of Police long ago and certainly just after March 12 when this happened,” he said.

Media reports said that Sharma had assaulted Sacha Singh, the managing director of a security firm.

Acting Police Commissioner Stephen Williams confirmed that an investigation into the matter had been launched after the woman reported the incident to the police. She claimed that she was “knocked out after being pushed” by Sharma during an argument involving her and two other people.

Singh, who appeared on television on Sunday night, said that Sharma should publicly apologize “for his outright assault against me”.

Singh alleged that she confronted Sharma with a woman with whom he allegedly had an affair and a 12-year-old child from that relationship whom he refused to maintain and when she did this, he became violent.