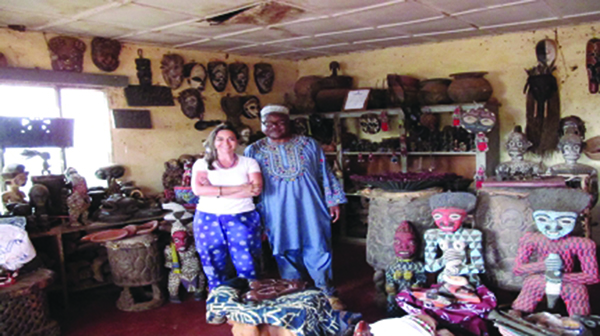 Symposium, gallery on Africa to examine issues of representation

TORONTO, Ontario – The Royal Ontario Museum celebrated its 100th birthday last week with an announcement of plans for four legacy projects that will transform how it welcomes and interacts with its visitors.

The museum, which opened to the public on March 19, 1914, will celebrate its centennial with the Welcome Project that will enhance its interior lobby and create a new performance space which will function as its first “outdoor gallery.”

The proposed design will also enhance the area with biodiversity gardens and community gathering areas. Preliminary work on the new lobby will begin shortly.

The other centennial legacy projects include plans to deliver the future Gallery of Early Life which will change the way visitors learn about the most ancient living things, a Director’s Fund for investment in museum innovations such as digitizing the ROM’s collections for greater access, and a Programming Fund that will be used to animate the museum’s eight centres of discovery.

“For one hundred years the ROM has connected visitors to their world and each other,” said Janet Carding, director and CEO of the ROM. “Inspiring curiosity, sharing discoveries, leading ground-breaking research and connecting communities has always been our goal. And, it’s as true today as it was when we opened in 1914.”

The year-long celebrations include ROM Revealed Weekend, “a once-in-a-lifetime chance to go behind the scenes of the ROM and see the encyclopedic breadth” of its collections and research, May 2 – 4.

The ROM’s centennial projects will be supported by Love the ROM, a new $15M philanthropic campaign to celebrate the museum’s centennial and create lasting legacies for the next generation.

Dr. Silvia Forni, curator of anthropology in the ROM’s department of world cultures, says she is working on a project related to Africa with some community consultant curators to develop a multi-platform, multi-year program that is still in the making.

Forni is also the curator of the African collection and responsible for the permanent and rotating display of African artworks in the Shreyas and Mina Ajmera Gallery of Africa, the Americas and the Asia Pacific.

They will launch a website with all the planned activities and they are now working on a symposium for the end of October entitled, “Of Africa – Really” that will explore issues of representation and presentation of Africa and people of African descent all over the world in museums, popular culture and various artistic forms.

“At the same time, we’re going to reinstall a small part of the Africa gallery because 2014 is almost 130 years since the Berlin Conference. And, this is a story that really, very deeply affected, and continues to affect and influence the lives of people from various African countries. So, it was an opportunity to use that event – that is also somewhat the origin, if you want, of most collections of African material outside of Africa – to discuss really the influence of colonialism from the origin to today.”

The Berlin Conference of 1884–85 ushered in a period of heightened colonial activity by European powers, while simultaneously eliminating most existing forms of African autonomy and self-governance.

The assistant professor of anthropology at the University of Toronto said it would also be a reframing of the Africa gallery and they hope that it will become an educational opportunity to talk to various students who visit the ROM about that history.

They are also planning a contemporary art installation that will open in February 2015 and stay up for at least six months.

The plan is to feature a contemporary African Canadian artist that will engage with this idea of history, representation, and self-presentation in their own specific way.

Dr. Forni said it’s an evolving program and plan, and they hope to add to it.

“A real dream in the long run would be to have a contemporary African and Caribbean art exhibition that really would help us to present the continent of Africa and the diaspora in a new and more thought-provoking light than what’s usually possible within museums.”

She said there are always issues such as funds, fundraising, sponsors and things of that sort to consider.

The curator said that with this project they are trying to build a broader community of interest around the African collection at the ROM and the relevance that it may have for the Caribbean and diasporic community here in Canada.

“Is it relevant or not? This is the kind of dialogue that we would like to initiate, to see really how can we use this material and richness that we have to really serve better the community, from the kids to the adults and create stronger sense of identity and belonging to Canada, to the ROM,” she said.

In February, under the “Of Africa” umbrella, the ROM held a screening of The Colonial Misunderstanding, a film by Jean-Marie Teno, a Cameroonian filmmaker, that sheds light on the complex and problematic relationship between colonization and European missionaries on the African continent.

The evening concluded with a discussion of the film’s relevance to both film and African studies, with Professor Aboubakar Sanogo of Carleton University in Ottawa.

Forni acknowledged that these conversations will be less of a draw than the popular dinosaurs exhibition but she would like people to come to the ROM for Africa.

“It’s really something that can only work with the collaboration of the community and that’s why I’m thrilled that this is not a ROM project, this is a collaborate project that the ROM is doing with the community and the people who have come to us and said, ‘okay, we want to part of this and help develop things so that the message is spread more.’”

The curator said this could be as welcoming and as off-putting depending on where you stand in the big museum.

Dr. Forni said it is about making the ROM more accessible and friendlier to people who wouldn’t necessarily feel that they belong here.

She noted that Africa was part of the core collection of the ROM from the very beginning and it is something that they all feel need to be promoted in the best possible way.

Since joining the ROM in 2008 she has curated the partial gallery reinstallations Proverbial coffins from Ghana (2011); Community Spectacles: Puppets, Masks, and Musical Instruments from the Amrad Collection of African Art (2011) and For People, Spirits, and Gods: Yoruba Ritual Art from the Jack and Iris Lieber Collection (2011).

She has also worked on a number of exhibition projects focusing on African and African Canadian themes including Carnival: From Emancipation to Celebration (2011); El Anatsui. When I last wrote to you about Africa (2010); Position as desired – Exploring African Canadian Identity: Photographs from the Wedge Collection (2010); Stitching communities. African Canadian quilts from Southern Ontario (2009).

Her research focuses on the significance of art objects and material culture as part of a network of exchanges that define regional cultural identities in sub-Saharan Africa as well as the way Africa has been constructed in the Western imagination.

The ROM does not have a Caribbean collection, which she said is a “structural missing part and, likely, is not going to necessarily have a Caribbeanist curator for a while because we are shrinking rather than expanding in this moment of economic slimness.”

She said Caribbean exhibitions are usually the result of dialogues and community involvement.

Carnival: From Emancipation to Celebration originated from the serendipitous encounter with Brian MacFarlane, legendary Trinidadian carnival artist, and the involvement of the Toronto Caribbean Carnival.

“We would like, in the horizon, to do a larger Caribbean exhibition but it is really at this point more a thought than a real plan. Also, because, I think, in house we do not have the real expertise.”

She noted that formerly she is the curator of Africa but feel humbled to have that label because it is such “a big, complicated, complex, continental reality and I could never dare to say that I’m an expert on Africa.”

However, the curator said there is room for dialogue and partnerships for exhibitions related to the Caribbean.

Forni said the ROM calls itself an encyclopedic museum but “we are an encyclopedia that doesn’t have all the chapters, we have many chapters but we cannot possibly cover the world in a building.”

She said historically the Caribbean materials and arts were not collected, were not part of the ROM, and have not come to the ROM in recent times so it is a dialogue that needs to be continued.

The ROM is Canada’s largest museum of natural history and world cultures with more than six million objects in its collections and over 30 galleries.

Among its artifacts are the ancient Egyptian Book of the Dead which is five metres in length, the Bust of Cleopatra VII, a rare Ptolemaic granite bust; and the Statue of Sekhmet, a magnificent example of Pharaonic sculpture.