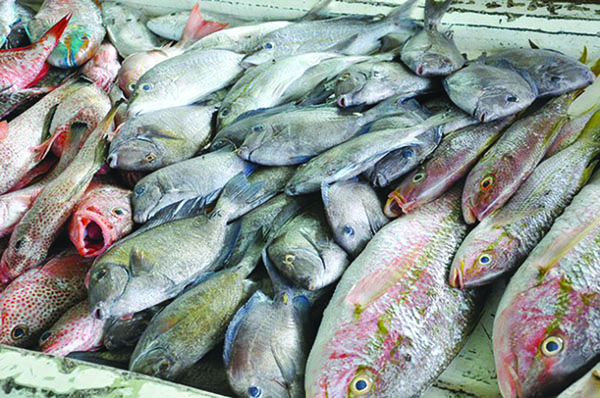 CODRINGTON, Barbuda (IPS) – A marine biologist has cautioned that the mass deaths of starfish along the United States west coast in recent months could also occur in the Caribbean region because of climate change, threatening the vital fishing sector.

Since June 2013, scientists began noticing that starfish, which they say function as keystone species in the marine ecosystem, have been mysteriously dying by the millions.

“The cause of the starfish die-off which is taking place in the Pacific Ocean is not known at this time but it could turn out to be from a number of factors including climate change,” John Mussington told IPS.

“If it turns out that climate change factors such as ocean warming are indeed implicated in the starfish die-off, then there is the possibility that the same thing could happen in the Atlantic and affect Caribbean species.

“We are living in an era when the predicted consequences of climate change are now reality. Large scale die-off of starfish can therefore happen to us in the Caribbean,” Mussington added.

Starfish play a key role in marine ecosystems. They eat mussels, barnacles, snails, mollusks and other smaller sea life so their health is considered a measure of marine life on the whole in a given area. Starfish are in turn eaten by shorebirds, gulls, and sometimes sea otters.

Mussington explained that something similar to what’s happening in California has happened in the region before.

He told IPS that in 1983 there was a Caribbean-wide die-off of the black sea urchin, spreading from as far north as The Bahamas right down the chain of islands to the south.

“The long-spined sea urchin was a keystone species in the Caribbean marine ecosystem, similar to the affected starfish in the Pacific-California ecosystem. The designation as ‘keystone’ is due to the fact that if there is anything affecting their large populations, then this can be interpreted as a reliable indication of problems in the entire ecosystem that will likely affect other species,” Mussington said.

“Something went very wrong with our Caribbean marine ecosystem in 1983 and the black sea urchin was wiped out – the species is considered today to be functionally extinct. With the decline of this keystone species, the Caribbean has seen significant decline in its coral reefs and the marine communities they support, including economically important commercial species.”

Mussington said the spiny urchin grazes on algae and it is important to control the number of algae on coral reefs.

Habitat degradation, specifically of coral reefs, has been cited by numerous studies as the primary cause of ongoing fish declines of Caribbean fish populations.

Caribbean coral reefs have experienced drastic losses in the past several decades. Fish use the structure of corals for shelter and they also contribute to coastal protection.

Established research has predicted that the communities located in coastal areas, as well as national economies in the general Caribbean region, are likely to sustain substantial economic losses should the current trends in coral reef degradation and destruction continue.

It has been estimated that fisheries associated with coral reef in the Caribbean region are responsible for generating net annual revenues, which have been valued at or above approximately 837 million Eastern Caribbean dollars, or about 310 million U.S. dollars.

“There has to be some balance and once you have a major species dying off, it’s going to have repercussions for the entire system. We must not forget that man is an integral part of this system and the repercussions for us will be serious,” Mussington told IPS.

The fisheries sector in the CARICOM Region is an important source of livelihoods and sustenance. The local population is highly dependent on this resource for economic and social development. This resource also contributes significantly to food security, poverty alleviation, employment, foreign exchange earnings, development and stability of rural and coastal communities, culture, recreation and tourism. 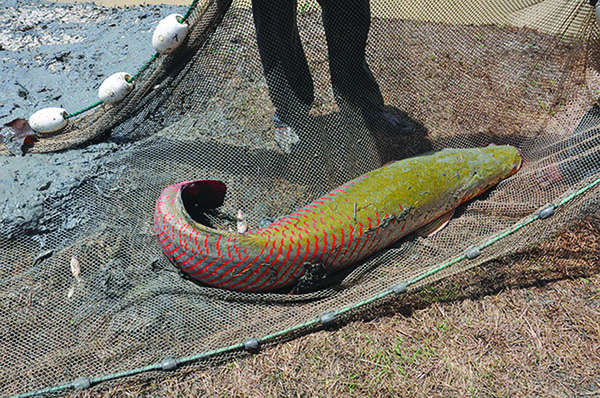 An Arapaima, the world’s largest freshwater fish, being kept in a man-made pond in Guyana. The Arapaima can weigh over 800 pounds and reach lengths of up to 10 feet. Unfortunately, they’ve been overfished commercially and are currently a threatened species. Photo credit: Desmond Brown/IPS.

“The Caribbean Sea, home to a vibrant ecosystem benefitting fisher folk, the tourism industry and the region’s people alike is currently threatened,” he said, adding that “over harvesting of fisheries, climate change and pollution from sewage, agricultural runoff and industrial effluent has led to 75 percent of coral reefs in the region being labeled as at risk.”

Acting permanent secretary in Dominica’s fisheries ministry, Harold Guiste agrees, explaining that the future of the Caribbean’s conch and lobster fisheries remains under threat despite regional efforts to protect it.

Guiste blames the problem of overfishing squarely on nations outside the Caribbean that trawl the region’s seas illegally.

“Globally we have noticed a rush to fish accompanied by a lack of responsible behaviour in the fishing sector,” he told IPS. “This type of hooligan behaviour has resulted in severe decline in some major fisheries of the world and collapse in some others.”

The Dominican official called for a collaborative approach to safeguard against the depletion of the region’s already challenged resources.

The spiny lobster trade brings in about 456 million US dollars to CARICOM nations but demand has led to overfishing of a once healthy stocks.

While admitting that “some factors are out of our control as it relates to mitigating against global warming”, Mussington said both developing and developed countries need to do more.

“We need to do things which will discontinue the rise in global temperatures and those things that need to happen have to do with less use of fossil fuels and modification of certain things that countries do,” he told IPS.

In fact, the persons who are going to be suffering most – the people living in these Small Island Developing States – we are not the ones ultimately responsible in large measure for the problems we are having now, the developed countries are.”

“So far the developed countries have been very resistant to implementing those policies and changes that need to happen,” Mussington added.

In the end, he said the annual Conference of the Parties (COP) negotiations should not be simply about the smaller countries winning.

“It’s a fight that the world has to win if it is to survive because if the small states don’t win, it means that the globe as a whole does not win, which means that Planet Earth will lose out and the human race on planet earth might very well face total extinction,” warned Mussington.

“That’s what’s facing us. The globe will become unlivable,” he added.