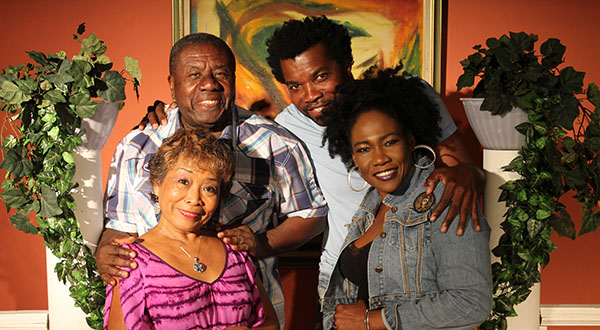 TORONTO, Ontario – Boasting over 40 years’ experience in the business of entertaining, Oliver Samuels, irrefutably a Jamaican cultural icon, is celebrating his 65th birthday, in Toronto on Mother’s Day weekend, with a new comedic play, Dolly House.

Jamaica’s “King of Comedy” has assembled, what can easily be described as, the most powerful cast of actors available in Caribbean theatre today, and created a potential theatrical blockbuster.

Dolly House is a wonderful mix of Jamaica’s favorite topics – politics, power, intimacy, race, class, mistrust and betrayal – all comingled into one hilarious comedic stew, with the belly-cramping humor that has become Samuels’ signature.

It is well documented that Samuels’ Embassy Saga is one of the funniest plays in the history of Jamaican theater and, when asked how Dolly House measures up to it, the veteran, venerable actor – dare we say “senior” – methodically leaned over and spoke directly into the microphone, quipping with a smirk: “Unu jus ain’t seen nutten yet.”

After the phenomenal success Samuels had with his last two productions – Who A Di Don? in 2011 and Embassy Saga in 2013 – many theatre-goers and critics openly questioned, “How would Oliver be able to follow up on his back-to-back monster hits?”

Who A Di Don? opened in December 2011 and closed 14 months after in April 2013, resulting in more than 250 well-attended performances, highlighted by 9 performances in the New York Tri-state area, four full-to-capacity performances in Toronto and seven shows in the UK, along with repeated stretches of completely sold out performances in Jamaica.

Embassy Saga opened in April 2013 and the curtain came down on the last show on April 13, 2014 – a one-year run! This success occurred despite the company turning down many requests for return performances in the United States, a rural Jamaica run and more stops in the Caribbean, as Samuels said he wanted to celebrate his 65th year with the cast of Dolly House by his side.

Well, with this potent mixture of high-powered cast members, a well-written storyline and a superbly directed play, Samuels is about to prove, once again – conclusively – why he is referred to as a living legend.

The feat of attracting, and contracting, such a star-studded cast of stellar actors, Audrey Reid, Ruth Ho Shing and Dennis Titus, on the same stage – in an entertainment culture that sometimes resembles and epitomizes some of the characteristics of a tenement yard: jealousy, envy, competition and suspicion – attests to Samuels’ business acumen, persuasive personality, charm, leadership abilities, his managerial expertise for bonding together sometimes disparate components and, most importantly, his impeccable reputation.

Veteran Jamaican actress, Audrey Reid, is most popularly known for her role as Marcia in the Jamaican mainstream film, Dancehall Queen, and for her role in Third World Cop. She has had an extensive career in Jamaican entertainment and live theatre, which has led to several overseas tours.

Her impressive repertoire includes Passa Passa Daily (written by Everton Dawkins), which is the third installment of the highly successful Passa Passa theatre performance series. She has also performed in Jamaican comedic and artistic works such as Obeah Wedding, Con Man, Boy Blue, Scandal, Boops and Higglers, Village Rooster, and Some Like It Hot. Her career soared when she joined the theatrical troupe, Oliver Samuels and Friends, with whom she toured the Caribbean.

Reid was voted one of Jamaica’s top female achievers by All Woman, was the recipient of Jamaica’s Actor Boy Award for her role in When the Cats Away, and won the Marcus Garvey Award for Best Caribbean Actress.

The consummate professional, Ruth Ho Shing is one of the most respected thespians still active on the Jamaican stage. She was among the pioneering graduates from the Jamaica School of Drama’s first year of operation and has enjoyed a long and distinguished career, spanning innumerable theatrical productions, musical revues and radio serials.

This accomplished actress has mined several Gold and Silver medals in the Jamaica Festival Speech competitions and has displayed her talents all over the island, the wider Caribbean, many US cities and in England.

She has had distinguished performances in three LTM Pantomimes and 10 Basil Dawkins’ productions: Flatmate, Couples, Feminine Justice, What The Hell Is Happening To Us Dear?, A Gift For Mom, Uptown Bangarang, Uptown Bangarang 2, Which Way Is Out? , For Better Or Worse and A State Of Affairs.

For writer/producer, Louis Marriott, she has done A Pack of Jokers, Last of the Jokers and Playboy. She has also excelled in the Pablo Hoilett Productions, The Making of a Millionaire and The Decorator. Other acting credits include Oliver Large Abroad, Vagina Monologues, The Moon in the Crossroads and Family Affair. 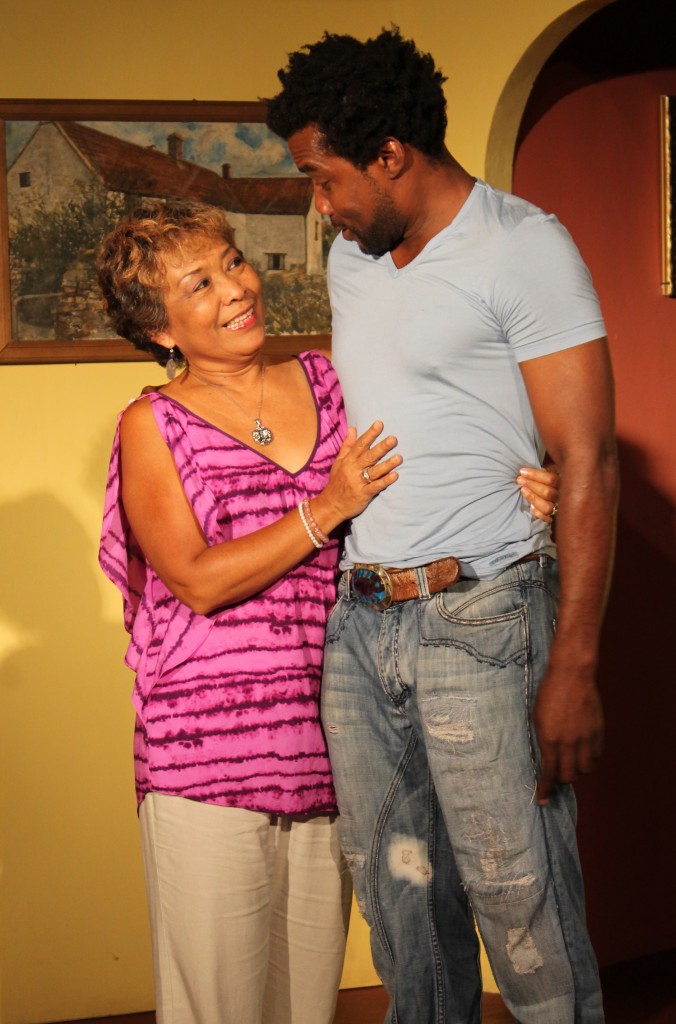 Defeating an impressive field, she copped the 2001 Actor Boy Award for Best Actress in a Lead Role for her compelling performance, as the lawyer, in David Heron’s remount of his Against His Will. She has also earned numerous acting nominations for a variety of roles, and sits on the adjudicating team for the Speech National Finals of the annual Jamaica Festival Competition, as well as for the Miss Festival Queen competition.

Dennis Titus – originally from Manchioneal, a small farming and fishing town in Portland – the first of 10 kids for his parents, fell in love with theatre when he saw Maas Ran for the first time.

That journey actually started the first day as an acting student, at Edna Manley School of the Arts, when he was told by the head of the acting department that he was a very good candidate for dropping out of the course – he finished against all odds.

His career in theatre, television and film spans over 20 years and includes extensive work in the UK and USA. As writer/director, he has mounted a number of plays including Coming to England, currently being considered by BBC as a possible mini-series.

Titus still draws inspiration from his very early, yet memorable, opportunity of working alongside Oscar award-winning Denzel Washington in the Mighty Quinn, an experience which, he says, helped to mold him into a dedicated professional.

And, what else is there to say about the living legend Oliver Samuels: he’s iconic and……..

Samuels became a television staple on the Jamaica Broadcasting Corporation and is best, and most widely, known for the two long-running television series, Oliver at Large and Oliver, in which he played the title roles.

The master entertainer is the National Cultural Coordinator for the Social Development Commission (SDC) in Jamaica, and the City of Hartford, Connecticut awarded him the ‘Official Citation,’ solidifying his unquestionable status as the Caribbean’s premier comedic actor.

Samuels has worked with most of Jamaica’s top writers, producers and directors in productions such as Trevor Rhone’s School Out Carter and The National Theatre Trust’s School for Scandal. The respected funny man has performed the lead roles in plays such as Music Boy, Dickance for Fippance, and The Witch; and has starred in the Jamaican television series Royal Palm Estates and Traxx. He also appeared as Pillion in the Jamaican film, Countryman, and performed the role of Rupert in the film, The Mighty Quinn.

He also directed Devon Haughton’s Old Friends for its USA and Canada performances.

Dolly House is a depiction of the crazy drama, unavoidable tragedies and constant comedy that occurs, daily, in multi-dwelling housing communities in Jamaica, commonly known as “tenement yards”. There is a reason why Jacob Miller said, “The bag of watchy watchy and su su makes it insane for a decent Rastaman to live in such tenements.”

Just imagine the levels of insanity when one is forced to live in a tenement yard with a Samuels character as the stern, overbearing landlord, constantly showing who is the “world boss” of landlords; when occupants include a middle-aged Chinese woman, whose hormones seem larger than her mouth; a young dreadlocks man, who carries five phones and about six different names; a higgler, who insists that her constantly overdue rent for her one room and shared bathroom is only due to her finishing up her four-storey mansion in the hills; and two bad men, who ‘just not into the rent paying thing.’

Insanity, you think? As Oliver says, “You ain’t seen nothing yet”.

Patrons lucky enough to secure a ticket to Dolly House – featuring this accomplished cast of performers – in the global tour hot spots, particularly in Toronto, Florida, New York and the UK, should consider themselves indeed fortunate, says the play’s press release.

Being able to experience this cast first-hand, during the celebration of Oliver Samuels’ 65th birthday, means that one has a chance of, possibly, being a part of Jamaican theater history, the release added.