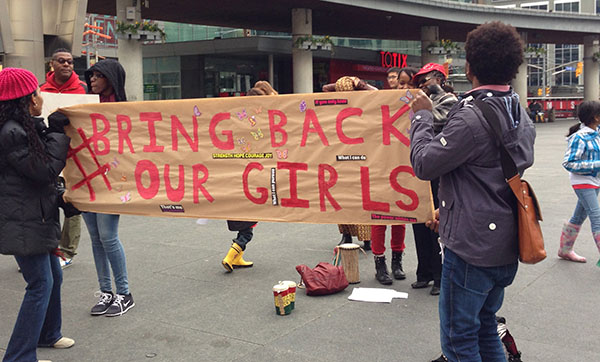 Groups Call For Rescue Of Over 230 Abducted Nigerian Girls

TORONTO, Ontario – Outcry against the kidnapping of 234 Nigerian girls about three weeks ago reached a crescendo this past weekend when groups in cities around the world, including two here in Toronto, held vigils calling for the release of the girls.

A group of concerned citizens held a vigil at Yonge-Dundas Square on Saturday morning to bring attention to the abduction under the banner “Rescue Our Girls.” On Sunday afternoon, African Women Acting (AWA), also held a rally at the same location with a similar call.

Boko Haram militants in Nigeria seized the girls in the dead of the night at a high school in the nation’s far northeast, a hotbed for the Islamist group.

Reports are that the students had been back at the Chibok School to write their final exams.

Armed men herded the girls out of bed and forced them into trucks on April 15 in the town of Chibok. The convoy of trucks then disappeared into the dense forest bordering Cameroon.

Roughly 200 girls are still missing, although the authorities and parents differ on the number.

The BBC News reports that Boko Haram promotes a version of Islam which makes it “haram”, or forbidden, for Muslims to take part in any political or social activity associated with Western society. This includes voting in elections, wearing shirts and trousers or receiving a secular education.

“I’m here today because these are my people and wherever things are happening in Africa and around the world, we know that we need to make the situation known and show they we want our children, that we love our children. We can’t lose these many children and the world doesn’t pay attention,” said Leleti Tamu Russell, while standing with a banner amidst drumming and chants at Yonge-Dundas Square on May 3.

Annie Kashamura Zawadi, a women’s rights advocate, said they are trying to raise awareness so that the government of Nigeria and the international community can do something to find the girls and bring them back home.

“These girls are being sold for very little money. This is back to slavery. How can you sell someone and nothing is done. I believe it’s because women’s bodies, women’s lives still have no value,” she said.

Nigerians have rallied for days to criticize the government’s handling of the rescue efforts. Hundreds wept and chanted “bring back our girls” during protests in the capital of Abuja on Wednesday. A day later, protesters gathered in Lagos.
Shortly after the abductions last month, frustrated Chibok residents went into the forest in motorbikes to search for the girls.

During their nine-hour trek, they never saw a single soldier in the forest where authorities believe the militants took the girls, said Enoch Mark, whose daughter and two nieces were among the kidnapped.

“A total of 230 parents registered the names of their daughters who were missing on the day of the kidnap,” said Asabe Kwambura, principal of the Government Girls Secondary School. “From my records, 43 girls have so far escaped on their own from their kidnappers. We still have 187 girls missing.”

The girls range from ages 16-18. There is concern that these young girls are experiencing sexual violence at the hands of Boko Haram and run the risk of being trafficked to Europe, being held in neighboring countries under duress, being forced into marrying the rebels and other atrocities.

“I am here because I want our African girls to get back home. I think that sometimes when it comes to our black women that’s not a priority globally so I have to make sure that I’m here to support and try to get other people to come out,” said Verlia Stephens at Saturday’s vigil.

Dr. Marilyn Patricia Johncilla said she was at the vigil to help bring back the girls that were stolen.

“If it were other girls of other ethnicity, race, I’m sure something would have been done quickly but we have to get our girls back. They are our future leaders, mothers, grandmothers, engineers, entrepreneurs. We need to get them back. They need to be rescued. Nigeria needs to do something. Jonathan, the president of Nigeria, he needs to do something,” she said.

Last week, Canada’s foreign minister, John Baird, blamed and condemned Boko Haram for what he called an “absolutely repugnant” act and expressed concern for the safety and wellbeing of the girls.

She said Canada’s condemnation of the abduction is not enough, instead she wants the government to use its resources. “Word of mouth, giving voice to something, that’s not good enough. We need action now.”

Karen Tomlinson, organizer of the vigil, said she was prompted to do something tangible after not getting any information about the women that were kidnapped.

“I was saying to myself, could you imagine if something like this happened in Australia or in another country where the people are white or non-black, that there would be an uproar. I notice that there wasn’t really an uproar about these young women,” she said.

Adrian Worrell, who was handing out fliers about the plight of the Nigerian girls in from of the Eaton Centre, said he was there to support friends who planned the vigil but also to get more information about the situation.

“I understand that it’s been a conflict that has been going on for at least ten years and now its escalated to the point where the attacks have become more brazen and young people, girls in particular, are being targeted for kidnapping. So, hopefully this incident will raise awareness and people can apply pressure in certain kinds of ways to …the conflict entirely so that people are less vulnerable in this way.”

The group said it was collectively pushing against the tide of extremism and harm to racialized women and girls.

“Let us take all the systems to task to bring a resolution to this issue. This is a race against time and a challenge of visibility and resources to engage multiple levels of government in a rescue effort,” it said in a media release.

The group wants to pressure the Canadian government to commit resources and advocacy to rescue the girls and get them back to their families.

“As active citizens we acknowledge the role and influence Canada has globally and we call upon our political representatives to advance the efforts to bring our girls home. This is one of the most severe forms of abduction we have witnessed and the global outcry is just building 2 weeks later. We cannot afford to sit idly by as this is time sensitive,” it said.