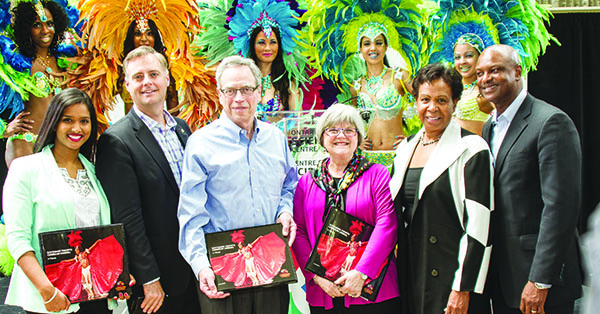 TORONTO, Ontario – The Scotiabank Toronto Caribbean Carnival will have several new features this year, including a return to the Toronto Island.

“The big news is that as the city changes, so too must our events. We are expanding the length of the parade within Exhibition Place. The Junior Carnival Parade is moving from Downsview Park for the Malvern community in Scarborough, and our final Island Lime is returning to the Toronto Island after a ten-year absence,” said Denise Herrera Jackson, CEO of the Festival Management Committee, which oversees the running of North America’s largest outdoor festival.

“We are expanding the footprint of the grand parade within Exhibition Place to improve the experience of both performers and spectators.”

Speaking at the media launch on May 22 at the Ontario Science Centre, she said the creative energy of the Caribbean Carnival culture never ends and the cycle of creativity starts immediately after the last carnival across the GTA.

“Ideas appear in words that translate into original calypsos composed for the period of the festival; designs grow from thought into colourful masquerade costumes worn by children and adults at the Junior and Grand parades and elaborate creations at the King and Queen showcase; arrangers are composing music for the steelpan as pannists prepare for the annual Pan Alive showcase; collective energies are directed to ensuring that the Carnival cultural products – mas’, calypso, and steelpan music – live up the expectations of the millions of visitors who are drawn to the Toronto mecca for the annual Scotiabank Caribbean Carnival and contribute to our economy,” said Herrera Jackson.

Joe Oliver, Canada’s minister of finance and also regional minister for the GTA, thanked the carnival for helping the country to balance its budget.

He noted that $400 million is contributed by the carnival and that the economic spinoffs were incredible.

The minister did not, however, say how much the federal government would contribute to the festival which will runs from July 8 to August 3, attracting over a million spectators in downtown Toronto.

Joe Mihevc, Toronto city councillor, said the carnival is central to summer in the city.

He said the city has contributed $500,000 to the festival in the past and this year there will be an increase in the amount.

Mihevc invited the federal government to match the city’s donation that is already matched by the province.

“I think the big thing for us is that we know that we cannot depend on funding. We’re a major big festival and we have to find ways of generating revenue. In fact, that is a major requirement in our funding application. We need to have, according to our funders, we need to show the balance is like 30% funding, 30% sponsorships and 40% revenue generation so that is why when we talk about shutting down Exhibition Place that is a revenue generator,” said Hererra Jackson.

The CEO said the FMC knows that there are other parts of the economy that need support and so it has to make sure that it becomes more self-sufficient and satisfy the requirements of funding.

Chris Alexander, chief administrative officer of the FMC outlined the changes to the festival including a new tour of mas’ camps to give a behind-the-scenes look at how the costumes are designed, to meet the volunteers and to learn the history of carnival.

He said the Junior Carnival Parade and Family Day on July 19 was moved from Downsview Park to Malvern because of construction in the federal park and given the work on the Sheppard and York University subway lines near the park, it was not conducive to hold the event in that area.

“We looked at a number of different areas and Malvern was there with open arms. It was like we just touched Malvern and Malvern just said we are here.”

Alexander said a lot of the mas’ camps are in Scarborough and many people from the West Indian community live there.

“Not only that, the carnival is not just West Indian any more. It’s a Caribbean carnival but the people that participate, if you look at the road every single year, is from every culture. So, they’re getting involved and understanding our culture a lot more. That area is highly concentrated with houses, town houses, apartment buildings and the people are looking forward to it. It’s something that offers a lift in the community,” he said.

“We always want to be in a community like Malvern as we were in Jane and Finch; those communities are where we think we need to move the carnival to give something to the people that they own, it’s theirs. So, Malvern was a perfect choice.”

Hererra Jackson said the junior carnival is a growth activity for young people, an event that showcases them. They are the stage managers, emcees and the performers showcasing their own talents in the carnival arts.

Alexander said the people who pay are there to see the mas’ but at the same time, organizers are not changing the nature of the carnival because when its gets onto Lakehore the same free aspect of the parade that onlookers love will still remain.

“So a little bit of people inside who see what they want to see and if the majority of people want to stay outside and continue to do it the way they normally do, we want to provide that for them also,” he said.

The City Hall public launch takes place on July 8 at Nathan Phillips Square from noon to 2pm and then from 4pm to 6pm.

On July 25, the annual gala will be held to honour the rich history of the festival and to sample the Caribbean arts, at the Liberty Grand Ballroom on the CNE grounds.

Ontario’s best calypso performers compete to see who will wear the crown as this country’s top calypso singer at the Monarch Contest, July 26, at the Chinese Cultural Centre’s P C Ho Theatre in Scarborough.

The King and Queen Contest will be on July 31 with pre and post shows, and Pan Alive will be on August 1. Both events will be held at Lamport Stadium.

Beyond de Lime, the traditional end to the Caribbean festival, will be held on August 3 at Toronto Island and according to Alexander the aim is do it like the Tobago Jazz Festival to showcase different genres of music from the Caribbean.

Rita Cox, veteran librarian, has fond memories of the lime on the island after the grand parade.

“That was one of my favourite parts, after the mas’ and all that, you go there, you take your picnic basket and all your family you take down and you sit and enjoy music and so on,” she said.

The carnival is a three-week cultural explosion of Caribbean music, cuisine, and revelry as well as visual and performing arts. It has become a major international event and the largest cultural festival of its kind in North America.

Meanwhile, the Caribana Arts Group (CAG) has announced that its lawsuits, initiated in 2011 over trademark infringement, with Scotiabank/The Festival Management Committee (FMC), and with the Charles Roach estate have been resolved.

CAG’s Chair, Knia Singh, said the settlement with the FMC and Scotiabank was completed on May 15.  “The Caribana Arts Group views this as positive step for the community and looks forward to taking this matter from the legal context to the communal context.”

Singh said that on December 23, 2013 through a desire to move forward for the advancement of the Caribbean community in Toronto, the CAG and the estate of the late Charles Roach reached a settlement concerning the court matter.

“The commitment by the Caribana Board of Directors to resolve this legal dispute is a strong signal to the community that the Caribana Arts Group highly respects the contributions of the late Charles Roach to Caribana and society as a whole, and wishes to move past the incidents that led to this unfortunate legal matter.”

He said that initiating this lawsuit was extremely difficult for the Caribana organization due to the close historic relationship between Charles Roach and the Caribana festival.

“Charles Roach stood up for Caribana at every opportunity and we are relieved this matter has been resolved.  We look forward to working with the Roach estate to honour the contributions of Charles Roach to the Caribana festival, and to recognize the greater social impact he has had in the areas of law and community activism in Ontario,” Singh said.

Due to a confidentiality agreement, Herrera Jackson could not comment on the matter.

On July 12, CAG will hold the Caribana Flags and Colours – Junior Carnival at Yorkgate Mall in the Jane and Finch community.